WASHINGTON (Reuters) -The U.S. Defense Department dealt a blow to Microsoft Corp on Tuesday when the Pentagon announced it was scrapping the Trump-era award of a $10 billion JEDI cloud-computing project.

The government will hold a new round of bids and allow multiple companies to compete, including rival Amazon.com.

In November 2019, Microsoft beat favorite Amazon for the contract, called the Joint Enterprise Defense Infrastructure Cloud, or JEDI, which is part of a broad modernization of the Pentagon’s information technology systems.

Here is a timeline of important dates leading up to the award:

JULY 26, 2018: The Pentagon released the final request for proposals, seeking a single winner to allow for the most rapid adoption of the technology. The contract, valued at $10 billion over 10 years, was set to be awarded in September.

AUG. 6, 2018: Oracle Corp filed a protest with the Defense Department over its plans to award the contract to a single company instead of allowing for multiple winners, arguing that the Pentagon would be locked into a legacy contract for a decade or more.

OCT. 8, 2018: Alphabet Inc’s Google said it was no longer vying for the contract, in part because the company’s new ethical guidelines did not align with the project, without elaborating.

NOV. 14, 2018: The Government Accountability Office denied the protest filed by Oracle, finding that the agency “reasonably” determined that the single-award approach was in the government’s best interests for reasons including national security concerns and complied with applicable law.

APRIL 26, 2019: Amazon and Microsoft were selected to continue competing for the contract.

AUG. 1, 2019: The Pentagon decided to put on hold its decision to award the $10 billion cloud-computing contract after Trump said his administration was examining Amazon’s bid following complaints from other technology companies.

OCT. 25, 2019: The Defense Department said that Microsoft won the contract.

NOV. 14, 2019: Amazon said it is contesting the Pentagon’s award to Microsoft, expressing concern that politics got in the way of a fair contracting process.

NOV. 15, 2019: U.S. Defense Secretary Mark Esper rejected any suggestion of bias in the Pentagon’s decision after Amazon announced plans to challenge it.

JAN. 22, 2020: Amazon filed a motion in court to pause the Department of Defense and Microsoft from carrying out the deal until a court rules on its protest of the contract award.

FEB. 10, 2020: Amazon sought to depose Trump and Esper in its lawsuit over whether the president was trying “to screw Amazon” when the Pentagon awarded a contract for cloud computing to rival Microsoft.

MARCH 7, 2020: A U.S. judge said Amazon is likely to succeed on a key argument of its challenge to the decision to award the cloud deal to Microsoft.

APRIL 15, 2020: The Pentagon’s inspector general said it could not determine whether the White House influenced the award of a $10 billion contract to Microsoft over Amazon after several officials said their conversations were privileged “presidential communications.”

SEPT. 4, 2020: The Defense Department completed a re-evaluation of its $10 billion JEDI cloud computing contract proposals and determined that Microsoft bid was the best.

APRIL 28, 2021: A judge refused to dismiss Amazon’s claims alleging the Trump administration interfered in the Pentagon’s award of its $10 billion JEDI cloud computing contract to Microsoft.

Training refugees in the culinary arts

Tue Jul 6 , 2021
The Statue of Liberty has watched over New York Harbor since 1886, and the words on her base (“Give me your tired, your poor, your huddled masses yearning to breathe free”) have inspired millions to come here in search of the American Dream … and to leave their nightmares behind. […] 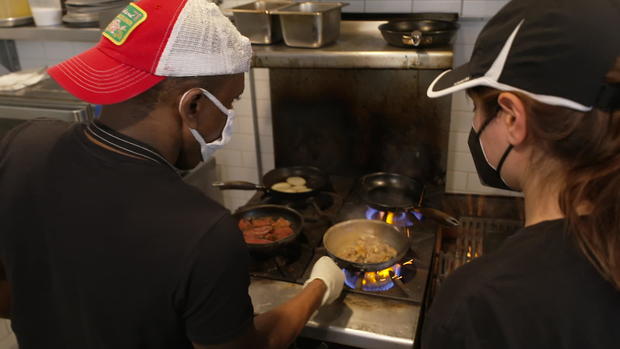