Walmart’s final round of Deals for Days is happening right now. The Black Friday event features slashed prices AirPods and headphones, this season’s hottest toys, Samsung and Apple phones, clothing and more, plus an Xbox Series X and PS5 restock.

But if you don’t feel like clicking around to see what’s on sale, don’t worry. We’ve found the best deals from Walmart’s Black Friday sale and listed them below.

Shop for discounts on Apple Airpods, Roku streamers, Samsung Chromebooks, toys and kitchen gadgets. Plus, there’s a really great deal on the self-emptying Shark robot vacuum for $299 that’s worth checking out below.

Heading to Walmart IRL? The Walmart Black Friday sale will launch in-store on Nov. 26 at 5 a.m. local time. Some sale items are sold online only. Walmart will be closed on Thanksgiving, Nov. 25.

Deals aside, with supply chain issues looming large over the holiday season, you may want to start your shopping now. Some of the hottest toys of 2021 have sold out already, and stores may not have consistent availability of the items you’re shopping for this year, especially if you procrastinate.

You can shop these items from Walmart’s early Black Friday sale right now. They include major deals on tech, clothing, toys and more.

Walmart restocked the PS5 on Nov. 22 and it quickly sold out. That said, we put a “check stock now” button below so you can check and see if you can catch a surprise early PS5 restock today. (PS5 availability is online only.)

The Xbox Series X console is the fastest and most powerful Xbox ever, with 12 teraflops of processing power. The gaming device is backward compatible with thousands of games from all four generations of Xbox consoles.

One of this season’s must-have gifts, Apple AirPods Pro use active noise cancellation technology to block out outside noise so you only hear your favorite music, podcasts and TV shows. Need to hear important announcements or keep an ear on traffic while you have your AirPods in? The Siri-enabled AirPods Pro feature a transparency mode so you can tune in to the world around you. The water- and sweat-resistant AirPod’s silicone tips come in three sizes for a customizable and comfortable fit.

One of the most popular deals at Walmart this Black Friday is still available: You save more than half off when you purchase this Samsung Chromebook during Walmart’s Deals for Days sale. This slim 11.6-inch device features 4 GB of memory, a full-size keyboard and trackpad and voice control with Google Assistant.

The sport-focused Apple watch allows you to track all of your fitness goals. Wear it during workouts to monitor your movement and heart rate or share your daily activity with friends. The Apple Watch Series 3 with GPS is water-resistant up to 50 meters. The device is Wifi and Bluetooth compatible.

Unlike the PS5 and the Xbox series X, the Xbox series S console will likely be available in store Nov. 26 (assuming it doesn’t sell out). The gaming device offers next generation speed and performance with Xbox velocity architecture, powered by a custom SSD and integrated software. It includes backward compatibility, so gamers can play thousands of games from all four generations of Xbox consoles.

This smart TV has the easy-to-use (and easy-to-customize) Roku operating system built in, which provides access to thousands of paid and free TV channels. You many not be familiar with its brand name (Onn), but this 70-inch Roku TV is rated 4.3 stars at Walmart — and you’ll be hard pressed to find another 70″ television with Roku baked in for this price.

The gaming headset is on sale during Walmart’s Black Friday deals event. The headphones feature 40-millimeter speakers inside over-ear premium synthetic leather cushions. The Turtle Beach universal headset includes a mic that can flip up out of the way to mute when not in use.

These 100% Egyptian cotton bath towels are on sale for $5 a piece starting Nov. 22. These luxurious Hotel Style towels come in five different colors and are machine washable.

These Serta So Soft! sheets are made with 100% soft-washed polyester microfiber. The snuggly sheet set comes in four different colors and can be purchased for twin, full, queen and king beds. Set includes a flat sheet, fitted sheet and four pillow cases.

This robot vacuum has home mapping and an automatic suction-power adjustment. It is also compatible with Amazon Alexa or the Google Assistant for hands-free control.

We’ve seen a number of good deals on robot vacuums for Black Friday, but this Shark vacuum is the lowest-priced self-emptying robot vacuum we’ve found this season. It can be controlled via an app or voice control to clean carpets and hard floors. After each cleaning session, the device automatically empties itself into its bagless self-empty base, so you won’t have to empty it time and time again.

The Samsung Galaxy Buds Pro offer eight hours of charge (as compared to five for the Galaxy Buds), an IPX7 waterproof rating and support for Dolby Atmos. Available in three colors, they’re $50 off at Walmart and Samsung right now.

The two-pack of cold weather tights are a special price during Walmart’s Deals for Days. Each set of tights features a tummy control top. Tights run up to a size 3XL.

Here’s an unusually refreshing Black Friday deal: Walmart has a bidet on deep discount during Deals for Days. The Luxe W85 model features a dual-nozzle, non-electric bidet attachment. The bidet has pressure-control knobs for user preference as well as a hygienic nozzle-guard gate for easy maintenance.

The IPX4 sweat- and water-resistant Apple AirPods (3rd generation) come with a number of upgrades over the previous generation: spatial audio that places sound all around you, longer battery life (30 hours total, with included MagSafe charging case), force sensor controls on the stalk and support for Find My Network so they’ll never go missing. You can save a few dollars off the $179 Apple list price by shopping at Walmart.

Fall is the perfect time for a warm cup of coffee — or cup of hot cocoa — so it’s no surprise that Keurig coffee makers are popular around Black Friday. The Keurig K-Duo offers the best of both coffee worlds: the convenience of a coffee pod-based Keurig, and the versatility of a traditional carafe brewer.

Sure, air fryers are all the rage. But did you know you can get a great deal on a traditional fryer as well? This Hamilton Beach model holds up to 8 cups of oil.

This 4-quart air fryer circulates hot air around your food, making it crispy on the outside and perfectly cooked on the inside. And it doesn’t just air fry things: The wide temperature range (105° to 400° F) allows you to reheat and dehydrate food as well.

Lego Classic Bricks on a Roll: $20

If you know a kid who’s into cars, trucks and other modes of transportation, this Lego Classic set will bring them hours of joy.

Still looking for Splash Queen, Pranksta and the other LOL Bling series dolls? This six pack, full of accessory reveals and surprises, can help round out any LOL Surprise collection.

This motorized Nerf blaster fires up to eight balls per second. This model features the fastest automatic Nerf firing system to-date. And there’s no need to stock up on batteries; this blaster has a built-in rechargeable battery.

Thu Nov 25 , 2021
You can save big on top athletic brands this Black Friday, including deals on Nike, Theragun, Athleta, Bowflex and more. Westend6/Getty Images ‘Tis the season to get the best deals on everything fitness related. From big ticket equipment like spin bikes, mirrors and treadmills to less-expensive essentials such as activity […] 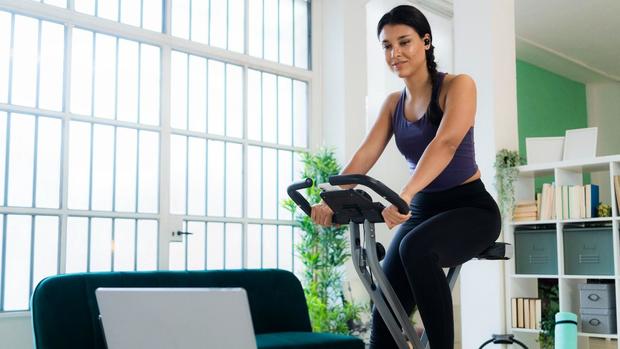