It’s Election Day, which our longtime readers know means it’s time for our just-for-fun awards. Here we recognize some of the campaign ads that made an impression on us — good, bad or otherwise — during the 2020 election cycle.

For example, we were confused by an ad referencing a famously ruthless leader and somehow both over- and underwhelmed by a different ad promoting an ambitious national anthem singer. We also were reminded of an unconventional ad we overlooked in 2010, and a scary TV spot about a break-in was supposed to frighten us.

Read on for more, and don’t forget to vote.

Loeffler, a Republican, ran three different ads claiming she’s “more conservative than Attila the Hun,” whom we don’t recall being a conservative icon.

In the ad above, which got the most press attention, the comparison to the brutal leader of the Hunnic Empire comes after a woman notes that Loeffler “was ranked the most conservative senator in America” — at least based on one metric.

From there, the ad flashes back to an imagined scene from the 5th century where a man writes down the agenda of Attila, who only speaks in grunts. “Fight China,” “attack big government” and “eliminate the liberal scribes,” the scribe, now concerned, translates in turn.

Considering the reference to China, some of the ad’s critics wondered if Loeffler’s campaign actually meant to refer to Genghis Khan, the 13th century leader of the Mongols who conquered China and other parts of Asia. Attila invaded parts of Europe.

But one of Loeffler’s challengers in the special election for the seat to which she was appointed in 2019, Republican Rep. Doug Collins, raised another potential issue. “FYI Attila the Hun was an open-borders globalist who killed Christians and practiced postnatal abortion,” he tweeted.

In 2020, it wouldn’t take much to be considered more conservative than that.

Democrat John Hickenlooper apparently made an ad so memorable 10 years ago that two of his political opponents were inspired to repurpose it this year.

“You gotta ask yourself, ‘Why does John Hickenlooper take so many showers?’” the narrator says in an Andrew Romanoff ad from the Democratic primary for Senate in Colorado. The ad is referring to an ad from the 2010 governor’s race in which Hickenlooper, to show his utter dislike for negative attacks, took shower after shower with his clothes on.

Romanoff used the Hickenlooper ad to make the case that Hickenlooper needed so many showers to “wash out the stain of oil and gas money” or “the convictions for taking illegal gifts.” Romanoff still lost to Hickenlooper by 17 percentage points.

In his quasi-remake, Republican Sen. Cory Gardener, whom Hickenlooper hopes to unseat in the general election, said the ad exposed Hickenlooper’s hypocrisy.

“Hickenlooper said he needed a shower because of negative ads. Now it’s Hickenlooper who’s running nasty ads. He even attacked me for going fishing,” says Gardner, while having his own clothed rinse.

It’s true that Hickenlooper has since broken his pledge not to go dirty, and he did run an ad attacking Gardner for going “on vacation for a month” while the Senate was in recess in August. But our main takeaway from the Romanoff and Gardner ads is that it was criminal for us not to reward Hickenlooper for his ad all those years ago. He clearly deserved it.

It’s no secret, considering the number of memes, that Sen. Mitch McConnell reminds some people of a turtle. So we have a hunch his Democratic challenger’s campaign was channeling Wonderful Pistachios’ “Slow News Day” commercial when it made this animation-only ad depicting the Senate majority leader as his spirit animal at a press conference.

As a cartoon-McConnell stands at a podium, a reporter asks him, “Is it true these Kentucky coal miners with black lung disease traveled 10 hours on a bus to see you, and you only gave them one minute?” That’s a reference to a 2019 meeting that actually lasted two minutes by one account, and, yes, some of the miners weren’t happy about it.

But in the ad, cartoon-McConnell is shown saying his constituents “should feel lucky to see” him for any amount of time because he’s “busy.” After that response, two of the miners question how McConnell, who’s been in office since 1985, got elected. (Those bloodhounds from an off-beat ad McConnell ran in 1984 had a little something to do with it.)

Just so you know, McConnell said it didn’t hurt his feelings when Jon Stewart, the former host of “The Daily Show,” likened him to a “slow-talking tortoise-man” in 2014. That’s because he ultimately defeated his Democratic challenger that year in a 15-point shellacking, McConnell said. We’ll probably have to wait until after this year’s election to find out how he feels about McGrath’s series of ads mocking him.

Bong won three Oscars for “Parasite,” his 2019 film about class struggle. According to the Lincoln Project, an anti-President Trump super PAC, the Kim family from that film may not even compare to Republican Sen. Lindsey Graham of South Carolina.

In this ad, one of the grossest we’ve encountered, the Lincoln Project implies that Graham, who’s seeking a fourth term in office, is a political parasite and Trump is his host.

“Some animals can’t survive unless they take,” the ad’s narrator says. “They don’t establish natural equilibriums. Some animals are parasitic. They drink the lifeblood of their hosts, infect whatever they touch and spread like a virus. They’re often right under our noses, camouflaged, convincing their hosts they’re not harmful at all.” That’s all in reference to Graham, whom the ad shows speaking critically of Trump during the 2016 Republican primary before becoming one of Trump’s biggest supporters after Trump became president.

The ad’s description of infestation would have been bad enough, but it also threw in some pretty sickening visuals to drive its point home. The images of insects feasting on dead animals should be avoided by anyone with a weak stomach. Advertising Analytics says the ad aired on TV more than 500 times, so, unfortunately, some South Carolinians probably got an eyeful before they even knew what hit them.

Much funnier — and 100% less disgusting — was the Lincoln Project online video using footage from the 2002 film “The Ring.” It shows Graham stalking — not infecting — actress Naomi Watts for campaign donations.

The Trump campaign ran a series of ads that gave viewers the false impression that Democrat Joe Biden supports completely defunding police departments. This ad, called “Break In,” seemed designed specifically to scare up a few votes from older Americans.

It shows an elderly woman watching TV when a masked man begins to break into her home. She dials 911 but her call goes to voicemail as the intruder gets in and grabs her. “You won’t be safe in Joe Biden’s America,” an on-screen graphic reads.

Terrifying stuff, but we did wonder why the woman didn’t at least try to hide rather than watch as the burglar pried her door open with a crowbar. Has she never seen a horror movie?

Tinfoil Hat Award for the Wildest Conspiracy Theory
Winner: Price of My Vote

If you found it odd that Trump, in a White House coronavirus task force press briefing, floated the idea of putting disinfectant into the body to kill COVID-19, this TV ad, from a mysterious political group called Price of My Vote, attempts to provide some clarity.

It concludes that Trump — or at least the one speaking that day — is an alien. As Trump is talking, a spaceship appears over the White House and a ray of light teleports him up and away. “Well, that explains everything,” says a man watching the disappearing act on TV.

We can appreciate good science fiction, but even that’s too far out there for us. Back on Earth, the president claimed he was being “sarcastic” after there was backlash to him saying “it’d be interesting to check” if “the disinfectant, where it knocks it out in a minute,” could be used as an “injection inside or almost a cleaning” for the virus.

It wasn’t clear to us that he was joking. Dr. Deborah Birx, who was in the room while Trump spoke, looked confused too — so much so that her reaction went viral.

Not again! We really thought we had long ago talked politicians out of dropping ads using animal feces as symbolism. But, here, viewers got a glimpse of just how unpoopular Texas’ COVID-19 restrictions were with Republican Zimmerman and Ryder the longhorn.

That does stink, but only one person that we know of was jailed for longer than a few hours: a Dallas salon owner who refused to close her shop in defiance of state and local orders to do so. Two other beauticians were arrested for allegedly working out of their homes, though they were reportedly detained only briefly. That must’ve been three people too many for Ryder, who apparently thought the punishments were a load of bull.

Actually, the ad was released over a month after Texas Gov. Greg Abbott had already removed confinement as a penalty for violating any coronavirus-related rules in the state. But we now know how strongly Zimmerman and Ryder felt in the first place.

Not every candidate can afford to pay for well-produced advertisements. This one, from Republican Shelli Landon, is proof. But what this TV ad lacked in quality, it tried to make up for with content — lots of it.

It begins with Landon singing the national anthem as a graphic on screen says, “Shelli Fixed it in Washington” — but doesn’t say what was broken, or if she means D.C. or somewhere else. “She Can DO IT Again!” it claims anyway.

Next, as we hear a woman say “the price of freedom is eternal vigilance,” a floating graphic on screen attributes the quote to Thomas Jefferson — but there’s no evidence he said or wrote it. We also don’t know what it has to do with the clip of a burning World Trade Center.

Landon later declares she ran in the 5th Congressional District primary to “represent you Oklahoma,” while showing an x-ed out photo of Democratic Rep. Alexandria Ocasio-Cortez of New York. That’s after we see an image of Landon holding a gun and promising to protect Second Amendment rights, and before we see an image of a resolution she must support — although it’s really hard to make out what it says.

One of Landon’s paintings makes it in at the end of the ad as well.

The lesson from this: How much money you have matters less than what you do with it. This ad surprisingly does too much and not enough at the same time.

The post The 2020 FactCheck Awards appeared first on FactCheck.org.

Tue Nov 3 , 2020
Longtime GOP pollster and political strategist Frank Luntz told CNBC on Tuesday he will be closely watching the results in North Carolina, Florida and Ohio, describing the trio of states as key bellwethers in determining the election outcome between President Donald Trump and Democratic nominee Joe Biden. “If Donald Trump […] 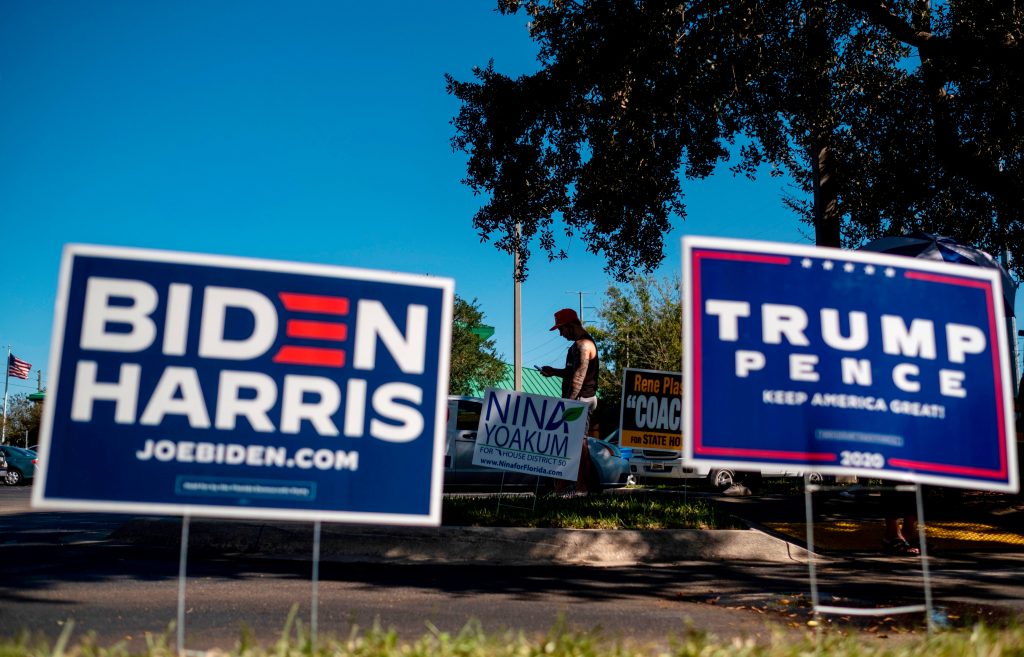