People 65 years and older, and those with certain medical conditions will be able to get the Covid-19 vaccine sooner in Texas than the federal government is recommending.

In Massachusetts, prisoners and corrections officers are in the first phase of vaccine recipients, along with first responders like police officers and fire fighters, even though the federal government recommended including just health-care workers and long-term care residents.

The limited supply of the vaccine doses has forced public officials to ration the shots to a select few groups of people, mostly those in hospitals fighting the pandemic or society’s most vulnerable populations. The Centers for Disease Control and Prevention prioritized health-care workers and nursing home residents in the first phase of Covid-19 inoculations. Most states followed the CDC’s outline for the so-called phase 1a group, but some are deviating a bit from the agency’s advice for the phase 1b group, which the agency outlined Sunday to include everyone over 74 years old as well as “frontline essential workers” like agricultural workers, police and teachers.

That decision was the result of months of discussion and analysis by members of the CDC’s Advisory Committee on Immunization Practices. The group sought to ensure the U.S. divvies out the precious few million first doses in a fair and equitable way that also provided the most benefits to society — like ensuring the people taking care of Covid-19 patients remain healthy enough to continue doing so. But their recommendations aren’t binding, leaving states with the final word on who gets their shot and when.

Texas was among the first states to split from the CDC guidance. The state announced Monday that it is prioritizing those 65 years and older as well as those with certain medical conditions in its phase 1b vaccination plan, making frontline essential workers wait a bit longer.

“The focus on people who are age 65 and older or who have comorbidities will protect the most vulnerable populations,” said Imelda Garcia, chair of Texas’ expert vaccine allocation panel and DSHS associate commissioner for laboratory and infectious disease services. “This approach ensures that Texans at the most severe risk from COVID-19 can be protected across races and ethnicities and regardless of where they work.”

Texas’ deviation from the federal guidelines isn’t unreasonable, Dr. Jen Kates, senior vice president and director of global health and HIV policy at the Kaiser Family Foundation, said in a phone interview. The question of how to prioritize people to receive a potentially life-saving shot is not an easy one, she noted, and there are no right answers. But the state’s deviation is quite substantial, Kates noted, adding that she expects to see even more states break from the CDC recommendation as plans are rolled out.

Florida Gov. Ron DeSantis followed Texas on Tuesday, saying he intends to prioritize people over the age of 70 to be first to get the vaccine, not essential workers.

“The vaccines are going to be targeted where the risk is going to be greatest, and that is in our elderly population,” DeSantis said at a news briefing. “We are not going to put young, healthy workers ahead of our elderly, vulnerable population.”

“It’s not really about right or wrong, but it is about state values,” said Kates, who is closely monitoring state vaccine prioritization plans as they become public.

“Texas has clearly come down on the side of, ‘we’re going to focus on those who are at greatest risk of illness and death,'” she added, noting other states will likely show different values in their plans. “Basically, it creates a different order for the line, and people are going to have different access, relatively speaking, based on where they live.”

Texas’ prioritization plan excludes frontline essential workers from the next tranche of shots, including the state’s nearly 2 million food and agricultural workers, according to the Feeding the Economy trade group. Teachers and school staff, police officers, manufacturing workers, U.S. postal service employees, public transit workers are also among those who are prioritized under the CDC’s phase 1b recommendation, but not in Texas.

“Agricultural workers have little protection and have suffered disproportionately, but in this schema that Texas is using [they] will not be at the front of the line,” Kates noted. “It sends a signal.”

Dr. Bill Schaffner, an epidemiologist at Vanderbilt University and a liaison to ACIP, said that he, too, anticipates seeing more state to split from the CDC guidance in the coming weeks. State officials have been working on their prioritization plans for months, at this point, Schaffner noted, and they’re unlikely to overhaul their plans after the CDC recommendation.

“The ACIP recommendation has been earnest, careful, thoughtful, egalitarian, sincere, honest, all those good things, and a little late in coming,” Schaffner said in a phone interview. “I was pretty sure that in our diverse country with 50 states and I can never remember how many territories, there would be some, shall we say, harmonics — variations on a theme.”

Members of ACIP at their Sunday meeting, when they voted on their phase 1b and 1c recommendations, noted that local officials should take the federal guidance and adjust it based on the local situation. But Schaffner noted that Texas’ plan is more than an interpretation of the federal guidance; it’s a notable deviation.

He also echoed Kates’ point that there’s no right or wrong answer here and that Texas’ plan appears well designed. Not everyone on the CDC’s vaccine committee supported the plan, which was adopted Tuesday. Dr. Henry Bernstein of Northwell Cohen Children’s Medical Center voted against the plan, because he wanted to cover everyone 65 and older in the next round of shots like Texas, Schaffner said.

Implementing the plans is a significant challenge, he said. Of the 4.6 million vaccine doses that have been shipped across the U.S., just 614,117 have been administered through Tuesday morning, according to the CDC. To successfully get the vaccine out to all critical populations will take time and money that local health departments don’t currently have, he said. The recently passed Covid relief bill allocates more than $8 billion for vaccine distribution.

“It’s the implementation where the equity really becomes important. What are the different states going to do to really reach out to the underserved populations?” he said. “If the health department’s haven’t been given additional resources, the intentions may stop at the door.”

And more challenging questions will likely arise as states try to broaden their vaccine allocation programs, Kates, of the Kaiser Family Foundation, said. She noted, for example, that there could be a situation where neighboring states have different prioritization schedules, thereby encouraging some residents to travel across borders to receive the vaccine.

“There’s all those kinds of issues that are going to come up and really, they have to be managed and they can only be managed at a national level,” she said. “Otherwise the inequities will come about.”

Wed Dec 23 , 2020
Dr. Anthony Fauci, the nation’s leading infectious disease official, is joining CBSN for a live interview Wednesday to discuss the latest on the coronavirus pandemic as the nation heads into the Christmas holiday with the number of infections, hospitalizations and deaths hovering in record territory. More than 322,000 Americans have […] 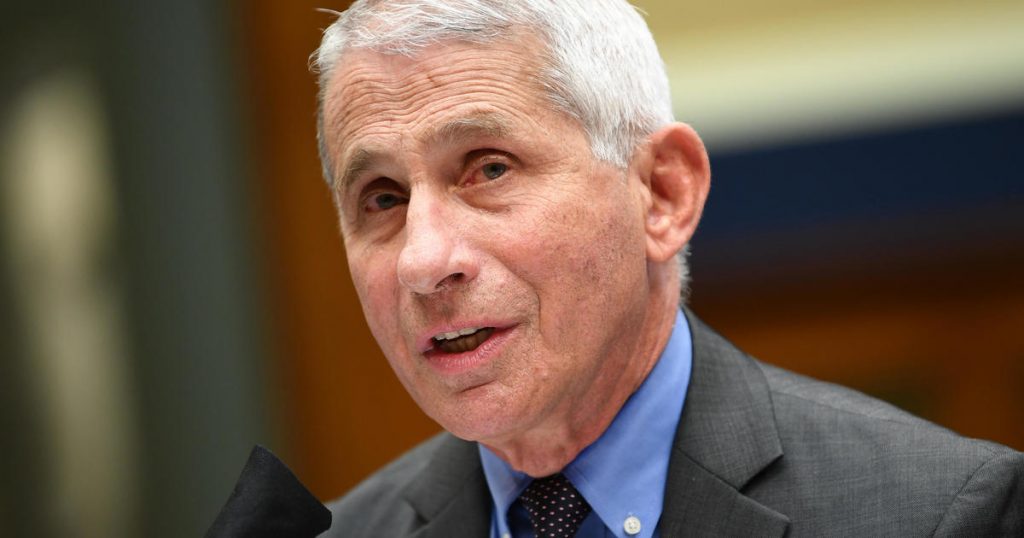