South Australian Premier, Jay Weatherill speaks as he stands next to a plaque during the official launch of the Hornsdale Power Reserve, featuring the world’s largest lithium ion battery made by Tesla, near the South Australian town of Jamestown, in Australia, December 1, 2017. REUTERS/David Gray

By David B Gray

HORNSDALE, Australia (Reuters) – Tesla Inc switched on the world’s biggest lithium ion battery on Friday in time to feed Australia’s shaky power grid for the first day of summer, meeting a promise by Elon Musk to build it in 100 days or give it free.

Tesla won a bid in July to build the 129-megawatt hour battery for South Australia, which expanded in wind power far quicker than the rest of the country, but has suffered a string of blackouts over the past 18 months.

In a politically charged debate, opponents of the state’s renewables push have argued that the battery is a “Hollywood solution” in a country that still relies on fossil fuels, mainly coal, for two-thirds of its electricity.

Supporters, however, say it will help stabilise the grid in a state that now gets more than 40 percent of its electricity from wind energy, but needs help when the wind dies down.

“Storage can respond within a fraction of a second. It can address those stability issues very quickly without needing to resort to using large power plants,” said Praveen Kathpal, vice president of AES Energy Storage, which was a supplier to a losing bidder to build the battery.

Highlighting industry hopes for the take-up of battery storage, Tesla CEO Elon Musk visited the site some 225 kms (141 miles) north of the state capital Adelaide in July, hailing the battery as “just the beginning”.

The state has yet to reveal how much it is paying Tesla.

Weatherill came under fire last year after the entire state went black following a major storm, and raced to shore up the state’s grid with a A$510 million ($385 million) plan, including ordering the big battery and installing diesel-fueled turbines.

AES’s Kathpal, who is also chairman of the U.S. Energy Storage Association, said South Australia’s commitment to turn to energy storage was an important step for the rest of the industry.

“We think that’s what’s really going to acclerate the uptake of energy storage in Australia,” he said.

For security agencies, blockchain goes from suspect to potential solution

Sun Dec 3 , 2017
Adrian Kemp of HoustonKemp Economists speaks to Reuters in their office in Singapore November 24, 2017. Picture taken November 24, 2017. REUTERS/Edgar Su December 3, 2017 By Jeremy Wagstaff and Byron Kaye (Reuters) – Police and security agencies have so far only taken an interest in blockchain – the distributed […] 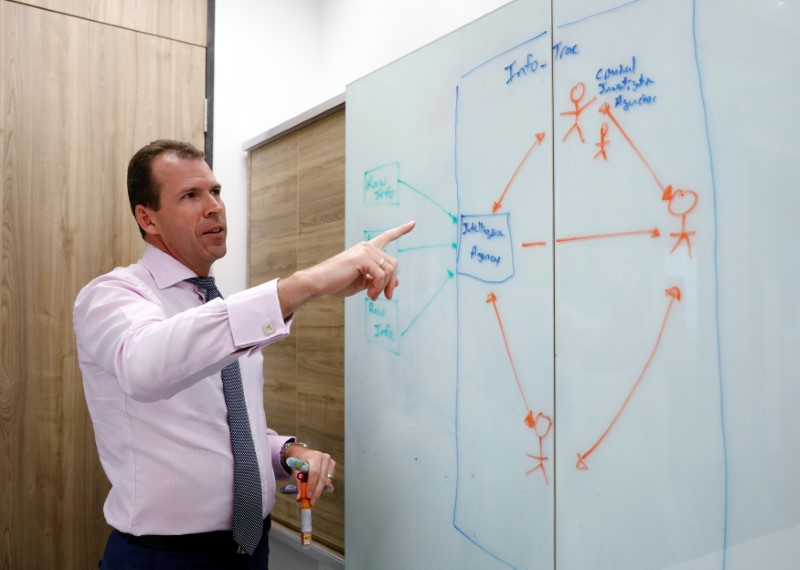