Northeasterners, rejoice: Sunday is the last day of the deep freeze.

Winds are easing somewhat in the Northeast Sunday morning. The actual temperature in many parts of the Northeast and Mid-Atlantic will be near zero degrees. Wind chills in some spots will be 10 to 20 degrees lower than that.

Early Sunday morning, it was 6 degrees in New York City, but the temperature is expected to drop a few more degrees as the morning progresses. The last time New York was above freezing was Christmas Day. Sunday is forecasted to be the 13th straight day below freezing. This will tie for third longest stretch of temperatures below 32 degrees in New York City and will be the longest stretch since January 1961.

Monday in New York City is currently forecasted to be 31 degrees, which would solidify 14 days below freezing, the third longest stretch on record.

Indianapolis has not been above 20 degrees for 12 consecutive days, a new record for the city. This streak will end Sunday when temperatures reach the mid-30’s there.

While polar air will maintain its grip on the East Coast for just one more morning, temperatures are also beginning to rebound in the central U.S. Many wind chill warnings and advisories will end on Sunday. And good news for nocturnal folks on the East Coast: Sunday night will not be nearly as cold as it’s been in recent days.

A pattern change is lurking over the next few days. Milder air is heading for the eastern U.S. Temperatures will be rising 10 to 20 degrees over the next few days. In fact, it will be near 40 degrees in New York City by midweek, and perhaps even higher by the end of the week. Snow on the ground will melt and refreeze at night, so morning ice will be a localized concern.

Heading into the second half of the month, the long-term forecast suggests a January thaw will be coming for much of the country.

As for the West Coast, a storm system is developing in the Pacific and is heading towards California. This storm will carry a good deal of precipitation that arrives Monday and last through Wednesday. The heaviest rain in Southern California is expected to be Monday night into Tuesday.

This a potentially dangerous situation in the recent burn areas of the Thomas, Creek and LaTuna fires. There is a high probability of mud and debris flows Monday night into Tuesday, where locally up to 5 inches of rain will fall.

A flash flood watch has also been issued for Southern California, where heavy rain and thunderstorms are expected. A word of caution for residents of this area: Flash flooding and downed power lines will be possible.

In the higher elevations, heavy mountain snow is likely, with one to two feet expected in the Sierra Nevada. Some snow will also fall on the Southern California Mountains as well. Winter Storm Watches have been posted for that region.

And while Southern California was spared the travel delays that plagued the East Coast last week, now it’s that regions’s turn as the approaching storm causes travel delays.

Heading back east to the Midwest, a weak disturbance system will develop and move through parts of the Midwest on Sunday.

While the precipitation is expected to remain rather light, borderline freezing temperatures Sunday could create slick and icy conditions from eastern Kansas to the Appalachians. A winter weather advisory has been posted for that region.

The precipitation will be snow, stretching an area from northern Illinois to northern Ohio, but only light accumulation is expected.

By Monday, some snow and ice will move into the Northeast and there is potential for some icy conditions in the I-95 corridor, as well. However, all accumulations are expected to remain rather light, so travel issues should remain fairly localized.

Sun Jan 7 , 2018
When President Donald Trump swoops into Atlanta for a VIP seat at college football’s biggest game, he’ll enjoy the Southern hospitality of a city he disparaged a year ago as “falling apart” and “crime infested.” The insults tweeted by Trump a week before his inauguration may seem like ancient history […] 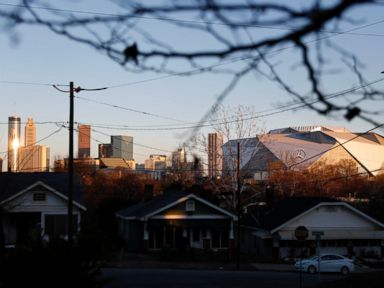