Nine of the 11 major S&P sectors were higher, with only the interest-rate sensitive utilities <.SPLRCU> and real estate <.SPLRCR> indexes in the red. All 30 components of the Dow Jones Industrial Average <.DJI> were higher.

“While today’s bounce suggests a short-term oversold market condition is attracting buyers, one more final push to the downside is on the horizon as a 3-percent 10-year Treasury yield is still not fully discounted,” Peter Cardillo, chief market economist at First Standard Financial in New York, wrote in a note.

The three indexes closed up about 1.5 percent on Friday, but the benchmark S&P still ended the week nearly 9 percent below its all-time high on Jan. 26 as investors fretted that the specter of rising inflation would warrant increasing interest rates at a faster-than-expected pace.

Equities for years have looked relatively attractive compared to the low yields offered by bonds, but the rise in Treasury yields has diminished the allure of stocks, especially with stock valuations at historically expensive levels.

A narrowing spread between bond yields and companies’ earnings yields – currently at 5.4 percent for the S&P 500 index – prompts asset allocation changes between equities and fixed income.

That, along with a reversal of bets on low volatility drew the three major U.S. indexes to correction territory last week, measured by a 10 percent decline from their record highs.

Wall Street’s fear gauge, VIX, short for the CBOE Volatility index <.VIX> was last at 27.63 on Monday, more than double its 50-day moving average but trading in a narrow 2-point range.

President Donald Trump will unveil his second budget later in the afternoon. The plan includes $200 billion for infrastructure spending and more than $23 billion for border security and immigration enforcement.

The infrastructure and tax plans have been the key drivers of the so-called Trump rally – the U.S. market’s relentless rise since Trump’s election in 2016.

The materials <.SPLRCM> and the industrials <.SPLRCI> were both up more than 1 percent. The top S&P sector gainer, however, was energy <.SPNY>, which jumped 1.87 percent as oil prices rose nearly 2 percent. [O/R]

Cisco was up 2.7 percent and American Express <AXP.N> gained 1.5 percent after Instinet upgraded the two Dow components to “buy”.

(Reporting by Sruthi Shankar in Bengaluru; Editing by Savio D’Souza)

Mon Feb 12 , 2018
MIAMI — A Catholic schoolteacher said she was fired for marrying the love of her life – a woman, CBS station WFOR-TV reports. Jocelyn Morffi was a first-grade teacher at Sts. Peter and Paul Catholic School in Miami. She was terminated last week. “This weekend I married the love of […] 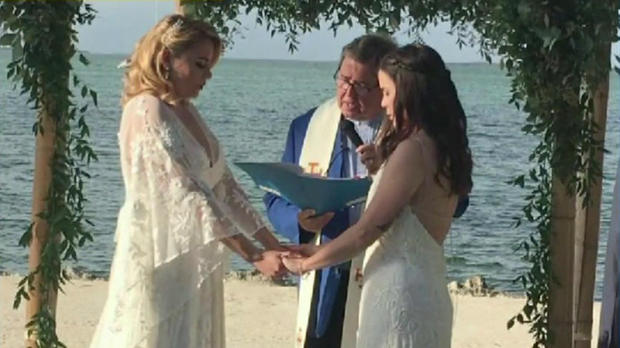