But some of those tax hikes are poised to happen even if Biden’s legislative push isn’t successful. That’s due to the way in which lawmakers structured the 2017 Tax Cuts and Jobs Act.

That law broadly cut taxes for individuals — for example, by lowering the top income-tax rate and exempting more estates from tax. The benefits largely accrued to the top 1%, according to the Tax Foundation.

But the tax provisions for individuals are scheduled to lapse after 2025 and revert to prior law. That means taxes would likely rise for the wealthy absent congressional intervention. (The law’s cut to the corporate tax rate, to 21% from 35%, is permanent.)

“That’ll happen if everything remains as it’s scheduled,” said Paul Auslander, a certified financial planner and director of financial planning at Clearwater, Florida-based ProVise Management Group, of the reversal.

In 2026, the top marginal income-tax rate would jump to 39.6% from the current 37% — one of Biden’s infrastructure-related policy proposals.

Further, estates of single taxpayers that exceed roughly $5.5 million to $6 million would be subject to federal tax — about half the current threshold. A reduction to the alternative minimum tax would expire, as would a new 20% tax deduction for pass-through businesses. A doubling of the child tax credit to $2,000 per kid would also lapse.

The top 1% saw the biggest growth in after-tax income as a result of the Tax Cuts and Jobs Act, according to the Tax Foundation.

Their income increased 3.8%, on average, in 2018, according to the analysis. Those in the bottom fifth saw theirs rise 0.8% that year.

Senate Minority Leader Mitch McConnell, R-Ky., said last week that rolling back any of the 2017 tax cuts to fund Biden’s infrastructure agenda is a “red line.”

Biden’s American Families Plan seek to raise $1.5 trillion over a decade via higher taxes on the top 1%. The revenue would fund initiatives like expanded education, child care and paid leave, which Democrats say factor among U.S. infrastructure.

Two-thirds of taxpayers in the top 1% would see their taxes increase as a result of the Biden proposal, according to the Institute on Taxation and Economic Policy. (This group has an average income of $2.2 million, according to the analysis.)

If it doesn’t succeed, the top 1% will see their after-tax income fall a slight 0.1%, on average, due to the expiration of Tax Cuts and Jobs Act provisions, according to the Tax Foundation.

The rich aren’t the only ones who’d see a tax increase — all income groups would see their after-tax income fall to a similar degree as a result of the expiring provisions.

And not all expiring provisions would necessarily raise taxes on the rich. A $10,000 cap on the state and local tax deduction, for example, would also be repealed, for example.

“Politicians generally want to extend tax cuts,” said Steven Rosenthal, a senior fellow at the Urban-Brookings Tax Policy Center. “It’s hard once you introduce a tax cut temporarily not to extend them permanently.”

The tax uncertainty makes big financial-planning decisions challenging — and individuals shouldn’t make knee-jerk moves due to what they think might happen, according to financial advisors.

That’s especially true with irreversible transactions, like the sale of a business an owner had planned to hold long-term to avoid a potentially higher capital-gains tax, Auslander said.

“It’s a moving target,” Auslander said of taxes. “I wouldn’t make too many long-term bets right now, unless you’re planning to give money away to kids or gift to charities.

“That’s a slam dunk and makes sense no matter what.”

Stocks rebound off worst levels of the session, Dow is down 250 points

Wed May 19 , 2021
U.S. stocks cut sharp losses in afternoon trading on Wednesday as cryptocurrencies prices came off their lows, but the weakness in speculative pockets of the market still weighed on sentiment. The Dow Jones Industrial Average last traded 250 points lower after dropping 586 points at its low of the day. […] 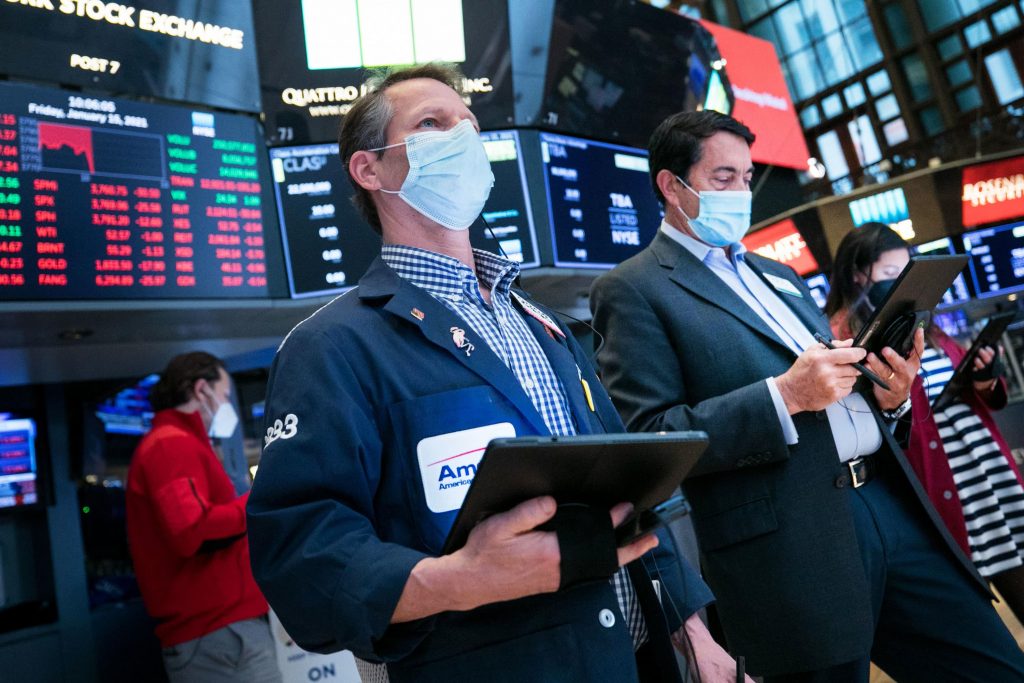