Syrian displaced families, who fled violence after the Turkish offensive against Syria, arrive at a refugee camp in Bardarash on the outskirts of Dohuk, Iraq October 16, 2019. REUTERS/Ari Jalal

BARDARASH CAMP, Iraq (Reuters) – Joumana Akram and her three young children escaped the immediate danger, fleeing their home in northern Syria as the bombardment from Turkish forces began and eventually crossing the border into Iraq.

The husband stayed behind, deciding it was too risky to try to escape with them. The Kurdish YPG militia, the target of Turkey’s onslaught into northern Syria, controls their home city of Qamishli, and might detain him for desertion, Akram explained.

He had fought for seven years with the group, one of many armed militias embroiled in Syria’s eight-year-old war, but left recently to start a new life with his wife and children.

“I’m worried my husband won’t make it out,” Akram, 20, told Reuters in a refugee camp near the Iraqi Kurdish town of Bardarash, her one-year-old daughter Remas cradled in her arms.

The family is among tens of thousands of people in northern Syria who have fled as Turkish forces advance south.

The assault came soon after U.S. President Donald Trump announced his forces were withdrawing from the area, giving Ankara more room to pursue its enemy without the risk of clashing directly with the Americans.

Turkey views the YPG as a terrorist organization linked to Kurdish separatist insurgents at home. It also wants to create a “safe zone” 30 km into Syrian territory where it aims to re-settle millions of Syrian refugees displaced by the war.

But the YPG, which was crucial in helping Washington defeat Islamic State (IS), describes Trump’s move as a callous act of betrayal.

In a fight to survive, it struck a deal with Russian-backed Syrian forces, and they have taken swathes of land close to where the Turks are fighting.

Caught in the middle are people like Akram. Beyond their immediate survival, they must navigate fast-changing frontlines and alliances that resulted from Trump’s sudden move.

“Syria is being destroyed all over again,” she said at the camp where she and hundreds of others are being settled by authorities in the semi-autonomous Kurdistan Region of Iraq (KRI).

“All because Trump sold us out. And the world watched.”

About 1,000 refugees had crossed into Iraq’s Kurdish north since the Turkish operation began, according to the UN Refugee Agency and International Organization for Migration, and more are expected.

Tens of thousands have abandoned their homes across northern Syria, a new humanitarian crisis in a part of the country where a semblance of stability had been established.

Akram paid a smuggler the going rate of $500 to get to Iraq, crossing at an informal border point because Syrian Kurdish forces would not let them leave through their checkpoint.

She and about 300 others have been taken to Bardarash, around three hours’ drive by dusty road from the frontier.

Kurdish authorities have scrambled to erect tents and fix latrines in time for the first refugees arriving on Wednesday.

The camp was originally set up in 2013 to house Iraqis fleeing Islamic State, but was decommissioned in late 2017 after the extremist Islamist movement was defeated in the battlefield.

People arriving at the camp looked exhausted and scared. Some children with tear-stained cheeks wailed as they sat in the coaches transporting them.

One boy, smiling with relief, gave a thumbs up as a convoy of about a dozen coaches swept through the camp gates.

“The bombs are still falling and a lot of people still want to come,” said 25-year-old Masoud Fatah, who arrived in Iraq on Tuesday from his home in Darbasiye.

“They try coming to the border but they’re getting pushed back by the YPG.”

Akram said that YPG fighters tried to stop people leaving the Kurdish-controlled northeast, fearful of what it would do for morale.

The YPG also worry that if large numbers of mostly Sunni Arab Syrians are re-settled from Turkey, ethnic Kurds will soon be outnumbered and lose the freedoms they have fought to secure.

“They (the YPG) threatened us, told us they’d shoot at us, even though they’re our people,” she said in the back of the minibus that had brought her to the camp. “They’re worried that if we all leave, there won’t be any Kurds left.”

Officials from the YPG were not reachable for comment on the accounts given by Akram and some others traveling with her.

Those who spoke to Reuters in Bardarash shared similar stories to Akram’s: as the Turks began shelling their home towns, they crammed into cars and mini-vans with what few possessions they could attach to the roof of the vehicles.

Those who did not have cars walked, some to nearby villages others into dense woods to hide. When the bombardment followed them, they pushed on toward Iraq.

“We couldn’t even tell where the bombs were coming from anymore,” said Hamida Ali. “The children couldn’t sleep, we were so afraid.”

Akram’s hopes of returning to a normal life in Syria are already fading.

“Who wants to leave their home?” she said. “Syria is my home, my land. I want to go back. I want things back the way they were. But I don’t think it’ll ever be the same again.”

Democrats speak after meeting with Trump on Turkey

Wed Oct 16 , 2019
Top Democrats described how a meeting with President Trump and top Republicans on Turkey disintegrated Wednesday, as the president doubles down on his congressionally condemned decision to withdraw troops from northern Syria.  “What we witnessed on the part of the president was a meltdown, sad to say,” House Speaker Nancy […] 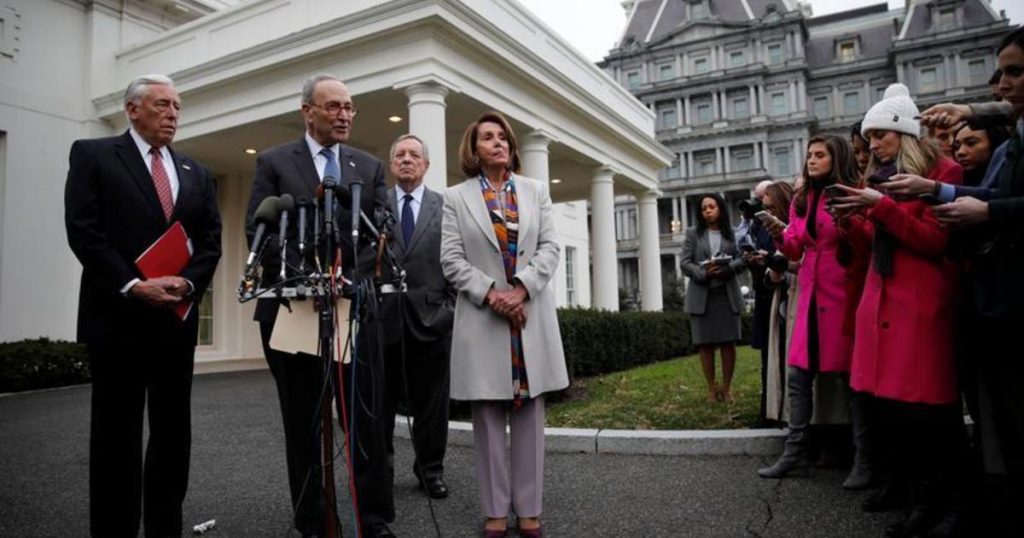