BEIRUT (Reuters) – The Syrian army bombarded jihadists in the last area outside government control near Damascus on Friday, as President Bashar al-Assad accelerated his push to retake remaining enclaves.

On state television, large puffs of smoke could be seen appearing suddenly along a row of buildings as an artillery salvo struck home before one collapsed in a cloud of dust, accompanied by the rattle of automatic fire and the sound of distant blasts.

U.S., British and French air strikes on Saturday to punish Assad for suspected use of chemical weapons have done nothing to slow the advance of his forces, now in their strongest position since the early months of the seven-year-old war.

Air strikes and shelling hit the Yarmouk Palestinian refugee camp and al-Hajar al-Aswad area, part of a small enclave divided between warring jihadists and other rebels south of the capital.

The live state television footage of the area showed a plume of dark smoke billowing across one district as guns boom in the distance. A Reuters witness in central Damascus saw air strikes also hitting the area.

Assad is accelerating his campaign to retake the remaining enclaves his forces encircle around Syria, which would leave rebels with only their two major strongholds in the northwest and southwest.

Western countries launched their first coordinated action against Assad on Saturday to punish him for a suspected gas attack they say killed scores of people during an advance that captured the town of Ghouta near the capital.

But the single volley of air strikes, hitting three targets far from any frontline, had no effect on the wider war which has killed 500,000 people and made more than half of Syrians homeless.

International inspectors from the Organisation for the Prohibition of Chemical Weapons (OPCW) who arrived in Damascus nearly a week ago were still waiting early on Friday to visit the site of the suspected poison gas attack.

Syria and its ally Russia deny using chemical weapons in the assault on Douma. The Western countries say the Syrian government, which now controls the town, is keeping the inspectors out and may be tampering with evidence, both accusations Damascus and Moscow deny.

Physicians for Human Rights, a U.S.-based rights group, voiced “grave concern” over reports that Douma hospital staff had faced “extreme intimidation” after the area came back under government control to stop them talking about the incident.

Rebels on Thursday began pulling out of Dumayr, an enclave northeast of Damascus, under a surrender deal with the government. Insurgents in another enclave nearby – Eastern Qalamoun – said they had also agreed to withdraw.

Thousands of civilians, including the fighters’ families, are expected to leave with them for northern Syria before the areas come back under Assad’s rule under deals similar to others carried out across the country as government forces advance.

The United Nations has voiced concern that such “evacuations” involve the displacement of civilians under threat of reprisals or forced conscription. The government denies that.

“The U.N. expects further displacements in the near future to northern Syria from other locations controlled by non-state armed groups where negotiations reportedly are happening,” the world body said in a humanitarian note.

Conditions in the opposition-held pocket of northern Syria where the displaced will go are poor.

After the army’s recovery of eastern Ghouta this month in a ferocious battle that began in February, the surrender of Dumayr and Qalamoun would leave only the pocket in south Damascus outside government control in the area around the capital.

Yarmouk was the biggest camp for Palestinian refugees in Syria before the war. Although most residents have fled, up to 12,000 remain there and in the neighboring areas under jihadist or rebel control, said the U.N. agency that helps them.

Fri Apr 20 , 2018
TOKYO — A volcano in southern Japan has erupted for the first time in 250 years, and authorities set up a no-go zone around the mountain. Mount Io spewed smoke and ash high into the sky Thursday in its first eruption since 1768. Japan’s Meteorological Agency on Friday expanded a […] 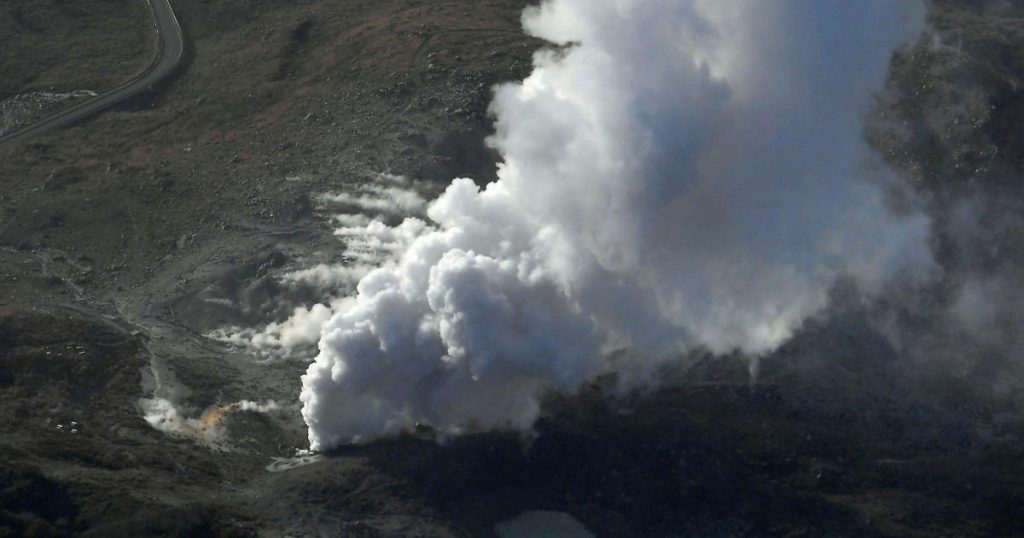