OSLO (Reuters) – Oil firms and labour officials said they will meet with a state-appointed mediator on Friday in an attempt both sides hope will bring an end to a strike that threatens to cut Norway’s oil and gas output by some 25%.

Although informal talks have been taking place, the state mediator has not met with the two sides since the strike over pay and conditions was announced on Sept. 30.

A total of 966,000 barrels of oil equivalent per day is expected to go offline due to the strike by Oct. 14, triple the level so far, unless a deal can be reached to end the strike.

“I really hope we can have the deal tomorrow. We were very close to reaching it today,” Audun Ingvartsen, leader of Norway’s Lederne union, told Reuters on Thursday.

The Norwegian Oil and Gas Association (NOG) confirmed that the mediation is scheduled to resume on Friday at 0800 GMT.

“We will not comment (about) anything from the talks, but we hope we can find a solution,” a spokesman for the NOG said.

The strike has helped benchmark Brent crude rise <LCOc1> above $43 a barrel this week and the prospect of more shutdowns was one of the factors behind a 3.1% jump on oil prices on Thursday, as well as higher gas prices.

If the escalation of the strike goes ahead, crude oil and natural gas liquids will account for about 70% of the planned cuts with natural gas making up almost 30%, a Reuters calculation based on Norwegian output data showed.

The union wants to match the pay and conditions of workers at onshore remote control rooms with offshore workers, as well as higher wage rises this year than proposed by oil companies.

Norway’s government, which can intervene if a strike is considered a national emergency, said in a statement that it was up to the two sides to resolve their differences and it was monitoring the situation.

In 2012, Norway invoked its powers to end an oil industry conflict after 16 days when employers threatened a lockout of workers that would have shut down its entire oil and gas output.

Six offshore oil and gas fields shut on Oct. 5 as Lederne ramped up the strike, cutting output capacity by 8%, or about 330,000 barrels of oil equivalent per day (boepd), NOG said.

Another seven could fully or partly shut, including one of ConocoPhillips’ Ekofisk platforms and Wintershall Dea’s Maria oilfield, it added.

The biggest outage would be at Equinor’s <EQNR.OL> Johan Sverdrup oilfield, the North Sea’s largest with an output capacity of up to 470,000 barrels per day, which is set to shut on Oct. 14, Equinor said on Wednesday.

The strike is cutting Norwegian gas exports by 35 million cubic metres per day, Refinitiv analysts said in a note.

“The addition of four more fields (Oseberg South, Oseberg East, Ekofisk and Kristin) to industrial action could increase that impact to around 42mcm/d when looking at the recent output of said fields,” they said.

The strike would also hit the fourth-quarter earnings of oil companies, with Equinor, Aker BP <AKERBP.OL> and Lundin Energy <LUNE.ST> likely to see reduced income per share of 4%-6% in the event of a 10-day strike, brokerage Sparebank 1 Markets said.

Thu Oct 8 , 2020
A woman try to remove a tree of the road who was fallen due to the fact that Hurricane Delta, reach category 3 on the Saffir-Simpson scale, reached the coast of Quintana Roo, which caused flooding, fallen trees and several houses affected, it is estimated that Hurricane Delta will continue […] 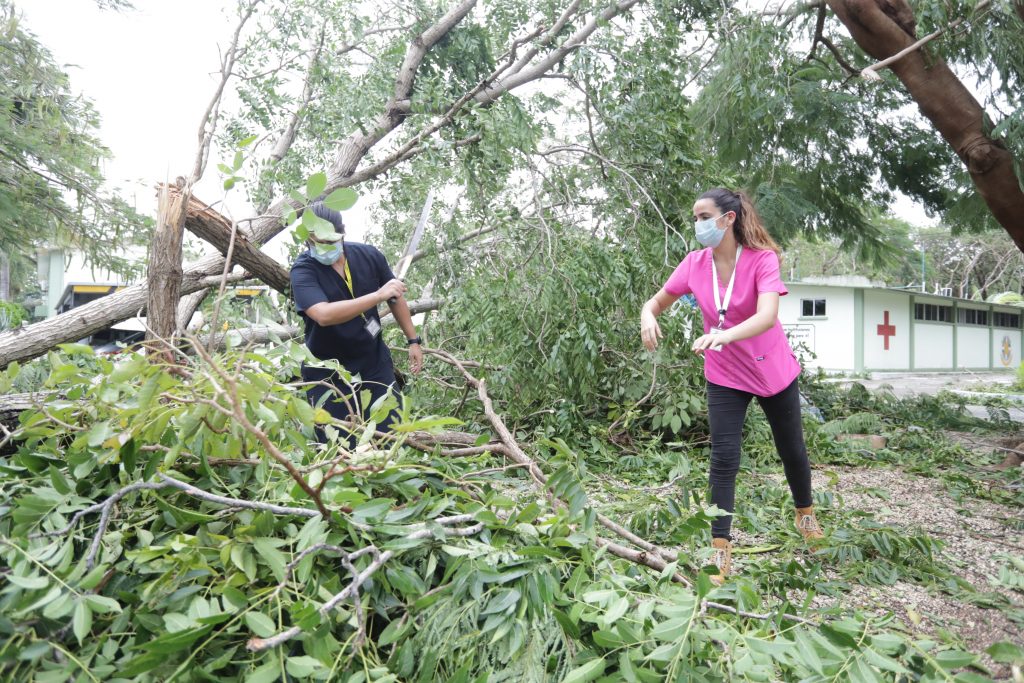