Stocks rose on Friday to wrap up another strong week as the Dow Jones Industrial Average tried to erase its losses of 2020.

Walmart and Microsoft led the way for the Dow, rising more than 1% each. Tech was the best-performing sector in the S&P 500, rising 0.6%.

Friday’s gains put the Dow on track to close in positive territory for the year. The last time the Dow sported a year-to-date gain was in late February, when it traded around an all-time high. Entering Friday’s session, the Dow was just 3.6% below its record.

“For now, stocks seem to be enjoying the best of both worlds as they are seeing signs of improving economic momentum while monetary stimulus continues to be very accommodative – and more fiscal stimulus is likely on the way,” Yousef Abbasi, global market strategist at StoneX, said in a note.

For the week, the major averages entered the session up at least 2%. Both the S&P 500 and Nasdaq were on pace to post five-week winning streaks. The Dow, meanwhile, was headed for its third weekly gain in four weeks.

Stocks got a boost Thursday amid volatile trading after the Federal Reserve unveiled a major policy shift, allowing inflation and employment to run higher to continue to support the economy.

The move indicates that interest rates are likely to stay near zero for a long period of time. The central bank previously hiked rates pre-emptively to head off higher levels of inflation.

“The announcement of a move towards an asymmetric unemployment approach is very important and a welcome development,” Greg Daco, chief U.S. economist at Oxford Economics, said in a note. “The Fed will be in no hurry to raise rates. If and when the unemployment rate falls, the Fed will strive to ensure that the benefits from looser policy are as inclusive as possible.”

On the data front, U.S. consumer spending rose 1.9% in July, topping a Reuters forecast of a 1.5% gain. Personal income was also stronger than expected, rising 0.4% while economists had forecast a drop of 0.2%.

U.S. tech stocks are now worth more than the entire European stock market

Fri Aug 28 , 2020
A sign thanking healthcare workers is displayed on the Nasdaq MarketSite in the Times Square neighborhood of New York, U.S., on Monday, April 6, 2020. Jeenah Moon | Bloomberg | Getty Images The dominance of major U.S. tech stocks in recent years has pushed the sector past another milestone as […] 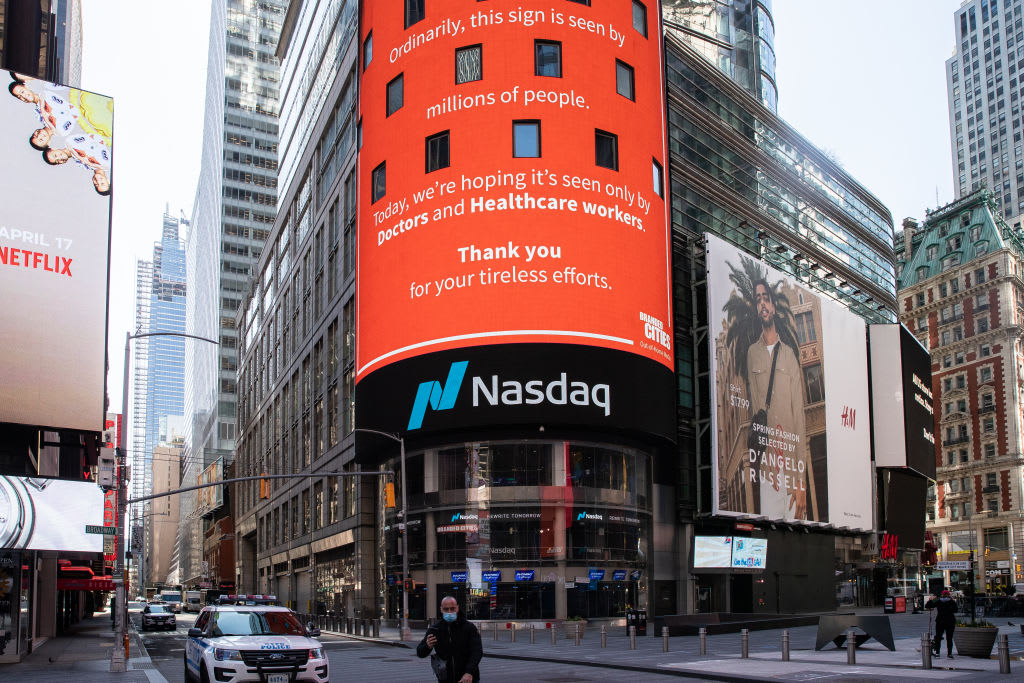