U.S. stock futures traded modestly lower on Tuesday evening as investors await the outcome of the election that will determine who controls the U.S. Senate.

Sen. Kelly Loeffler, and David Perdue released a statement saying they are “encouraged” by high voter turnout in Georgia, ahead of the evening runoffs.

As for U.S. equities, which continue to hover near record highs, keeping the Senate in control of the GOP is a good scenario, according to Ed Mills, Managing Director Washington Policy.

“The markets really like the idea of a divided government,” Mills told FOX Business.

If the Democrats were to sweep the election, some are more pessimistic, including Oppenheimer chief investment strategist John Stoltzfus.

“A Democratic sweep of the two runoff elections in Georgia could cause the U.S. broad equity market to experience a downdraft of anywhere between 6% and 10%,” Stolzfus wrote.

Some, including Grover Norquist of Americans for Tax Reform, warn a Democrat win would result in big take hikes for Americans.

“Dead center, a median-income family of four will see a $2,000 tax increase if the Democrats win those two seats in Georgia and Biden is able to repeal the Trump tax cuts,” he said.

As for the corporate tax rate, which Trump chopped to 21% from 35%, it may also get ratcheted higher to 28%.

Stocks rallied Tuesday, in part due to rising oil prices, which topped the $50 per barrel for the first time since February, and as investors continued to adjust positions for the new year and incoming President-elect Joe Biden.

Tue Jan 5 , 2021
U.S. President Donald Trump listens to Microsoft President Brad Smith, left, speak during a roundtable discussion with industry executives on reopening the country, in the State Dining Room of the White House in Washington on May 29, 2020. Mandel Ngan | AFP | Getty Images A handful of Microsoft employees […] 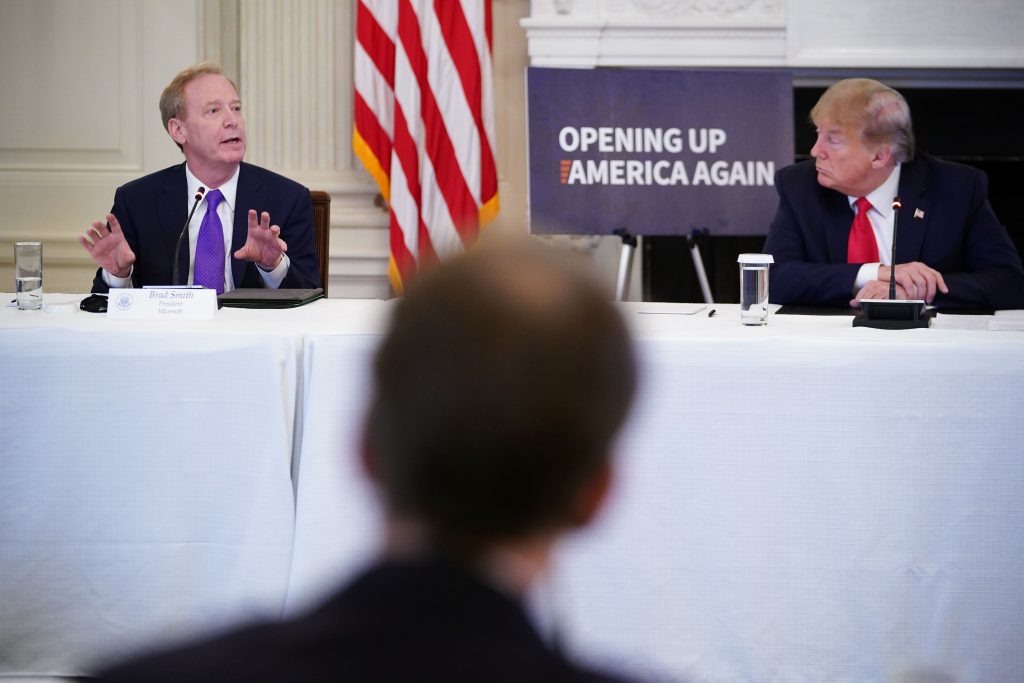