U.S. stock futures were mixed Wednesday morning as investors sifted through numerous earnings reports ahead of a Senate vote on infrastructure.

Dow Jones Industrial Average futures climbed 121 points, or 0.35%, while S&P 500 futures rose 0.24% and Nasdaq 100 futures slipped 0.1%. The choppy trade comes a day after the major averages recouped most of the previous session’s losses, which included the worst day for the Dow since October.

Senate Majority Leader Chuck Schumer of New York said a procedural vote on a $1 trillion infrastructure package will proceed Wednesday despite the bill not being fully written. Republicans have said they cannot support a bill where the final text is unknown.

In stocks, Netflix Inc. reported quarterly profit and subscriber growth that fell short of Wall Street estimates. The streaming giant confirmed plans to move into gaming, saying games would be included in subscriptions at no additional cost.

Elsewhere, Chipotle Mexican Grill Inc. posted quarterly results that were ahead of expectations as digital sales grew 10.5% and made up 48.5% of all revenue.

Coca-Cola Co. beat on both the top and bottom lines and raised its full-year sales forecast as the reopening of restaurants, stadiums and theaters spurred a rebound in demand.

Meanwhile, Johnson & Johnson’s profit and revenue exceeded analyst estimates and the drugmaker said it expects to sell $2.5 billion of its COVID-19 vaccine this year.

Harley-Davidson Inc. earnings and sales topped expectations as motorcycle sales surged 131% from a year ago.

Wed Jul 21 , 2021
A police vehicle is seen on a makeshift bridge made by members of the Bundeswehr, near the destroyed bridge, following heavy rainfalls along the nearby Ahr river, in Insul, Rhineland-Palatinate state, Germany, July 21, 2021. REUTERS/Christian Mang July 21, 2021 BERLIN (Reuters) – Insured losses from floods in western Germany […] 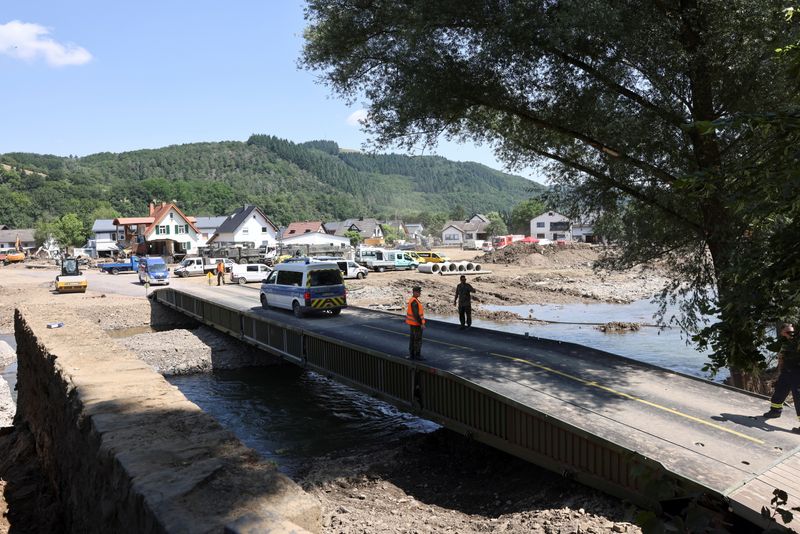