Stock futures jumped in volatile trading Tuesday night as results of the presidential election rolled in. Futures for the Nasdaq-100 index, home to many tech stocks, jumped the most.

Other markets were making significant moves:

Futures gyrated as polls closed and states began to be called. They then gained, led by Nasdaq futures, as the evening went on.

“It’s still early and stock futures are likely to stay volatile throughout the night, but right now the market feels ready to price a better outcome than anticipated – that a runaway wide margin Biden win is off the table,” said David Bahnsen, chief investment officer of The Bahnsen Group.

So far, President Donald Trump will win the presidential vote in Indiana and Kentucky along with South Dakota and Arkansas, NBC News projects. Trump is also projected to win Alabama and North Dakota. Former Vice President Joe Biden is projected to win Vermont, Delaware, Maryland and Massachusetts as well as Colorado and New York, according to NBC News.

Florida was too close to call and Pennsylvania was too early to call along with North Carolina and Ohio, NBC News said.

During Tuesday’s regular trading, the Dow popped more than 500 points, or 2.1%. The S&P 500 gained 1.8%, and the Nasdaq Composite advanced 1.9%. Those gains added to Monday’s strong performance.

Biden was ahead of Trump in the polls leading up to Tuesday. Wall Street is also watching some key Senate races.

Wed Nov 4 , 2020
Sarah McBride has declared victory in a Delaware state senate race, making history as the nation’s first transgender state senator. The Democratic candidate defeated Republican Steve Washington.  “We did it. We won the general election. Thank you, thank you, thank you,” McBride tweeted on Tuesday night.  McBride launched her campaign […] 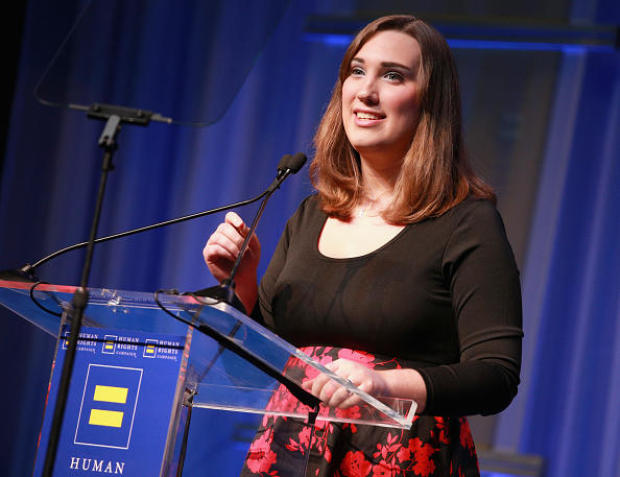