“Disaster” is one word being used to describe the potential fallout for the retail sector from on-again, off-again economic stimulus talks in Washington, D.C.

“It is not an overstatement to say that pushing out any stimulus package until after the election is a disaster and may cause a shoe retail collapse again, both in terms of crashing sales and retail job losses at shoe stores going into the holiday season,” he said.

In a tweet Tuesday afternoon, President Donald Trump cast doubt about the timing of economic stimulus payments to consumers. He said the White House was halting talks with Democrats, and the news turned major stock averages sharply lower. But stocks were rising again by Wednesday morning, after Trump seemingly changed course, tweeting support for aid to airlines and other stimulus measures, stoking hopes that a smaller aid package could be passed by lawmakers.

“Many consumers are relying on some level of stimulus, some level of support, this holiday season,” said David Bassuk, global co-leader of the retail practice at AlixPartners. “Holiday is starting now. This is the time retailers need consumers to feel confidence.”

The retail industry’s leading trade group, the National Retail Federation, is among those pushing for additional stimulus to fuel business.

“The pandemic isn’t over and neither is the economic crisis it has created,” NRF President and CEO Matt Shay said in a statement.

Indeed, more than 7.5 million Americans have been diagnosed with Covid-19 since the pandemic began, according to data from Johns Hopkins University. On average, over the past seven days, the number of new U.S. cases is growing by nearly 44,000 each day, based on a CNBC analysis of Johns Hopkins’ data.

Meanwhile, the unemployment rate in September was at 7.9%.

“There are many families still struggling to make ends meet and businesses facing obstacles to putting workers back on the payroll,” Shay said. “We need a vaccine to ensure our personal health. And we need further stimulus to ensure we can fix an ailing economy, bring people back to work and spur growth in communities large and small.”

The Business Roundtable, a group made up of CEOs from some of the country’s largest corporations that is chaired by Walmart CEO Doug McMillon, has also called on the president and on Congress to get back to work on relief legislation.

The group said “failure to reach a deal on additional relief would worsen and prolong the crisis for our country.”

Major retailers, including Apple, Best Buy and Home Depot, have already seen how government stimulus can benefit their bottom line. In the spring, they said they got a bounce in sales as Americans rushed to their stores and websites to spend extra money in their pockets. Some opted for discretionary items they’d previously skipped over, such as TVs and apparel, the companies said.

The U.S. government issued millions of checks as part of a historic $2 trillion relief package Congress passed in March to try to rev up consumer spending again to spark economic recovery. Eligible adults received checks of up to $1,200, depending on income level. (Individuals making more than $99,000 a year, or joint filers making $198,000, didn’t get a check at all.)

Walmart said in August that its stimulus bump faded as shoppers spent that money. Chief Financial Officer Brett Biggs said spending tapered off in July, and he declined to provide a financial outlook for the year, citing stimulus as a factor.

“Stimulus was definitely impactful to the consumer in the second quarter, and we’re watching what’s going on in Washington, and how we’re going to progress with a new stimulus package,” Biggs said in an interview with CNBC in August. “I think certainly it would be helpful for consumers.”

Target CEO Brian Cornell said in August that he’d also like Congress to press forward with another stimulus package to create more certainty for consumers and businesses. Yet he credited most of the big-box retailer’s strong sales last quarter to a shift in consumer spending, as families canceled summer vacations and couldn’t go out to dinner or to the movies, rather than the government-issued checks.

A breakdown of stimulus talks brings more chaos to an already chaotic holiday season pressured by a global health crisis and the distraction of a presidential election.

Americans are coping with uncertainty as the holidays approach and they try to figure out how to safely celebrate, said Ashwani Monga, a Rutgers University-Newark marketing professor who studies consumer psychology. With no relief in sight from stimulus, cash-strapped consumers, in particular, won’t feel comfortable going on a spending spree.

“The worst part of this pandemic is we don’t know if it’s three more months,” he said. “Is it 12 more months? Will it ever get over? Will we be wearing masks forever? No one knows. For the low-income consumer, you’re even more focused on saving for these rainy days than a high-income consumer who has enough buffer to go through these times.”

He said whether Congress approves additional stimulus will have “tremendous implications for the economy overall,” since families tight on funds tend to immediately spend that money.

“You give them the money this week, and you’ll see people spend more this week,” he said.

And it’s not just about retailers’ bottom lines. The industry is the nation’s largest private-sector employer, contributing $3.9 trillion to annual GDP and supporting 1 in 4 U.S. jobs, according to NRF. Weak sales could translate into greater job losses down the line.

Retailers have been pushing discounts and holiday marketing earlier than ever this year to try to grab market share during the pandemic and avoid last-minute bottlenecks in their supply chains. But consumers may end up waiting to shop closer to the holidays anyway because of the stimulus uncertainty, said Katie Thomas, who leads the Kearney Consumer Institute, a consumer think tank at the consulting firm Kearney.

Whether stimulus checks are issued will also impact how price sensitive consumers become.

“The price gap always matters,” Walmart’s Biggs said at the Barclays conference on Sept. 8. “If we don’t get another stimulus package, which all of us are monitoring like you are, price probably matters even more.”

The lack of a deal could also put further pressure on the number of shoppers heading out to stores. That figure is already expected to drop as much as 25% year over year during the holidays.

“Retailers and retail centers are already facing the prospect of diminished foot traffic due to the pandemic as we near the important holiday shopping season,” said Ryan Severino, a chief economist for JLL. “Online sales will help but are no panacea if consumers are not being supported.”

Wed Oct 7 , 2020
U.S. stocks rose sharply on Wednesday after President Donald Trump tweeted support for aid to airlines and other stimulus measures, stoking hope that a smaller aid package could be passed by lawmakers.  The Dow Jones Industrial Average closed 530.70 points higher, or 1.9%, at 28,303.46. It was the Dow’s biggest […] 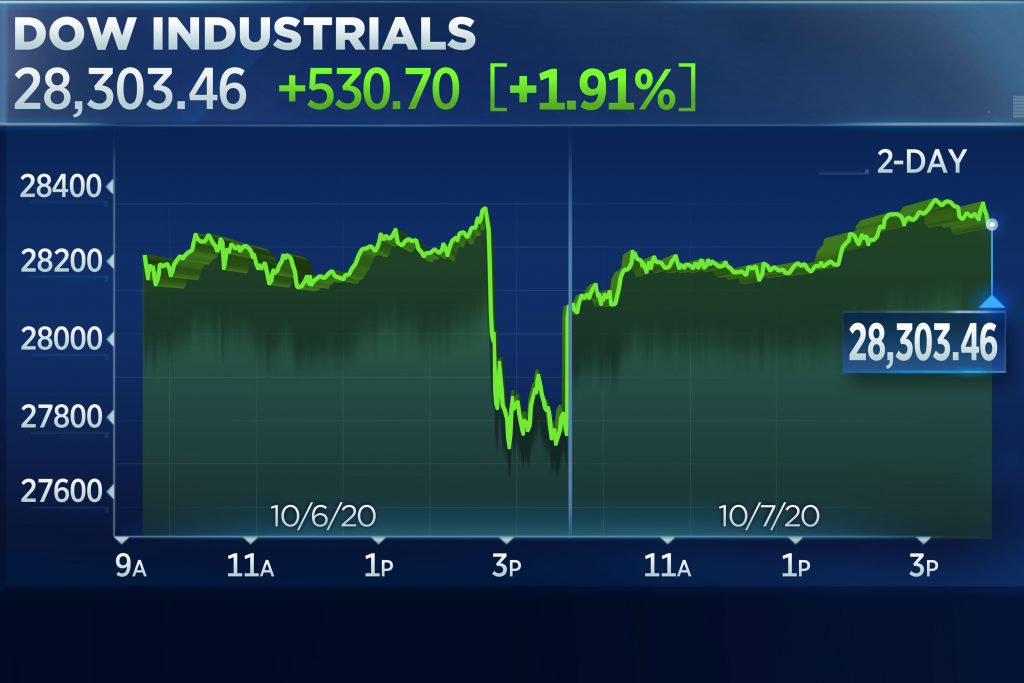