Six months after it was announced, the tech that Apple and Google built for sending Covid-19 exposure alerts to smartphones is finally gaining momentum in the United States.

New York and New Jersey both released Covid-19 alert apps this week, bringing the total to 10 states plus Guam which have published apps using technology from the Apple-Google partnership. 70 million people, or 21% of the U.S. population, now has access to a Covid-19 app, according to a CNBC analysis using U.S. Census data.

More are coming soon, too. Five other states plus Washington D.C. have announced plans to use the Apple-Google exposure notification system, and California and Arizona are currently testing apps in pilot programs.

If the system works properly, the apps will provide push alerts to any user who came in close contact to another app user who tested positive for the coronavirus. Users can also use the apps to alert everyone they were nearby that they tested positive without revealing their name or phone number.

For health bodies and governments, the apps could help slow the spread of the coronavirus by identifying people who might test positive that could be missed by other methods, such as contact tracing.

“It will not only help us do contact tracing but can also get people a sense of security and confidence,” New York governor Andrew Cuomo said on Thursday in a press conference announcing the app. “You know anxiety is very high, everybody is wondering, I was next to this person, I was next to this person, but this can actually give you some data and facts can help reduce anxiety and that is a good thing.”

While Apple and Google created programming tools called APIs that enabled these apps to run on most recent iPhones and Android phones, the tech giants are not publishing nor developing the apps themselves. That falls to governments and public health bodies, which have historically had limited funding to invest in new technology.

But the costs for developing these apps have finally come down, which is one reason why momentum is picking up.

Development on New York’s app, Covid Alert NY, started in August, and it cost $700,000, a relatively low price that was able to be covered by federal funds and nonprofit groups including Bloomberg Philanthropy.

When Germany’s Covid-19 app was released in June, the government said it cost 20 million euros to develop. Officials from England’s NHS said in September that the total cost of its app was expected to top £35 million.

But American governments can take advantage of apps built in countries like Ireland and Canada because the code for those apps is available online and free to use and has already been deployed to millions of people. Instead of building the apps from scratch merely have to customize an open-source app with specific local health information, graphics, and languages, and don’t have to re-invent complicated code for measuring Bluetooth signals or write privacy policies and other legal notices from scratch.

New York and New Jersey’s apps are based on Covid Green, Ireland’s app, which the government open-sourced in July. The apps for the two states and Pennsylvania were built by NearForm, the original developer of Ireland’s app.

“What that does is gives people like in New York the confidence to go, ‘Hey, this solution has been out there one of the longest, it’s tried and tested, it’s getting adoption levels, citizens seem to like it,” said Larry Breem, chief commercial officer at NearForm. “You’re not trying things for the first time. So people have typically gone before you on the fundamentals.”

Another factor aiding momentum is the fact that U.S. apps are now finally able to talk to each other.

The U.S. does not have a national app strategy, unlike other countries, so the development of the apps falls to the state level.

One concern with early apps was that they would not be able to communicate with other exposure notification apps — so, for instance, if someone with a Virginia app tested positive for Covid-19 and was close to someone with the North Carolina app, the system wouldn’t be able to ascertain the connection, and the person with the North Carolina app wouldn’t get a notification.

But the apps from New York, New Jersey, Delaware and Pennsylvania will all be able to exchange notifications, Cuomo said this week. Connecticut will also be supported when it’s released.

This is possible because the Association for Public Health Laboratories set up a national key server in July, which gives the states the ability to all participate in a single system with different apps, instead of each state maintaining its own back-end.

“This is really the key to interoperability in the United States at this point, because what that means is that anybody who reports themselves as positive, rather than uploading that set of keys to their own state, they’re uploading it to the national key server,” said Jenny Wanger, head of the Implementer’s Forum at the Linux Foundation Public Health, a nonprofit that hosts the Covid Green code and provides assistance to agencies working on exposure notifications.

Will people install them?

Now the apps face the biggest challenge yet: getting people to download and install them.

Ireland’s app, which New York and New Jersey are based on, has an active user base of 1.3 million, or about 35% of the adult population. Virginia’s app was the first to be released in the United States, and it was downloaded 460,000 times in its first month, amounting to 11% of the state’s population with a smartphone, Governor Ralph Northam said in September.

Some users may be repelled by privacy considerations, even though Apple and Google designed the system with privacy in mind.

Apps created with the technology don’t collect or store any personal information like the user’s phone number or location.

Instead, every phone with a Covid alert app sends out Bluetooth Low Energy signals to detect if two people were close together for an extended period of time. Every day, each phone in the system downloads a list of anonymous tokens corresponding to positive tests, and compares them with tokens on the phone collected when the user was near another person for a certain period of time. For instance, New York’s app marks an exposure when two people were within six feet for 10 minutes.

But those privacy provisions won’t matter if people don’t know about or believe in them.

The system is technical and difficult to explain briefly. Some people have advanced conspiracy theories about the software on social media based on the system’s settings inside iPhone or Android software. Users who test positive also must enter a six-digit code to alert others, and governments can’t force them to do so.

“If you don’t have a really strong user awareness and public trust rollout strategy to go with it, your app is not going to see great success,” Wanger said.

States like Virginia have dealt with these problems by emphasizing the system’s privacy in marketing and in-app explanations. New York’s app in places replaces the accepted jargon for the system — “exposure notification” — in favor of the more understandable “closeness sensing.”

There’s also considerable debate about the number of people in any given region that need to download the apps for the system to work.

A study earlier this year that suggested that number is 60%, but Apple and Google representatives as well as people working on the apps say the study was misinterpreted. The authors of the original study presented research in September that an installation rate as low as 15% could help suppress Covid-19 if governments are also using traditional contact tracing. Under traditional systems, government health agencies phone everyone who tests positive and ask them to list people they were recently in contact with, then communicate directly with those contacts to tell them they might have been exposed.

Efficacy data on the apps is still being studied, and many regions have yet to publish stats about detected exposures, Wanger said. Still, places where the apps have been available are seeing them pick up potential cases. In Ireland, 1,382 users of the CovidGreen app who have tested positive have input the code to alert close contacts, and 2,924 users have received alerts who might not otherwise have been identified, NearForm said.

Where the apps are being used

The current list of states or regions with Covid-19 alert apps is below.

States or districts that have publicly announced plans to release an exposure notification app:

States currently testing the app with a limited population in pilot trials:

Sat Oct 3 , 2020
A senior signing up for Medicare. Justin Sullivan | Getty Images Open enrollment season for Medicare enrollees can sometimes be overwhelming because of the wide variety of choices. The average senior will have 47 different health plans to choose from for 2021, according to the Trump administration, up 20% from […] 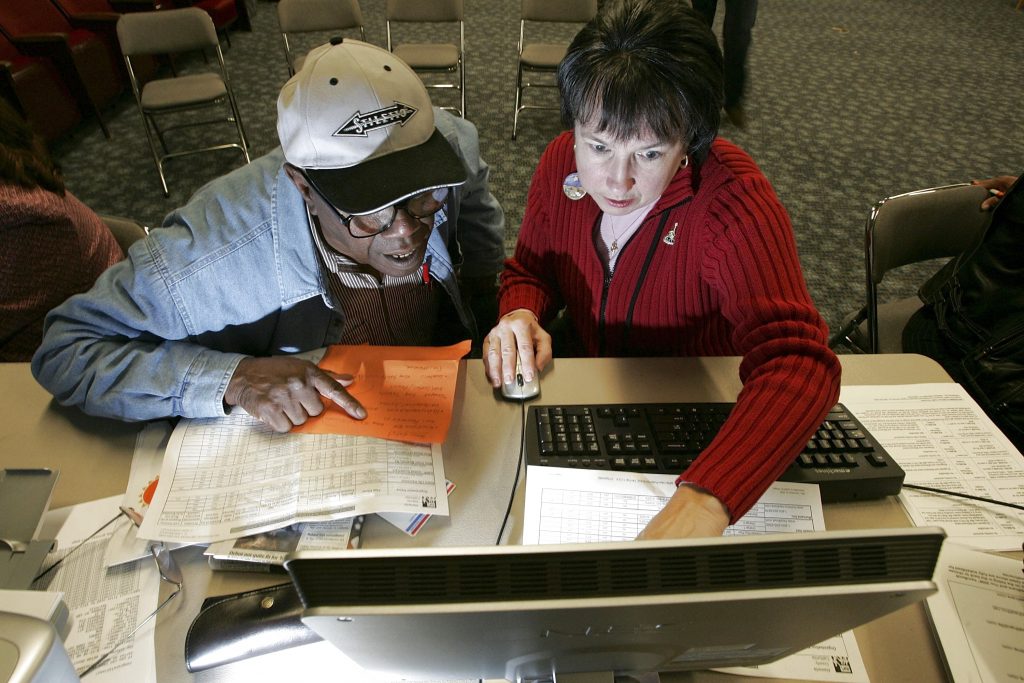