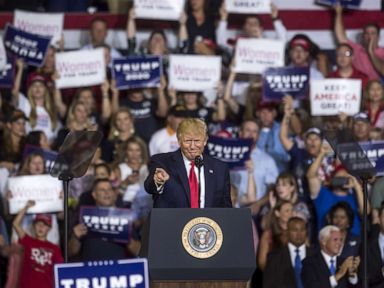 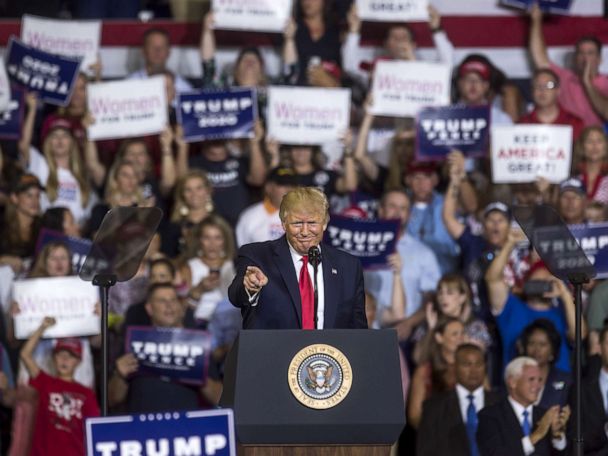 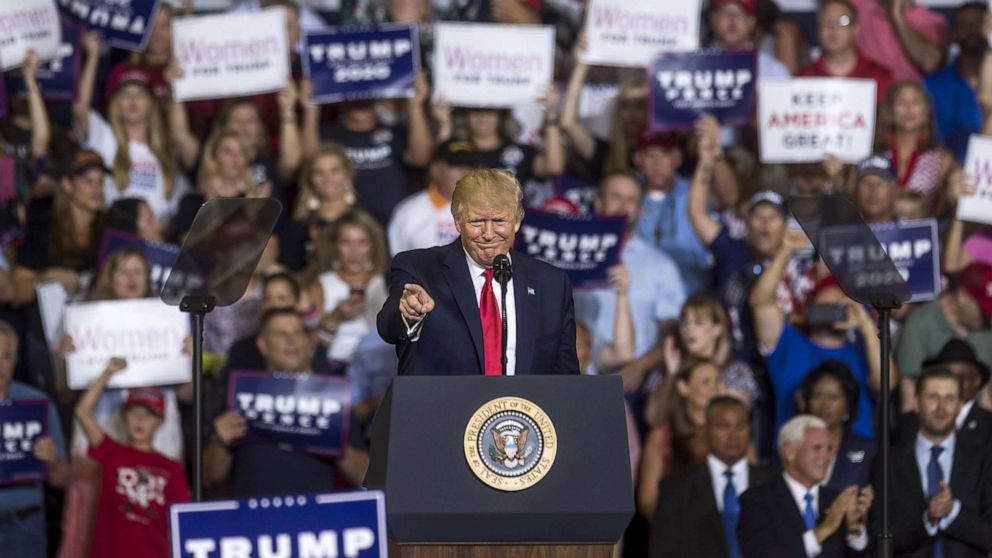 President Donald Trump blasted four Democratic congresswomen of color at a campaign rally on Wednesday night as a controversy over racist tweets telling them to “go back” to where they came from continues to rile both ends of the political spectrum.

Before departing for Greenville, North Carolina, Trump told reporters he was confident he was “winning the political fight” by doubling down on his attacks on Reps. Alexandria Ocasio-Cortez, D-N.Y., Ilhan Omar, D-Minn., Rashida Tlaib, D-Mich., and Ayanna Pressley, D-Mass.

He targeted the progressive congresswomen again later at his rally, eliciting “send her back” chants, and painting the Democratic Party as socialists to stoke his conservative base, says ABC News’ Rachel Scott.

“His base was energized,” Scott tells us on “Start Here.” “They wanted him to talk about this issue, and they responded.”

Pres. Trump continued his now days-long attack on four Democratic congresswomen at his rally in North Carolina on Wednesday night, eliciting chants of “send her back” from the crowd. https://t.co/zx537ayxSb pic.twitter.com/FAj8YHHQPC

The House this week condemned the president’s tweeted remarks in a resolution of disapproval, but lawmakers moved on Wednesday to table consideration of impeachment with a majority of Democrats voting with Republicans. Democratic leaders like Speaker Nancy Pelosi have continued to oppose impeachment efforts out of fear of overplaying their political hand going into the 2020 election, according to ABC News’ Trish Turner.

“The moment they cross into impeachment territory,” Turner says, “they think they turn off moderates, they turn off independents and that’s a really risky strategy.”

FaceApp, which can make users look younger, older or like a different gender, has gone viral on social media with several celebrities trying it out, but it’s raising privacy concerns because of its Russian origins.

Lawmakers have suggested investigating the app, and the Democratic National Committee warned 2020 presidential candidates to avoid it in a letter on Wednesday: “Unfortunately, this novelty is not without risk: FaceApp was developed by Russians.”

Digital Trends’ Mathew Katz reviews FaceApp’s terms of service on “Start Here” and concludes, “This is not anything more nefarious because it’s Russian than if it were from any other country.”

FaceApp founder Yaroslav Goncharov responded to the privacy concerns in a statement, noting that the company doesn’t “sell or share any user data with any third parties” and although “the core R&D team is located in Russia, the user data is not transferred to Russia.”

The World Health Organization has declared the Ebola outbreak in the Democratic Republic of Congo an international health emergency after a case was confirmed in Goma, a major transportation hub along the country’s eastern border with Rwanda.

The epidemic’s spread to to the city, home to more than 2 million people, raised alarm for officials within the global health arm of the United Nations, says ABC News’ Morgan Winsor, as health experts criticized the WHO for not declaring the Ebola outbreak an emergency sooner.

“A lot of experts have said that this outbreak has long met the conditions to constitute such a proclamation,” Winsor says on the podcast. “This type of declaration often mobilizes more aid, more resources to the region, and commands global attention.”

There have been 1,676 deaths so far, according to the country’s health ministry, including 1,582 from confirmed cases of Ebola and the rest from probable cases.

4. Reform is the new prison

“Orange is the New Black” author Piper Kerman appeared in front of a House Judiciary subcommittee this week urging criminal justice reform for the growing number of women behind bars.

“I can assure you that there is no institution more hierarchical, dominance-oriented, patriarchal and operating constantly on the threat and the promise of violence than an American prison — and this is not an accident, it is by design,” she said in her testimony on Tuesday, reflecting on her own time served for drug trafficking and money laundering.

A large topic of discussion during the hearing was the treatment of jailed mothers and how their families are affected by imprisonment, says ABC News’ Serena Marshall: “When you take a woman and send her to prison, you’re separating the family, and in many cases those children end up in foster care.”

When you play the game of thrones, you win or you die … but sometimes to win you need to nominate yourself: Three “Game of Thrones” actors paid $225 to be considered for an Emmy after HBO didn’t nominate them.

‘There were photos of topless women everywhere’: A former IT contractor for Jeffrey Epstein explains why he quit working for the alleged pedophile.

‘Cheap fix’: West Virginians are turning to wasp spray as an alternative to methamphetamine.

Jon Rahm is winning at a historic rate. He just hasn’t won a major yet.: If success in professional golf is defined by consistent contention and not just winning majors, Rahm is doing things we haven’t seen since Woods.

Amid the rowdy celebrations on the pitch in France after the U.S. won the World Cup, a player kneeled so her young son could sprinkle a handful of confetti over her head. Jessica McDonald closed her eyes and smiled.

McDonald is the only mother on the cup-winning U.S. women’s national team, and one of seven mothers in the National Women’s Soccer League, where she plays for the North Carolina Courage.

“About four or five years ago,” she told ABC News, “I thought about retirement, because getting paid on the salary from the NWSL and being a parent is probably — no, I shouldn’t say ‘probably’ — is one of the most difficult things to do.”

Thu Jul 18 , 2019
Facebook’s cryptocurrency Libra is facing an identity crisis and it hasn’t even officially been launched. Continue Reading Below In two days of bruising testimony, Facebook cryptocurrency chief David Marcus faced tough questions from lawmakers on both sides of the aisle who are concerned about Zuckerberg’s involvement, privacy, oversight and whether the […] 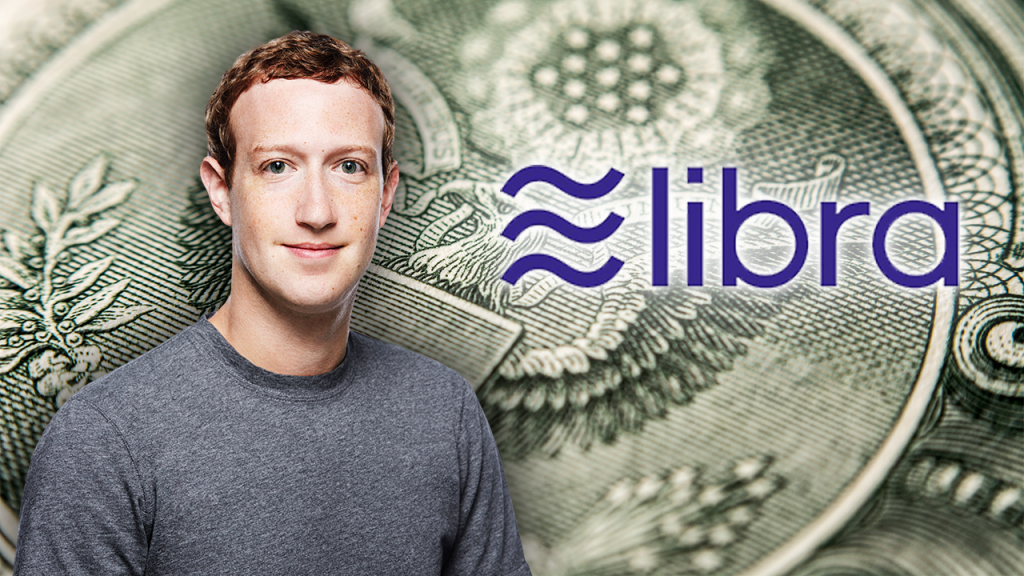