The S&P 500 clinched a new intraday record on Thursday after blowout earnings results from two of the biggest tech companies in the world: Apple and Facebook.

The Dow Jones Industrial Average last traded up about 250 points. The S&P 500 advanced 0.7% to trade just under a new all-time high it set at the start of trade in New York.

The tech-heavy Nasdaq Composite, which began the day up 1%, underperformed with a gain of 0.3%.

Apple said that sales jumped 54% during the quarter, with each product category seeing double-digit growth. The company also said it would increase its dividend by 7%, and authorized $90 billion in share buybacks. Apple shares were up 0.55%.

“The primary market trend remains positive,” said Keith Lerner, chief market strategist at Truist. “But we expect a choppier environment as tensions are set to persist between better economic growth and earnings prospects versus the potential for higher taxes and rising interest rates as the economy normalizes,” he added.

Thursday marks President Joe Biden’s 100th day in office. On Wednesday evening, he made his first address to a joint session of Congress where he pushed his so-far popular agenda, which includes a $2 trillion infrastructure plan as well as a freshly unveiled, $1.8 trillion plan for families, children and students.

Thursday is also the busiest day of the quarterly earnings season, with roughly 11% of the S&P 500 slated to provide quarterly updates.

McDonald’s published its results before the opening bell and told investors that its sales have finally topped pre-pandemic levels. The Dow component also raised its outlook for systemwide sales growth. Yet the shares were last little changed.

Facebook’s revenue jumped 48%, driven by higher-priced ads, sending its stock up as much as 7.3% and to a record high. Qualcomm shares added 4% after reporting a 52% jump in revenue.

Economic data released Thursday gave investors an update on the progress of the economic recovery.

First-quarter GDP hit an annualized rate of 6.4%, according to a report published by the Bureau of Economic Analysis, a sign that the U.S. economy began 2021 with an acceleration of commercial activity. Outside of the reopening-fueled third-quarter surge last year, it was the best period for GDP since the third quarter of 2003.

The Federal Reserve said Wednesday that it would hold interest rates near zero. The S&P slid from its high after Federal Reserve Chairman Jerome Powell said during a press conference following the Federal Open Market Committee’s decision that there are some signs of froth in the market.

“As vaccination rates accelerate, employment strengthens, and expansive fiscal policy adds further support to household and business incomes, investors are now looking for signs of whether the central bank safety net could be withdrawn sooner than expected,” she added.

Thu Apr 29 , 2021
A Wawa store hiring sign in Bethany Beach, Delaware. Stephanie Dhue | CNBC The economy could add more than 1 million jobs in April, economists say. Hiring seems to have strengthened as businesses reopen, leading some economists to make big predictions for the number of jobs added during the month. […] 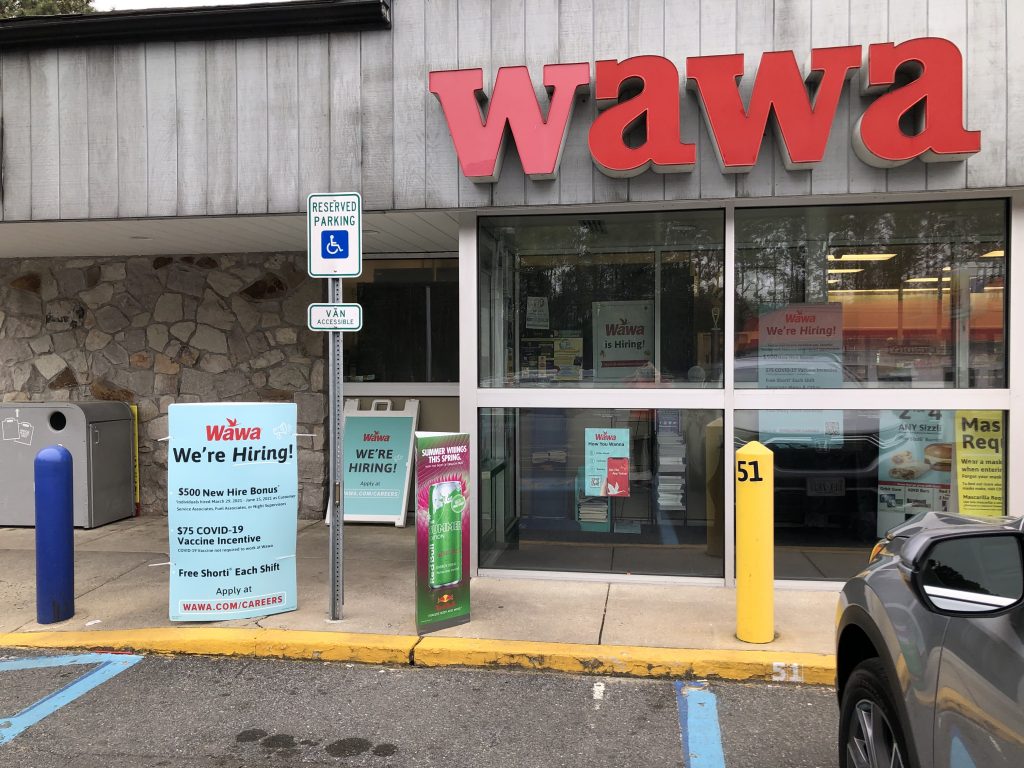