South Dakota Attorney General Jason Ravnsborg was “distracted” before he drove onto a highway shoulder where he struck and killed a pedestrian in September, state Secretary of Safety Craig Price said Monday. Price said 55-year-old Joseph Boever was walking on the side of the road and displaying some type of light on the night of Sept. 12 when he was struck by Ravnsborg’s 2011 Ford Taurus.

Price did not describe what led Ravnsborg to become distracted. The final line in the “narrative” section of the state’s report reads: “The specific distraction is still under investigation.”

Ravnsborg told a 911 dispatcher that he hit “something” in the middle of the road when Boever was killed. Boever’s relatives believed he was walking on the highway shoulder toward his truck that had crashed earlier that evening.

When a 911 dispatcher asked if it could have been a deer, Ravnsborg initially said, “I have no idea” before adding, “It could be.”

Ravnsborg initially told a county sheriff dispatched to the crash site near Highmore in central South Dakota that he thought he struck a deer on U.S. Highway 14. He said he returned to the scene the next morning and discovered he had struck a man.

CBS affiliate KELO-TV reports that the state also released a crash a photo of Ravnsborg’s vehicle. The station had obtained a photo of the vehicle just days after the crash as well.

Ravnsborg is a Republican, serving his first term in office after winning election in 2018.

The investigation is still waiting on numerous reports, including a coroner’s summary and toxicology results, Price said. The speed limit at the site of the crash was 65 mph, but it is unclear how fast Ravnsborg was driving.

The attorney general was driving home to Pierre from a Republican fundraiser some 110 miles away in Redfield. Ravnsborg had said he had nothing to drink.

A toxicology report taken roughly 15 hours after the crash showed no alcohol in Ravnsborg’s system, although at least one expert said that would have been enough time for alcohol to leave the body of someone who had been drinking heavily.

A preliminary autopsy report showed Boever died from extensive traumatic injuries from the crash. His relatives have questioned Ravnsborg’s version of events.

A crash reconstruction expert from Wyoming and the North Dakota Bureau of Criminal Investigation assisted the South Dakota Highway Patrol in the investigation.

Such accidents would ordinarily be investigated by the South Dakota Bureau of Criminal Investigation, which answers to the attorney general’s office. The other agencies took on the investigation to avoid a conflict of interest.

Ravnsborg has continued to work as attorney general.

Mon Nov 2 , 2020
The Dow Jones Industrial Average jumped on Monday, the first trading day of the month, as markets recovered some of the sharp losses from last week and braced for the U.S. presidential election. The 30-stock Dow traded 271 points higher, or 1%. The S&P 500 gained 0.6%. The Nasdaq Composite […] 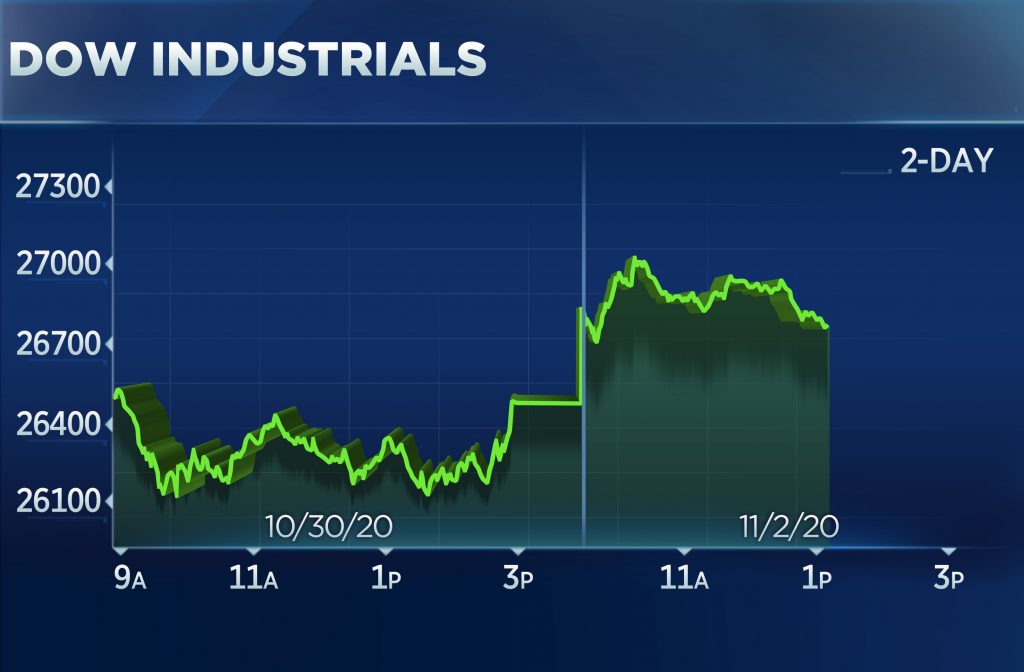