When Microsoft-owned LinkedIn said last month that it would add a video-calling feature to direct messages, it said it would start allowing users to kick off calls through Microsoft Teams, Zoom and Verizon-owned Blue Jeans.

Skype, Microsoft’s third-biggest acquisition after LinkedIn and Nokia, was left out.

The effort stemmed from a project engineers developed for a Covid-response hackathon LinkedIn held earlier this year. LinkedIn employees use Blue Jeans internally, and they also chose to incorporate “the other most popular services, Zoom and, in our own backyard, Teams,” Chris Szeto, senior director of product, told CNBC. LinkedIn employees worked with the team behind Microsoft Teams to build the integration, Szeto said.

The absence of Skype in the implementation exemplifies the video-calling service’s diminishing presence in a year when competitors became more prominent than ever, as the coronavirus pandemic forced people to connect online. Skype is still around — it’s just been upstaged.

More recently, Skype has lagged behind its competitors. The Skype iPhone app failed to crack the top 200 apps ranked on Apple’s App Store in August and September, according to data from app-analytics company AppAnnie, while Zoom for iPhone never left the top 20 and Google Meet was generally in the top 100.

Microsoft has brought out many Teams updates this year, including some, such as breakout rooms and support for up to 1,000 meeting participants, designed to help stave off newcomer Zoom, whose usage spiked during the pandemic.

Skype has received some enhancements this year, too, but not as many as Teams. It’s now possible to raise your hand or change your virtual background during a Skype call, for instance.

Microsoft is also trying to broaden Skype usage by placing the app in some of its consumer-facing products. Soon, when you open a new tab in the Edge web browser or the online version of Outlook, there will be a button for quickly creating a Skype call. If you invite your friends to a call by sending a link, they can join without downloading or signing up for Skype. Microsoft also started testing a Skype integration in Windows 10 — you can start a call by clicking a new button in the System Tray.

But these feature updates and integrations are unlikely to help Skype grow, said Jim Gaynor, a research vice president at Directions on Microsoft, a company that advises companies on using Microsoft products.

“If Skype was going to become bigger, this year was the time for it,” Gaynor said. “What happened right now was the perfect storm, the perfect set of circumstances for any online communications product. If you cannot significantly grow and make your product flourish and thrive now, forget about it, you’re too late now.”

Skype is an old brand by tech standards. The company was founded in 2003 — a year before Facebook — and went through several owners while amassing a devoted core of users. It also had a solid place in the tech-cultural zeitgeist as a tool for distant relatives to stay in touch.

By the fourth quarter of 2010 it had an average of 145 million monthly connected users, and Microsoft bought it from a private investor group in 2011 for $8.6 billion — its largest acquisition ever at the time. Microsoft’s then-CEO, Steve Ballmer, said that the deal could bring together hundreds of millions, or even billions, of consumers. (In a 2019 blog post a Microsoft engineer wrote that Skype had reached “four billion total users, more than 300 million monthly active users, and more than 40 million concurrent users.”)

Then-Microsoft CEO Steve Ballmer speaks during a news conference about Microsoft’s purchase of Skype in San Francisco on May 10, 2011.

Ballmer’s successor, Satya Nadella, has moved Microsoft away from some consumer markets. In 2014, a few months after Nadella became CEO, Microsoft drew on the Skype name when it rebranded its Lync unified-communications software to Skype for Business.

In 2014 Slack came out with its team-communications software. Microsoft responded by introducing Teams in 2016. Then, in 2017, Microsoft declared that Teams, not Skype for Business, would be its main work communications program in its Office 365 productivity app bundle. Last year the company started putting new Office 365 customers on Teams. Some organizations still use Skype for Business, though, Gaynor said.

While Microsoft was busy deemphasizing Skype, other communication apps for consumers, such as Apple‘s FaceTime and iMessage, Facebook‘s Messenger and WhatsApp and Tencent’s WeChat, were rising in popularity.

Microsoft seems to be telegraphing Skype’s eventual demise. This year Microsoft made it possible for Skype users to call Teams users, and vice-versa. At the Ignite conference for IT professionals last week, more than 100 sessions touched on Teams, while there was just one talking about Skype — and it was about moving to Teams.

Microsoft says Skype is still important, even as it expands Teams for consumer use. For instance, soon it will be possible to keep a shopping list or share your location with friends or family members in Teams.

“Skype will remain a great option for people who love it and want to connect with chat and video calling capabilities,” a Microsoft spokesperson told CNBC in an email.

But perhaps the best measure of how far Skype has fallen comes from popular culture. Last month, “The Late Late Show with James Corden” took a swipe at Skype. He and other actors playing Skype employees think up ways to overtake Zoom — the head of marketing, after arriving late, says, “Sorry, I had the wrong Zoom room.” The workers decide to establish a raffle. Every time someone signs up for Skype, they’re given a shot at winning a vacation on a cruise ship.

“The world certainly does need some humor right now and we appreciate the comedic gesture,” the spokesperson wrote.

How the outlawed practice of redlining is still hurting Black Americans

Sat Oct 10 , 2020
The 1968 Fair Housing Act outlawed redlining nationwide. But the disastrous effects of the discriminatory practice are still contributing to today’s wealth gap between Black and White Americans. “I think you see it in every city in America,” Atlanta councilman Amir Farokhi told CBS News’ Michelle Miller. “This is where […] 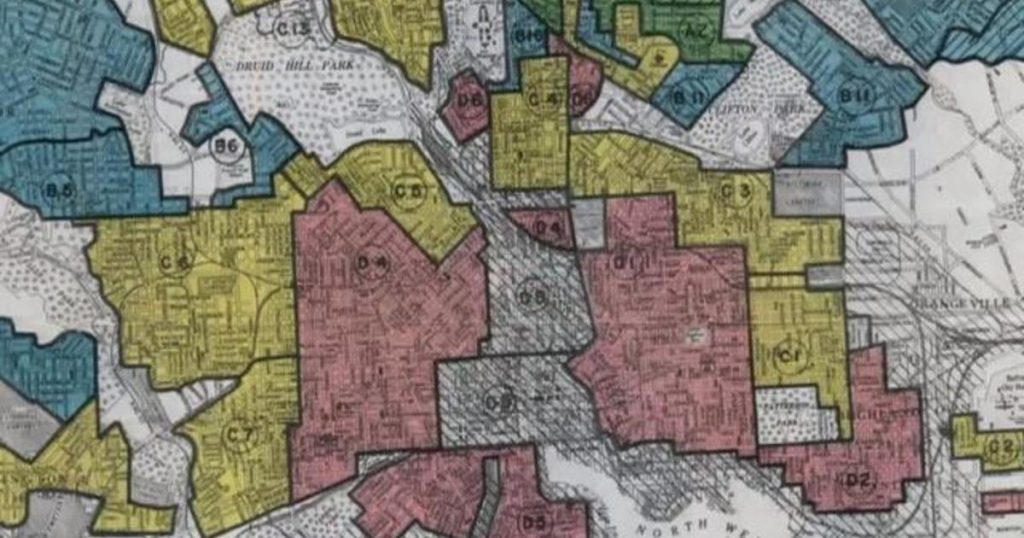