Michigan Governor Gretchen Whitmer addresses the media about the flooding along the Tittabawassee River, after several dams breached, in downtown Midland, Michigan, U.S., May 20, 2020.

Federal authorities charged six men for allegedly plotting to kidnap Michigan Gov. Gretchen Whitmer from her vacation home before November’s presidential election, with one of the defendants allegedly saying they would then try Whitmer for “treason,” officials revealed Thursday.

Seven other men known to be members or associates of the militia group Wolverine Watchmen were charged under Michigan’s anti-terrorism law.

The investigation that led to the case began in early 2020 when “the FBI became aware through social media that a group of individuals were discussing the violent overthrow of certain government and law-enforcement components,” court records show.

The FBI later heard the men and others talking about attacking the Michigan state Capitol and using Molotov cocktails to destroy police vehicles. The plot allegedly included one of the men surveilling Whitmer’s vaction home.

The defendants were arrested on Wednesday night, according to U.S. Attorney for the Western District of Michigan Andrew Birge.

Vehicles are seen outside of a home the FBI searched in a Hartland Township mobile home park late Wednesday night and into the morning in connection of a plot to kidnap Michigan Governor Gretchen Whitmer, on October 8, 2020 in Heartland, Michigan.

Several of the men were arrested as they met in the eastern part of Michigan to pool money to buy explosives, Birge said.

One of the defendants had said he already had bought an 800,000-volt taser to be used in the kidnap plot, according to a criminal complaint.

Michigan Attorney General Dana Nessel, the top state law enforcement official, at a press conference announced the arrests of seven other men on state charges related to the same wide-ranging investigation that led to the federal prosecution of the six other men.

Whitmer earlier this year drew the ire of President Donald Trump, other conservatives and members of militia groups for strict her stay-at-home orders issued in response to the coronavirus pandemic.

That same month, thousands of demonstrators, some of whom were armed, protested Whitmer’s orders at the state capitol in Lansing.

A criminal complaint that includes an FBI agent’s affidavit laying out the case against the six men on June 6, Croft and Fox, along with about 13 other people from several states, met in Dublin, Ohio.

At that meeting, the group talked about creating a society that followed the U.S. Bill of Rights and where they could be self-sufficient,” the complaint said. “They discussed different ways of achieving this goal from peaceful endeavors to violent actions.”

A broken window is seen on a home the FBI searched in a Hartland Township mobile home park late Wednesday night and into the morning in connection with a plot to kidnap Michigan Governor Gretchen Whitmer, on October 8, 2020 in Heartland, Michigan.

“At one point, several members talked about state governments they believed were violating the U.S. Constitution, including the government of Michigan and Governor Gretchen Whitmer,” the complaint said.

“Several members talked about murdering ‘tyrants’ or ‘taking; a sitting governor. The group decided they needed to increase their numbers and encouraged each other to talk to their neighbors and spread their message. As part of that recruitment effort, Fox reached out to a Michigan based militia group.”

On June, Fox allegeldy told an FBI source that he “needed ‘200 men’ to storm the Capitol building in Lansing, Michigan, and take hostages, including the Governor,” the complaint said.

“Fox explained they would try the Governor of Michigan for “treason,” and he said they would execute the plan before the November 2020 elections.”

At at July 27 meeting with a confidential FBI source, Fox discussed “their best opportunity to abduct Governor Whitmer,” which would be “when she was arriving at, or leaving, either her personal vacation home or the Governor’s official summer residence,” the affidavit saud,

Fox then said that after kidnapping Whitmer, the group “would remove her to a secure location in Wisconsin for ‘trial,’ ” the affidavit said

Fox allegedly said that day, “Snatch and grab, man. Grab the f— Governor. Just grab the b–. Because at that point, we do that, dude — it’s over,” court documents allege.

And on Sept. 30 Fox phoned confidential FBI source and “discussed purchasing a taser for use in the kidnapping operation,” the agent wrote.

Fox told the informant that his co-defendants in the case “were aware of the $4,000 cost” of that taser, the agent wrote.

“On October 2 … Fox confirmed he purchased an 800,000 volt taser in an encrypted chat message with” the FBI’s source, the agent wrote.

The investigation that led to the arrests involved multiple confidential human sources and undercover FBI personnel.

A press conference on the case is scheduled for Thursday afternoon.

The case came to light shortly after Trump, during an interview on Fox Business, bragged about having won Michigan in the 2016 presidential election, and criticized Whitmer.

“And we should win it again because I brought so much business there, because she’s the lockup queen,” Trump said of Whitmer.

“What she has done to that place is horrible. She’s locked it up. She’s got people like living in prison. The courts overturned her, they said what you are doing is unconstitutional.

Thu Oct 8 , 2020
Election volunteer Nancy Gavney verifies voter and witness signatures on absentee ballots as they are counted at the City Hall during the presidential primary election held amid the coronavirus disease (COVID-19) outbreak in Beloit, Wisconsin, April 7, 2020. Daniel Acker | Reuters A federal appeals court on Thursday blocked a […] 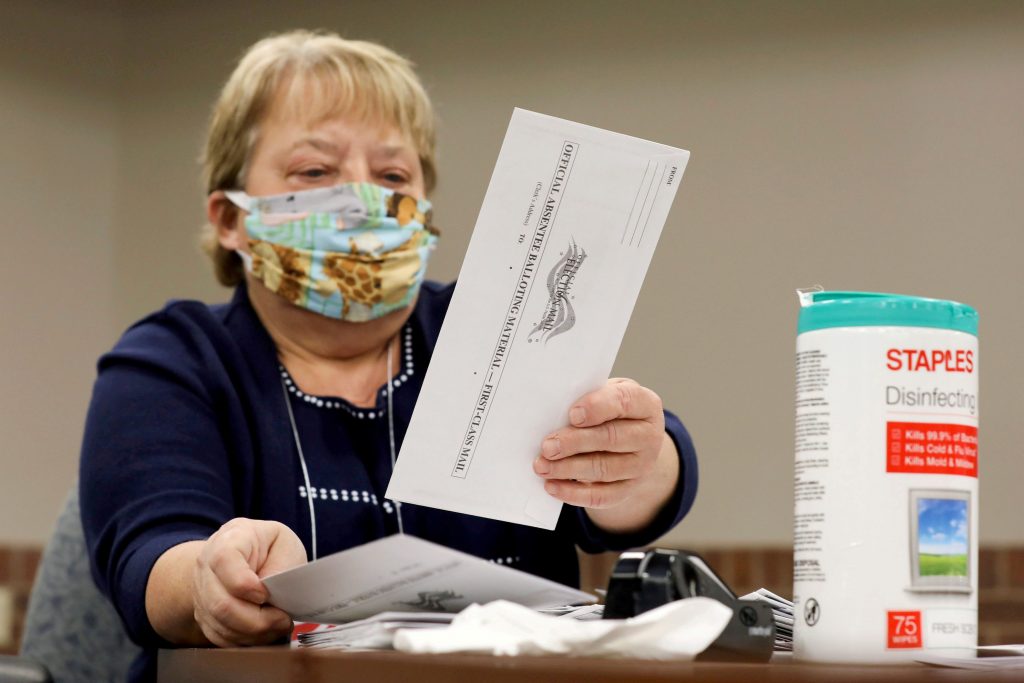