Hundreds of people smashed windows, stole from stores and clashed with police in Chicago’s upscale Magnificent Mile shopping district and other parts of the city

CHICAGO — Hundreds of people smashed windows, stole from stores and clashed with police early Monday in Chicago’s upscale Magnificent Mile shopping district and other parts of the city.

At one point, shots were fired at police and officers returned fire, police spokesman Tom Ahern said on Twitter. No officers were injured in the shooting. Many of the businesses that were ransacked had recently opened after Chicago protests of George Floyd’s May 25 death in Minneapolis devolved into chaos.

It wasn’t immediately clear what led to the unrest, which began shortly after midnight, but anti-police graffiti was seen in the area of the Magnificent Mile, which is one of Chicago’s most-visited tourist attractions. Hours earlier, dozens of people had faced off with police after officers shot and wounded a person Sunday in the city’s Englewood neighborhood, located about 10 miles (16 kilometers) away.

Asked for updates on the situation, Ahern told The Associated Press in an email that police planned to hold a news conference Monday morning. Police Superintendent David Brown and Mayor Lori Lightfoot were expected to attend.

Along the Magnificent Mile, people were seen going in and out of stores carrying shopping bags full of merchandise as well as at a bank, the Chicago Tribune reported, and as the crowd grew vehicles dropped off more people in the area. On streets throughout the downtown area, empty cash drawers from stores were strewn about and ATMs were ripped open.

Stores miles from downtown were also ransacked, with parking lots littered with glass and items from inside the stores. Clothes hangers and boxes that once contained television sets and other electronics were seen — evidence that thieves had taken racks of clothes and removed them from the hangers.

“This was obviously very orchestrated,” the Rev. Michael Pfleger, a prominent Roman Catholic priest and activist on the city’s South Side, told WBBM-TV as cameras panned the downtown area.

One officer was seen slumped against a building, several arrests were made and a rock was thrown at a police vehicle, the newspaper said. Police worked early Monday to disperse the crowds.

There was a large police presence Monday morning outside an Apple store located north of Chicago’s downtown area. Blocks away, debris was strewn in parking lots in front of a Best Buy and a large liquor store.

Train and bus service into downtown was temporarily suspended at the request of public safety officials, the Chicago Transit Authority said on Twitter. Bridges over the Chicago River were lifted, preventing travel to and from the downtown area, and Illinois State Police blocked some expressway ramps into downtown.

Chicago and its suburbs, like many other cities, saw unrest following the death of Floyd. Chicago’s central business district and its commercial areas were shut down for several days after violence erupted and stores were damaged in the wake of marches protesting Floyd’s death. Floyd, a Black man who was handcuffed, died after a white officer pressed his knee against Floyd’s neck for nearly eight minutes as Floyd said he couldn’t breathe.

In the Sunday shooting in Englewood, police said in a statement that they responded about 2:30 p.m. Sunday to a call about a person with a gun and tried to confront someone matching his description in an alley. He fled from officers on foot and shot at officers, police said.

More than an hour after the shooting, police and witnesses said a crowd faced off with police after someone reportedly told people that police had shot and wounded a child. That crowd eventually dispersed.

Mon Aug 10 , 2020
The Trump administration is open to resuming coronavirus aid talks with Democratic leaders and would offer more aid money to try to reach a compromise, Treasury Secretary Steven Mnuchin said Monday.  “The president is determined to spend what we need to spend. … We’re prepared to put more money on the table,” he […] 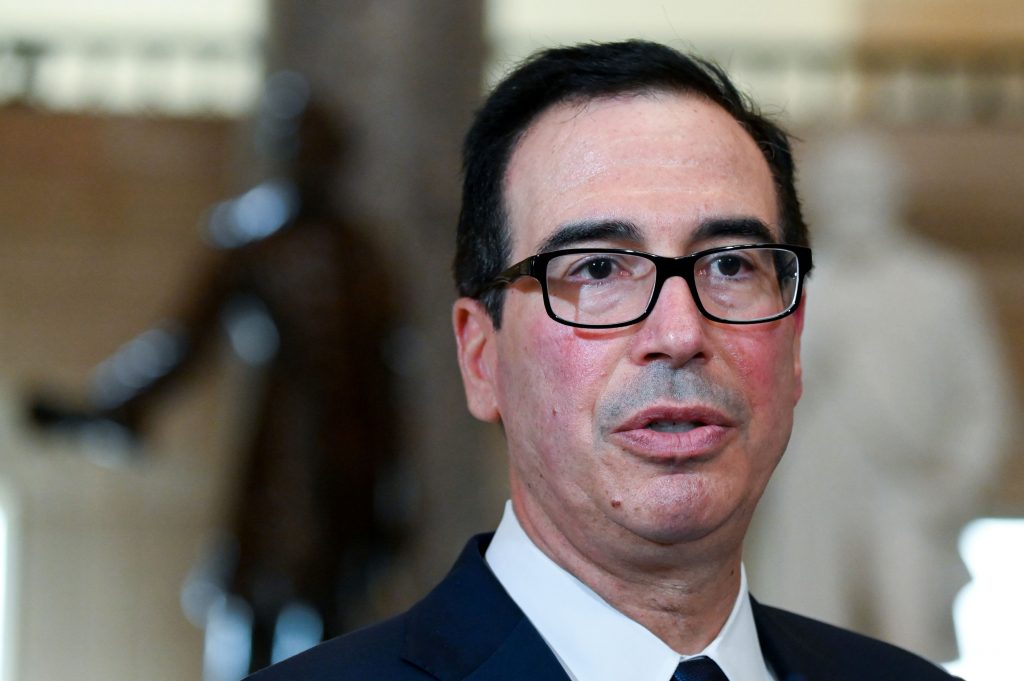