U.S. Senate Minority Leader Chuck Schumer (D-NY) blows a kiss to Speaker of the House Nancy Pelosi as he and Senator Mitch McConnell arrive for a joint session to certify the 2020 election results, inside the House Chamber on Capitol Hill in Washington, U.S., January 6, 2021.

“What happened at the U.S. Capitol yesterday was an insurrection against the United States, incited by the president. This president should not hold office one day longer,” the New York Democrat said in a statement.

“The quickest and most effective way — it can be done today — to remove this president from office would be for the Vice President to immediately invoke the 25th amendment,” he continued. “If the Vice President and the Cabinet refuse to stand up, Congress should reconvene to impeach the president.”

Biden will become president on Jan. 20 after Trump for months spouted conspiracy theories that widespread election fraud cost him a second term in office. More lawmakers have warned that another two weeks of Trump’s presidency could further erode American democracy or lead to more loss of life after four people died during the Capitol attack Wednesday.

Vice President Mike Pence presides over a Joint session of Congress to certify the 2020 Electoral College results after supporters of President Donald Trump stormed the Capitol earlier in the day on Capitol Hill in Washington, DC on January 6, 2020.

More than 100 lawmakers have called for the president’s removal through the 25th Amendment, impeachment or resignation, according to an NBC News tally. Only one of them — Rep. Adam Kinzinger of Illinois — is a Republican.

Congress adjourned for at least the rest of the week after it counted Biden’s electoral victory early Thursday. It is unclear if either chamber would return in time to vote to remove the president in the 13 days before the inauguration. While Schumer’s Democrats will control the Senate in coming weeks after Senators-elect Raphael Warnock and Jon Ossoff of Georgia take office, Republicans will hold the chamber until they are sworn in.

Neither House Speaker Nancy Pelosi, D-Calif., or Senate Majority Leader Mitch McConnell, R-Ky., have weighed in on whether to expel the president after the Capitol breach. White House press secretary Kayleigh McEnany did not immediately respond to a request for comment on Schumer’s statement.

Under the 25th Amendment, Vice President Mike Pence and a majority of the Cabinet can remove Trump. The president could contest the move. Congress would then need to vote with a two-thirds majority to push him out of office.

Informal staff discussions about invoking the 25th Amendment have taken place in the White House, NBC News reported. It is unclear whether the talks have gone up to Cabinet secretaries or Pence.

The Democratic-held House impeached Trump in December 2019 in part because the president pushed Ukraine to investigate the Biden family during the presidential campaign. The GOP-controlled Senate voted against removing him from office last year. Among Republicans, only Sen. Mitt Romney of Utah voted to convict the president.

House Democrats drafted articles of impeachment after the breach of the Capitol. In a statement after she drew up articles on Wednesday, Rep. Ilhan Omar, D-Minn., said Trump “should be impeached and removed from office for his open sedition” after what she called a “coup attempt.”

It is unclear whether the Senate would have the two-thirds support needed to remove Trump from office now. Some of his GOP allies started to distance themselves from him after he helped to fuel the attack on the Capitol.

“All I can say is count me out. Enough is enough,” Sen. Lindsey Graham, R-S.C., said on the Senate floor after the government regained control of the Capitol.

Thu Jan 7 , 2021
U.S. Transportation Secretary Elaine Chao resigned Thursday because of the mob attack on the Capitol fueled by President Donald Trump‘s rhetoric, saying the riot had “deeply troubled” her. Chao is the wife of Senate Majority Leader Mitch McConnell of Kentucky, and the first Trump Cabinet member to quit in connection […] 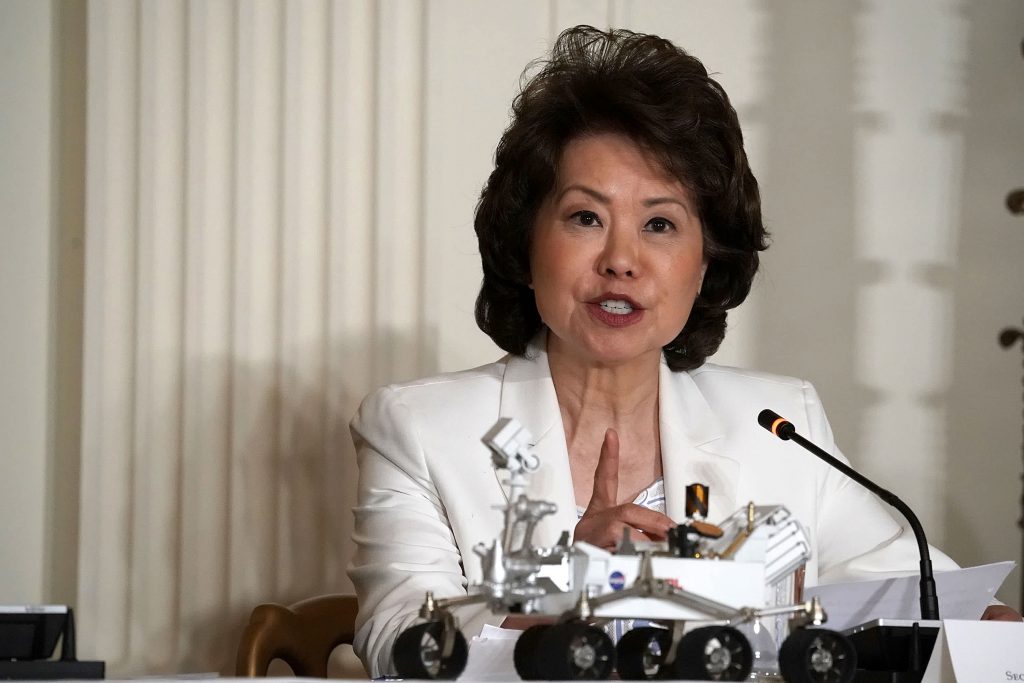