Russian one ruble coin and Russian flag displayed on a screen are seen in this multiple exposure illustration photo taken in Krakow, Poland on March 8, 2022.

Russia’s ruble hit 52.3 to the dollar on Wednesday, an increase of roughly 1.3% on the previous day and its strongest level since May 2015.

That’s a world away from its plunge to 139 to the dollar in early March, when the U.S. and European Union started rolling out unprecedented sanctions on Moscow in response to its invasion of Ukraine.

The ruble’s stunning surge in the following months has given fuel to the Kremlin as “proof” that Western sanctions aren’t working.

In late February, following the ruble’s initial tumble and four days after its invasion of Ukraine began on Feb 24., Russia more than doubled the country’s key interest rate to a whopping 20% from a prior 9.5%. Since then, the currency’s value has improved to the point that it’s lowered the interest rate three times to reach 11% in late May.

The ruble has actually gotten so strong that Russia’s central bank is actively taking measures to try to weaken it, fearing that this will make their exports less competitive.

But what’s really behind the currency’s rise, and can it be sustained?

Russia is raking in record oil and gas revenue

The reasons are, to put it simply: strikingly high energy prices, capital controls and sanctions themselves.

Russia is the world’s largest exporter of gas and the second-largest exporter of oil. Its primary customer? The European Union, which has been buying billions of dollars worth of Russian energy per week while simultaneously trying to punish it with sanctions.

That’s put the EU in an awkward spot – it has now sent exponentially more money to Russia in oil, gas and coal purchases than it has sent Ukraine in aid, which has helped fill the Kremlin’s war chest. And with Brent crude prices 60% higher than they were this time last year, even though many Western countries have curbed their Russian oil buying, Moscow is still making a record profit.

Russian President Vladimir Putin and Defence Minister Sergei Shoigu attend a wreath-laying ceremony, which marks the anniversary of the beginning of the Great Patriotic War against Nazi Germany in 1941, at the Tomb of the Unknown Soldier by the Kremlin wall in Moscow, Russia June 22, 2022.

In the Russia-Ukraine war’s first 100 days, the Russian Federation raked in $98 billion in revenue from fossil fuel exports, according to the Centre for Research on Energy and Clean Air, a research organization based in Finland. More than half of those earnings came from the EU, at about $60 billion.

And while many EU countries are intent on cutting their reliance on Russian energy imports, this process could take years – in 2020, the bloc relied on Russia for 41% of its gas imports and 36% of its oil imports, according to Eurostat.

Yes, the EU passed a landmark sanctions package in May partially banning imports of Russian oil by the end of this year, but it had significant exceptions for oil delivered by pipeline, since landlocked countries like Hungary and Slovenia couldn’t access alternative oil sources that are shipped by sea.

“That exchange rate you see for the ruble is there because Russia is earning record current account surpluses in foreign exchange,” Max Hess, a fellow at the Foreign Policy Research Institute, told CNBC. That revenue is mostly in dollars and euros via a complex ruble-swap mechanism.

“Although Russia may be selling slightly less to the West right now, as the West moves to cutting off [reliance on Russia], they are still selling a ton at all-time high oil and gas prices. So this is bringing in a big current account surplus.”

Russia’s current account surplus from January to May of this year was just over $110 billion, according to Russia’s central bank – more than 3.5 times the amount of that period last year.

Capital controls – or the government’s limiting of foreign currency leaving its country – have played a big role here, plus the simple fact that Russia can’t import as much any more thanks to sanctions, meaning it’s spending less of its money buying stuff from elsewhere.

It’s really a Potemkin rate, because sending money from Russia abroad given the sanctions — both on Russian individuals and Russian banks — is incredibly difficult.

“Authorities implemented pretty strict capital controls as soon as sanctions came on,” said Nick Stadtmiller, director of emerging markets strategy at ‎Medley Global Advisors in New York. “The result is money is flowing in from exports while there are relatively few capital outflows. The net effect of all this is a stronger ruble.”

Russia has now relaxed some of its capital controls and lowered its interest rate in an effort to weaken the ruble, since a stronger currency actually hurts its fiscal account.

The ruble: really a ‘Potemkin rate’?

Because Russia is now cut off from the SWIFT international banking system and blocked from trading internationally in dollars and euros, it’s been left to essentially trade with itself, Hess said. That means that while Russia’s built up a formidable volume of foreign reserves that bolster its currency at home, it can’t use those reserves to serve its import needs, thanks to sanctions.

The ruble’s exchange rate “is really a Potemkin rate, because sending money from Russia abroad given the sanctions — both on Russian individuals and Russian banks — is incredibly difficult, not to mention Russia’s own capital controls,” Hess said.

In politics and economics, Potemkin refers to fake villages that were purportedly constructed to provide an illusion of prosperity to Russian empress Catherine the Great.

“So yes, the ruble on paper is quite a bit stronger, but that’s the result of crashing imports, and what’s the point of building up forex reserves, but to go and buy things from abroad that you need for your economy? And Russia can’t do that.”

People line up near Euro and U.S. dollars rates to ruble sign board at the entrance to the exchange office on May 25, 2022 in Moscow, Russia. Russia moved closer to a default on Wednesday after the U.S. Treasury let a key sanctions exemption expire.

“We should really be looking at the underlying issues in the Russian economy, including the cratering imports,” Hess added. “Even if the ruble says it has a high value, that is going to have a devastating impact on the economy and on quality of life.”

Does this reflect the actual Russian economy?

Does the ruble’s strength mean that Russia’s economic fundamentals are sound and have escaped the blow of sanctions? Not so fast, analysts say.

“Ruble strength is linked to a surplus in the overall balance of payments, which is much more driven by exogenous factors linked to sanctions, commodity prices and policy measures than by longer term underlying macroeconomic trends and fundamentals,” said Themos Fiotakis, head of FX research at Barclays.

Russia’s Ministry of Economy said in mid-May that it expects unemployment to hit nearly 7% this year, and that a return to 2021 levels is unlikely until 2025 at the earliest.

Since Russia’s war in Ukraine began, thousands of international companies have exited Russia, leaving huge numbers of unemployed Russians in their wake. Foreign investment has taken a massive hit, and poverty nearly doubled in just the first five weeks of the war alone, according to Russia’s federal statistics agency Rosstat.

“The Russian ruble is no longer an indicator for the health of the economy,” Hess said. “While the ruble has surged thanks to the Kremlin’s interference, its inattention to Russian’s well-being continues. Even Russia’s own statistics agency, famous for massaging numbers to meet the Kremlin’s goals, acknowledged that the number of Russians living in poverty rose from 12 [million] to 21 million people in Q1 2022.”

As for whether the ruble’s strength can be sustained, Fiotakis said, “It is very uncertain and depends on how the geopolitics evolve and policy adjusts.”

Thu Jun 23 , 2022
An artist’s impression of the Saint-Malo at sea. According to Brittany Ferries will have a battery capacity of 11.5 megawatt hours. Brittany Ferries A ship set to carry passengers between the U.K. and France in the next few years will be the largest hybrid-vessel ever built, according to operator Brittany […] 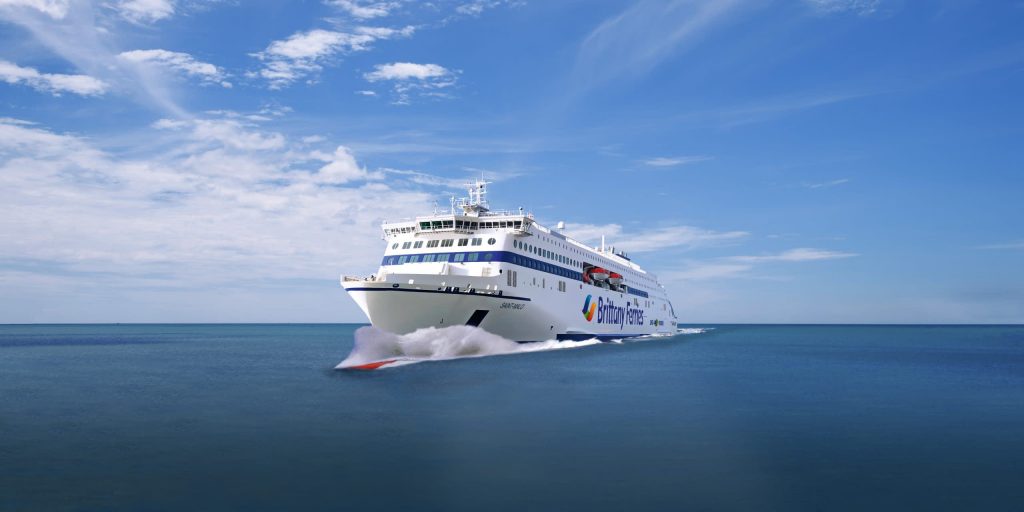