Journalist Ivan Golunov (R) is greeted as he leaves the offices of the Main Investigations Directorate of the Moscow police after being released from custody; Golunov, who works for the online news portal Meduza, was detained on 6 June 2019 in central Moscow on suspicion of drug dealing; the police has dropped the investigation against Golunov due to lack of evidence.

A Russian investigative journalist who was charged with drug dealing, widely seen as fabricated charges, has been freed after a widespread public outcry and media rebellion against the case.

Journalist Ivan Golunov was arrested last Thursday by police in Moscow who said they found mephedrone on Golunov and cocaine at his flat. He was then charged over the weekend with possessing drugs with intent to supply.

Golunov denied all the accusations and said the drugs had been planted on him. The case quickly quickly garnered public attention, however, and was widely seen as an attempt to frame the reporter and restrict media freedom. As such, his release from house arrest late Tuesday has been lauded as a triumph for press freedom and protest in Russia.

Golunov wept as he was freed from police custody on Tuesday (after a brief house arrest) and said he would continue his investigative work which has seen him delve into alleged corruption among Moscow officials and other topics.

“I will continue the work I was doing. I will be doing investigations because I have to justify the trust of those who supported me,” he said on Tuesday, according to local Russian media reports.

His lawyer Sergey Badamshin said the release represented a triumph of law and justice. “”In Golunov’s case, law and justice won in the end. This is much more than simply a dismissal of a criminal case against an innocent person,” he said, Russian news agency Tass reported.

The release came after Russian Interior Minister Vladimir Kolokoltsev said earlier on Tuesday that the criminal case against Golunov on suspicion had been dismissed “in view of the failure to prove his participation in the crime.” The officers that apprehended Golunov have been suspended and an investigation has been launched, Tass said.

Golunov’s employer — the Russian-language news site Meduza, based in Latvia — said the release of Golunov from his house arrest was “the result of an unprecedented international solidarity campaign among both journalists and their allies.”

“Together, we made the unbelievable happen: we stopped the criminal prosecution of an innocent man. Thank you!,” a statement on its website said.

Pressure on the authorities

Pressure had mounted on the Russian authorities to free Golunov following his arrest last week and charges at the weekend. His arrest prompted a rare show of solidarity in Russia from the public and press alike.

Public protests have been held place in Moscow, and newspapers Vedemosti, RBC and Kommersant joined forces issuing coordinated headlines stating “I/We are Ivan Golunov” and called for his release.

Golunov’s case has sparked interest internationally. Russia is known as a country where journalists are routinely harassed and subjected to violent attacks if they have carried out investigative work into crime or corruption. It was ranked at 149 out of 180 nations for press freedom, according to free press advocacy group Reporters Without Borders’ 2019 World Free Press Index.

Journalist Ivan Golunov (centre, with his back to the camera) talks to reporters outside the offices of the Main Investigations Directorate of the Moscow police after being released from custody.

In its latest assessment of Russia, the group said “the climate has become very oppressive for those who question the new patriotic and neo-conservative discourse, or just try to maintain quality journalism ” and that more journalists are now in prison since the fall of the Soviet Union in 1991.

Freeing Golunov has been seen as a reflection of the authorities’ nervousness at potential wider unrest that’s rumbling following an unpopular pension reform and a tax hike, however. Ahead of the journalist’s release, the Kremlin said that it was following the “high-visibility” case closely.

President Vladimir Putin has been asked by the interior minister to dismiss two high-ranking police officials over the Golunov case. Putin’s spokesman Dmitry Peskov said the president would review that request “in a timely fashion,” Tass said.

Wed Jun 12 , 2019
Steps by the Chinese and Hong Kong governments in recent years have raised unease among Hong Kong residents about their future, a concern that burst out in a protest by hundreds of thousands of people last weekend. Many in the semiautonomous Chinese territory worry the freedoms they enjoy under a […] 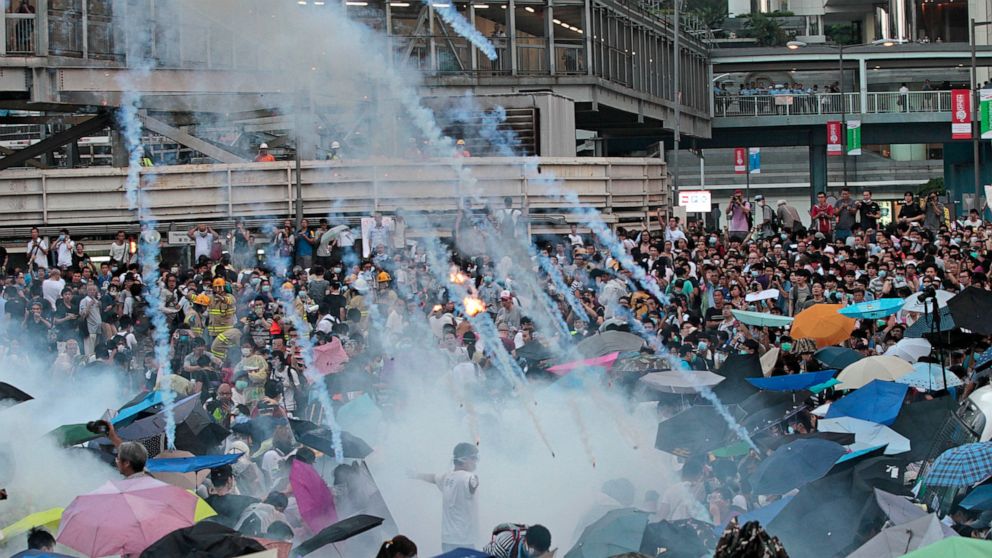