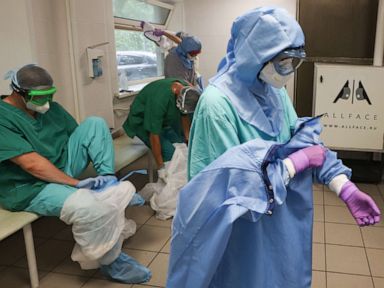 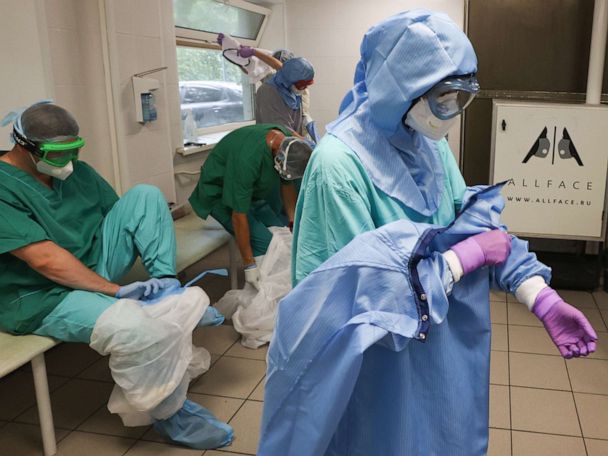 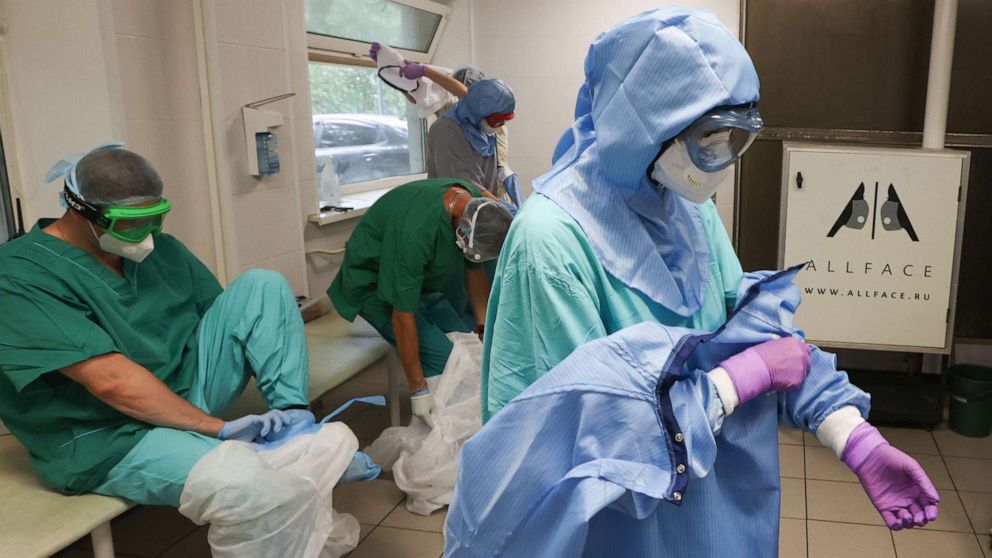 Russia is enduring a devastating third wave of the coronavirus pandemic, registering record numbers of daily virus deaths many days for the past month as the virus rages in the country where there are few quarantine restrictions in place and much of the population is reluctant to get vaccinated.

In many parts of the country doctors have said hospitals have been overflowing for almost a month, placing huge strain on medical workers already battered by a year and a half of the pandemic.

Despite surging death tolls, authorities have declined to introduce tough restrictions or even strictly enforce ones in place like mask wearing.

In the late spring, authorities had hailed a supposed end to the worst of the pandemic, following a grim winter that saw Russia reach the highest death toll per capita among developing nations. The few restrictions in place were almost all lifted. President Vladimir Putin at an economic forum in St. Petersburg at the start of June told a large crowd that “life is gradually returning to its normal course.”

But by mid-June, the virus came roaring back, fuelled by the virus’ delta variant, and Russia’s health system is struggling under a wave that many experts estimate is as bad and potentially even worse than this winter’s deadly one. Although there are signs now the wave is now easing in Moscow, it is continuing to batter much of the rest of the country where it arrived later.

“Compared with the second wave, it’s much tougher,” said Viktoria, an ambulance work in the Leningrad region, who asked to withhold her last name because she did not have permission to speak publicly. “The first wave was tough because no one knew anything what to do. And now it’s just on account of a very high infection rate.”

Since the start of July, Russia’s official coronavirus statistics have shown over 700 people dying most days, on many days breaking previous daily records from the winter.

That may be a significant undercount, many experts said. Throughout the pandemic Russia’s official COVID-19 statistics have been criticized for drastically underplaying its real virus numbers.

Calculations of so-called “excess deaths” from publicly available mortality data — considered internationally as the best way of assessing the pandemic’s true toll — show that Russia has recorded nearly 550,000 more deaths than in an average year between June 2021 and the start of the pandemic.

That is nearly four times higher than the official toll of 150,000, provided by Russia’s government coronavirus task force. It also does not take into account June and July, which have been the deadliest months of the third wave for the country.

[We] “are in the heart of a storm, which no one even tried to prevent,” Alexander Dragan, a data analyst who has tracked Russia’s pandemic statistics, wrote in a Medium post this month.

The wave of infections and deaths has hit as Russia had erected few defences to stem it. By June, authorities had lifted most of the limited restrictions that had been in place and spoke of an end to the pandemic in sight. Restaurants, bars and shops were working as usual, most workers had returned to offices, people were packing out events.

As the numbers surged in June, authorities in some regions scrambled to reimpose measures. In Moscow, where the mayor’s office has taken a more pro-active approach, companies were told to make some staff work from home and bars made to shut at 11 p.m. A small number of badly hit regions reimposed lockdowns.

But in most places restrictions have remained light and life is largely unaltered. In St. Petersburg, authorities in June allowed mass events, permitting thousands to throng during a city-wide graduation celebration and to attend Euros 2020 soccer matches. And in most regions, events involving hundreds of people are still permitted.

The result has been the virus — accelerated by the delta variant — has burned through Russia almost unrestricted.

The wave flooded hospitals in many regions from the start of June. In cities across Russia, local authorities warned they had run out of beds and were forced to open emergency reserve hospitals.

In St. Petersburg, medics told ABC News hospitals were packed with COVID patients since mid-June. Dmitry, a doctor at a hospital in the city said its 450 beds had been filled for the last month and that patients had to be kept in corridors, although the situation had improved in the last week.

The numbers were putting a huge strain on medical workers, he said, saying one medic was often having to look after 30 patients.

“It’s really a lot,” he said, also requesting anonymity because he was not permitted to comment publicly.

In Moscow and St. Petersburg the wave appears to be finally easing, with space appearing at last in hospitals. But in other regions where the wave arrived later, cases continue to climb. And the peak of deaths, which lag two to three weeks behind infections, in most places has still not arrived.

“We’re yet to see the peak of deaths. And I predict that July could be the worst month” so far, Raksha said.

Some doctors and experts blamed the scale of the third wave on the messaging from authorities that the pandemic was essentially over and abandoning restrictions.

“Russia is the country where COVID dissidents actually won,” Raksha said. “The result is hundreds of thousands (at least 200-300k) deaths above what could have happened otherwise,” he wrote in a message.

Russian officials had said they hoped to end the pandemic with vaccines developed by the country.

But the level of vaccination in Russia has stalled in mid-spring at around 14%, despite Russia having one of the world’s first COVID-19 vaccines, amid widespread reluctance among Russians to get the jab. Polls have showed around two-thirds of Russians do not intend to get vaccinated.

Experts have in part blamed that reluctance on authorities’ refusal to enforce tough restrictions and mixed messages suggesting that the situation in Russia was not so bad and underplaying the real number of deaths.

“Naturally, if people don’t believe that COVID is serious they have no motivation to get vaccinated,” Irina Yakutenko, a science journalist told the Russian news site, Bumaga.”Crudely speaking, the government did a lot so that so many people haven’t got the jab.”

As the third wave hit, authorities have launched a drive to try to overcome the vaccine hesitancy.

Moscow’s mayor made vaccination mandatory for people working in public-facing roles including restaurant workers, teachers, hairdressers and public transport staff — amounting to around 2 million people. A growing number of other regions followed suit, making Russia one of the few countries in the world to introduce large-scale mandatory vaccination.

In Moscow, authorities also announced unvaccinated people would not be able to access routine medical treatments at hospitals. For three weeks, a new rule required people to get a QR-code showing proof of vaccination or a negative PCR test to dine inside restaurants.

The push appears to have had an effect; the number of those vaccinated has climbed in the few weeks, according to official statistics and independent experts.

However, it’s not clear that pace will be kept up. Moscow has now backtracked over the rule requiring vaccination for indoor dining and the Kremlin has indicated it opposes broadening mandatory vaccination to the population at large. That puts in doubt whether Russia will reach a sufficient level of vaccination by the autumn to head off a deadly fourth wave.

Dmitry, the doctor in St. Petersburg said he did not have much hope a new wave would be avoided, even as the current wave eased.

“I think it’s a sort of calm before the storm,” he told ABC News.

He said both authorities and citizens needed to accept more restrictions to do so, alongside vaccination.

“In my view it’s better to cancel concerts for half a year than over the course of two years bury a large number of people,” he said.

Websites back up after brief global outage linked to Akamai

Thu Jul 22 , 2021
FILE PHOTO: FILE PHOTO: The logo for Amazon Web Services (AWS) is seen at the SIBOS banking and financial conference in Toronto, Ontario, Canada October 19, 2017. REUTERS/Chris Helgren/File Photo July 22, 2021 (Reuters) -Many websites were briefly down in an outage sparked by a glitch in Akamai Technologies Inc’s […] 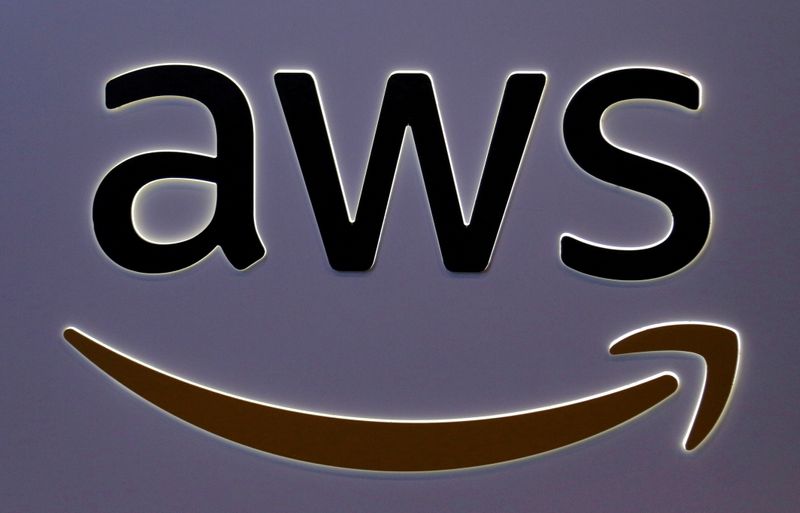