He’s all dressed up, and HE is Ru Paul, the master of a performance art with a very long history, as Nancy Giles now shows us. (This story was originally broadcast on Match 11, 2018.)

Since the ancient Greeks, men have been dressing in women’s clothing on stage. Men portrayed women in the plays of William Shakespeare; and many of us grew up watching Flip Wilson and Milton Berle on TV, or Tony Curtis and Jack Lemmon in the movie “Some Like It Hot.”

Drag — wearing clothing of the opposite sex — has come a long way.

“Now remember: if you can’t love yourself, how the hell are you gonna love somebody else?” said RuPaul. “Can I get an ‘A-men’ up here?”

“RuPaul’s Drag Race” is a top-rated TV game show, and just finished its 10th season with more than a million viewers each week. Contestants — yes, they’re all men — compete for prizes and the title “America’s Next Drag Superstar.”

At the center of it all: RuPaul, arguably the most successful drag performer of all time, and now the winner of three Outstanding Host Emmy Awards. Last week, the show also won the Emmy for Outstanding Reality Competition Program.

“I think ‘RuPaul’s Drag Race,’ at its core, is about the tenacity of the human spirit,” RuPaul told Giles.

“To watch a boy play with feminine things in a society that is so masculine, and come through it, and find their fire and their own voice, is a very powerful thing.”

It’s not just a TV show; fans line up at his pop-up store in Los Angeles to buy RuPaul merchandise.

One fan said, “He’s a great role model, for sure.”

Another fan said, “Even my family, who is from the conservative Midwest, has watched ‘RuPaul’s Drag Race’ and really loves it!”

And Thursday nights are “Drag Nights” at gay bars across the country. “They just happen; that’s the great part,” said Chris McCarthy, president of VH1. “It happens in every city all over the country, and in many places, the smaller the city, the bigger the party.”

Giles said, “I know there are probably people who don’t really dig what you do. What would you say to them?”

“What other people think of me is none of my business,” RuPaul replied. “But I also know that this show is for the kids out there who are looking for some type of guidance. These kids on our show have been through hell, literally. Their families have thrown them out of the house. They’ve been abused and beaten up. But they have come through and shined. That is the lesson right there.”

RuPaul Andre Charles was born in San Diego in 1960. Almost from the first, let’s just say he stood out in a crowd.

“People in my family, my mother and my father, basically ignored it,” he said. “It wasn’t something that they knew how to deal with. The kids in the neighborhood would say, ‘You’re a sissy.’ I’m like, ‘Oh, okay,’ you know? But because I am a sweetheart, no one ever really came for me in a really negative way.”

He says his parents’ marriage was not a good one. At age 15, RuPaul moved to Atlanta to live with his sister. And not long afterward, RuPaul Andre Charles became RuPaul.

“I was always looking for the way to fit onto this planet,” he said. “And I love to dress up. Through drag I was able to find who I really am. Period.”

He danced in bars and joined bands: “Drag was never about wanting to be like a woman. It was always about challenging identity values of society, and saying, ‘I am whatever I put on.'”

Michelle Visage, a long-time friend and a female judge on the show, said, “I think drag is an escape. It allows them to be somebody that maybe they aren’t in real life. And I tell parents that are religious, or don’t want to accept their gay child, that they don’t have to approve it; they just have to accept it. Their kids aren’t looking for their approval. Just accept them for who they are.”

RuPaul says he found acceptance when he moved to New York.

He appeared in the B-52s famous “Love Shack” video:

Then he was the guy … girl … in the super dance hit “Supermodel.”

A collector of vintage cars, he showed Giles his 1968 Mercedes 280SL.

Then, a few years ago, he met Georges Lebar, an Australian painter and rancher. They married last year.

And consider this: In 2017 Time magazine named RuPaul one of the most influential people in the world.

“I didn’t set out to do that, but I was smart enough to realize this is my calling,” he said. “You have to be open enough to hear the universe’s stage directions.”

Sun Sep 23 , 2018
People walk in the old town of St. Gallen, April 15, 2013. REUTERS/Michael Buholzer September 23, 2018 ZURICH (Reuters) – Voters in St. Gallen on Sunday approved by a two-thirds majority a ban on facial coverings such as the burqa, becoming the second Swiss canton to do so. Full-face coverings […] 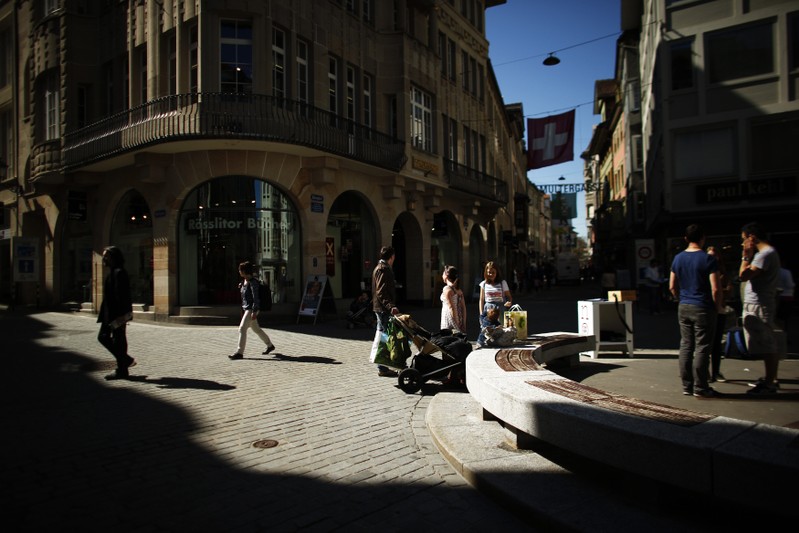