President Donald Trump has criticized the Justice Department for prosecuting the president’s longtime associate Roger Stone and recommending that Stone serve up to nine years in prison. That’s his opinion, but he falsely supports it by claiming Stone did “nothing” and “nobody even can define what he did.”

The Justice Department summed it up this way in November when the jury rendered its verdict: “Stone was found guilty of obstruction of a congressional investigation, five counts of making false statements to Congress, and tampering with a witness.”

All of the charges stemmed from Stone’s attempts to thwart the House intelligence committee’s investigation of Russian interference in the 2016 presidential election.

On Feb. 10, the Department of Justice recommended a sentence ranging from 87 months to 108 months, or roughly seven to nine years, saying “[o]bstructing such critical investigations … strikes at the very heart of our American democracy.” Trump objected on Twitter, and a day later the department filed an updated sentencing recommendation memo that left the decision up to the judge — resulting in four federal prosecutors to withdrawing from the case.

Trump praised Attorney General William Barr in a Feb. 12 tweet “for taking charge of a case that was totally out of control and perhaps should not have even been brought.” (Barr later said Trump’s tweets are making it “impossible for me to do my job.”)

Trump made numerous remarks to reporters and on Twitter about Stone’s case, saying his friend was treated “very badly” by prosecutors. When asked if he is considering pardoning Stone, who is due to be sentenced Feb. 20, Trump responded:

Trump, Feb. 12: I don’t want to say that yet. But I tell you what: People were hurt viciously and badly by these corrupt people.

And I want to thank — if you look at what happened, I want to thank the Justice Department for seeing this horrible thing. And I didn’t speak to them, by the way, just so you understand. They saw the horribleness of a nine-year sentence for doing nothing. You have murderers and drugs addicts; they don’t get nine years.  Nine years for doing something that nobody even can define what he did.

But federal prosecutors, beginning with special counsel Robert Mueller, clearly defined what Stone did and how it interfered with the investigation of Russia’s election interference.

Mueller concluded in a March 2019 report that “[t]he Russian government interfered in the 2016 presidential election in sweeping and systematic fashion” to help Trump win the election. The Russians did this in two ways:

The federal investigation uncovered a sophisticated hacking operation by a unit responsible for intelligence collection for the Russian military. The Main Intelligence Directorate, or GRU, “hacked the computers and email accounts of organizations, employees, and volunteers supporting the Clinton Campaign,” the Mueller report said. Among other things, the GRU gained access to more than 30 computers on the Democratic National Committee network and “stole hundreds of thousands of documents from the compromised email accounts and networks,” the report says.

The GRU then publicly released the stolen emails and documents “through two fictitious online personas that it created — DCLeaks and Guccifer 2.0 — and later through the organization WikiLeaks,” the report said.

According to the Mueller report, “The release of the documents was designed and timed to interfere with the 2016 U.S. presidential election and undermine the Clinton Campaign.” The Trump campaign also took political advantage of the hacked material.

“According to [Deputy Campaign Chairman Rick] Gates, by the late summer of 2016, the Trump Campaign was planning a press strategy, a communications campaign, and messaging based on the possible release of Clinton emails by WikiLeaks,” the report said.

At Stone’s trial, Gates testified that in April 2016 Stone privately told him that “WikiLeaks would be submitting or dropping information” that could help the Trump campaign. That was about three months before WikiLeaks released nearly 20,000 DNC emails — the first of document dumps that eventually exceeded more than 44,000 emails and 17,000 attachments, as WikiLeaks says on its website.

Steve Bannon, Trump’s former campaign manager, testified during the trial that the campaign saw Stone as its potential “access point” to WikiLeaks.

On Oct. 3, 2016, Stone tweeted, “I have total confidence that @wikileaks and my hero Julian Assange will educate the American people soon #LockHerUp.” Assange is WikiLeaks’ founder. That same day, Matthew Boyle, the Washington editor of Breitbart, sent Stone a text message that said, “Assange — what’s he got? Hope it’s good.” Stone replied, “It is. I’d tell Bannon but he doesn’t call me back.” Four days later, WikiLeaks released a batch of emails belonging to Clinton Campaign Chairman John Podesta.

At the time of the congressional investigation, the House intelligence committee, among other things, was trying to determine whether Stone had insider knowledge of WikiLeaks’ release of the emails and documents.

According to the Feb. 10 sentencing memo, Stone made at least five public statements from Aug. 8, 2016, to Aug. 18, 2016, that indicated he had a source connected to Assange. The committee asked Stone to name the person he was referring to in those early- to mid-August statements. Stone told the House committee it was radio host Randy Credico, who had interviewed Assange on Aug. 25, 2016.

But that was a lie, according to the evidence prosecutors presented at the trial, including Credico’s testimony.

“Stone and Credico did not even discuss Assange until August 19, 2016, when Credico told Stone that he was trying to book Assange on his radio show,” the Feb. 10 sentencing memo says.

Stone was actually referring to Jerome Corsi, a conservative author. “[T]he intermediary or backchannel that Stone referenced in his August 2016 public statements was Corsi,” the memo says.

On Aug. 2, 2016, Corsi told Stone in an email that WikiLeaks planned to release “very damaging” information about Clinton.

“Word is friend in embassy plans 2 more dumps. One shortly after I’m back. 2nd in Oct. Impact planned to be very damaging.… Time to let more than [the Clinton Campaign chairman] to be exposed as in bed w enemy if they are not ready to drop HRC [Hillary Rodham Clinton],” Corsi wrote in that email. “That appears to be the game hackers are now about.”

It was after exchanging this and other emails with Corsi in late July and early August that Stone began making “a series of public statements that he was in contact with Assange, and that he knew what information Assange was planning to release.”

Stone, for example, told an audience at an Aug. 8, 2016, event held by the Southwest Broward Republican Organization that he had “communicated with Assange.” Stone told the group, “I believe the next tranche of his documents pertain to the Clinton Foundation but there’s no telling what the October surprise may be.”

Prosecutors also presented evidence that showed how Stone threatened and bullied Credico in an attempt to prevent him from testifying before the House committee and contradicting Stone’s earlier committee testimony. Credico testified that Stone threatened him and used references to the “Godfather” movies to pressure him not to talk to Congress, according to Politico’s account of the trial.

Politico, Nov. 12, 2019: In another exchange, Credico warned Stone that he could be prosecuted for perjury for giving incorrect testimony to lawmakers. Stone replied with several threats directed at Credico and his therapy dog, Bianca.

“I’m going to take that dog away from you. Not a fucking thing you can do about it either because you are a weak piece of shit,” he wrote in one. And in another, Stone said, “Let’s get it on. Prepare to die cocksucker.”

Stone’s threats, which were successful, ultimately resulted in his witness tampering conviction.

Stone “engaged in witness tampering by urging Credico either to corroborate this false account, or to tell the Committee that he could not remember the relevant events, or to invoke his Fifth Amendment right against self-incrimination to avoid testifying before the Committee,” the Justice Department said in a press release after Stone’s conviction. “Credico ultimately invoked his Fifth Amendment right in response to a Committee subpoena.”

“In fact, Stone exchanged numerous text messages and emails about WikiLeaks with both Corsi (the actual intermediary) and Credico (the person Stone falsely identified as his intermediary),” the memo says.

As a result of Stone’s false statements, the committee did not subpoena any documents from him — which had a “significant impact” not only on the committee’s investigation but the federal criminal investigation.

“When the FBI began investigating Stone’s conduct in 2018, the text messages between Stone and Credico from November 2016 to November 2017, which the Committee surely would have subpoenaed if Stone had told the truth about their existence, were gone,” the sentencing memo says.

Stone also lied when he told the House committee that he “did not ask the intermediary to do anything on Stone’s behalf,” the memo says. “In fact, as early as July 2016, Stone told Corsi to ‘get to Assange’ and ‘get the pending wikileaks emails.’”

Stone also lied when he said “he had never discussed his conversations with the person he referred to as his … ‘intermediary’ with anyone involved in the Trump Campaign,” the Feb. 10 sentencing memo says. “In fact, Stone had conversations with Gates, Bannon, and Trump campaign Chairman Paul Manafort about information that he had received from Corsi and Credico.” Also, federal prosecutors submitted Stone’s phone records that showed more than 150 calls with Manafort, more than 120 with Gates and 60 with Trump, as Politico reported.

In initially presenting their case for Stone to serve up to nine years in prison, the federal prosecutors said his “obstructive conduct” was “a direct and brazen attack on the rule of law.”

“Stone was not compelled to testify falsely before Congress. He could have told the truth, or he could have declined the invitation to testify altogether,” the memo says. “Instead, Stone chose another option: he lied to Congress and then he tampered with a witness who could expose those lies. Stone’s goal, at the outset, was to obstruct the Committee’s search for the truth.”

Title 18, Section 1505 makes it illegal if anyone “willfully withholds” any documents or “misrepresents” any answers in testimony before any investigation “by either House, or any committee of either House.” This carries a penalty of not more than five years.

Title 18, Section 1001 (a)(2) makes it a crime to make “any materially false, fictitious, or fraudulent statement or representation” to Congress or any other branch of the federal government. This also carries a penalty of up to five years.

Title 18, Section 1512(b)(1) makes it illegal to “influence, delay, or prevent the testimony of any person in an official proceeding.” Witness tampering is the most serious of the charges, carrying a penalty of no more than 20 years.

In the Feb. 10 sentencing memo, under the heading of “The Seriousness of the Offense,” the prosecutors quote the Federalist Papers on the danger of foreign interference in U.S. elections.

“Foreign election interference is the ‘most deadly adversar[y] of republican government.’ Federalist Papers No. 68 (Hamilton),” the memo says. “Investigations into election interference concern our national security, the integrity of our democratic processes, and the enforcement of our nation’s criminal laws. These are issues of paramount concern to every citizen of the United States. Obstructing such critical investigations thus strikes at the very heart of our American democracy.”

Fri Feb 14 , 2020
A Boeing 737 MAX 9 is pictured outside the factory in Renton, Washington. Stephen Brashear | Getty Images After weeks of assessing concerns about the placement of wiring bundles in 737 Max airplanes, Boeing has submitted its initial recommendation to the FAA for how to resolve the issue. Sources say […] 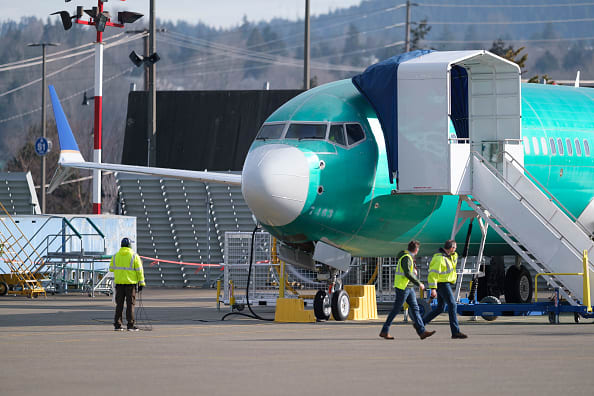