Nobel-prize winning economist Robert Shiller believes a recession may be years away due to a bullish Trump effect in the market.

According to the Yale University professor, President Donald Trump is creating an environment that’s conducive to strong consumer spending, and it’s a major force that should hold off a recession.

“Consumers are hanging in there. You might wonder why that would be at this time so late into the cycle. This is the longest expansion ever. Now, you can say the expansion was partly [President Barack] Obama,” he told CNBC’s “Trading Nation” on Friday. “But lingering on this long needs an explanation.”

Shiller, a behavioral finance expert who’s out with the new book “Narrative Economics,” believes Americans are still opening their wallets wide based on what President Trump exemplifies: Consumption.

“I think that [strong spending] has to do with the inspiration for many people provided by our motivational speaker president who models luxurious living,” said Shiller.

Before the markets can take-off, Shiller stresses President Trump needs to get past the impeachment inquiry. He sees this as the biggest threat to his optimistic forecast.

“If he survives that, he might contribute for some time in boosting the market,” said Shiller. “We’re maybe in the Trump era, and I think that Donald Trump by inspiration had an effect on the market — not just tax cutting.”

Despite Shiller’s optimistic stance, he cautions not everything is rosy in the economy. His Shiller PE Ratio, also known as CAPE, tracks the price-to-earnings ratio based on average inflation-adjusted earnings over the last 10 years. He cautions it’s still at a concerning level.

“I’m not saying that I’m so bullish because I have a CAPE ratio that is bearish,” said Shiller, who predicted on “Trading Nation” last March there was a 50% chance the economy would tip into a recession within 18 months.

Yet, he’s sticking with the idea that the economy and markets should have a lot of runway left for gains if President Trump remains in office due to his pro-spending, pro-business narrative.

Shiller contends the next recession may not hit for another three years, and it could be mild.

“Let’s not make the mistake of assuming it’s right around the corner,” Shiller said. “If the economy is strong, which is what he built is case on, ‘make America great again,’ he has a good chance of getting re-elected.”

The inside scoop on 2 original Sanders surrogates: Ben & Jerry

Sun Oct 20 , 2019
Before political reporters scribbled explainers on “democratic socialism,” and Twitter fueled the Washington zeitgeist, Vermont Mayor Bernie Sanders had two men in his corner: Ben Cohen and Jerry Greenfield. Most Americans have never seen them, but they know them: Ben & Jerry ice cream pints have lined freezer aisles in […] 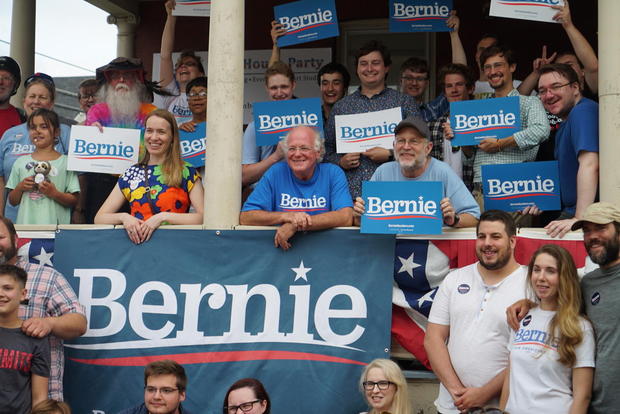