An independent investigation into the death of 23-year-old Elijah McClain after an August 2019 arrest by Aurora, Colorado officers describes how the arrest was mishandled and recommends the city reassess its use of force policies and overhaul its internal review process.

The investigative panel wasn’t tasked with concluding whether the officers committed crimes or violated policies, but rather to investigate the actions of officers and fire rescue personnel, create a timeline of events and develop a written report with recommendations. It released the157-page report on Monday ahead of a presentation by the investigative team expected during a special City Council session Monday night, reports CBS Denver.

McClain, who was Black, had been walking home from a convenience store wearing a ski mask when someone called 911 to report a suspicious person. Arriving officers tried to arrest the unarmed man, using a carotid hold — a technique where pressure is placed on both sides of the neck — and tackling him to the ground.  Aurora Fire Department personnel later injected him with the sedative ketamine. He suffered a heart attack and was later removed from life support.

The report released  Monday found responding officers acted very quickly to take McClain into custody — an officer placed his hands on McClain within 10 seconds of exiting his patrol car — and apparently failed to assess whether there was reasonable suspicion to believe that a crime had occurred.

The report found that some level of force or threat of force was used “nearly constantly” against McClain in the 18 minutes that passed from the time police first approached him until he was placed on a gurney to be transported to the hospital. The force included an attempted and successful carotid hold and various “pain compliance” techniques such as arm bars, wrist locks, and officers applying their knees to McClain’s muscles, the report says. The officers justified the use of force by saying McClain resisted and showed extraordinary strength, but bodycam audio portrayed a starkly different scenario, the report said.

“The audio captured by the body worn camera contains two sharply contrasting narratives — on the one hand, Mr. McClain pleading, apologizing,  and expressing pain, and on the other hand, the officers continuing to perceive resistance,” the report found.

McClain can be heard gagging and vomiting, and at times saying he couldn’t breathe. At one point an officer was told to “get off his chest,” according to the report.

“It is unclear whether Mr. McClain’s movements, interpreted by the officers as resisting, were attempts to escape or simply efforts, voluntary or involuntary, to avoid the painful force being applied on him, to improve his breathing, or to accommodate his need to vomit,” the report said.

The report found the use of force didn’t relent even after McClain was in handcuffs and becoming “progressively more ill and less responsive.” The panel found that the department’s major crimes unit didn’t properly investigate the continued use of force after McClain was handcuffed, including continued pain compliance techniques “in response to almost any movement.”

“The officers were still discussing maintaining pressure holds right up until Mr. McClain was injected with ketamine — and even though he did not appear to be moving at that time,” the report found.

Paramedics who responded didn’t immediately provide care to McClain and accepted officers’ suggestion that he was experiencing “excited delirium” without evaluating him, the report found. Paramedics also overestimated McClain’s weight before administering the ketamine, affecting the weight-based calculation for dosage, the report found.

The report notes that use of force best practices require officers to continuously re-evaluate their use of force from moment to moment to determine whether the force is still proportional to the situation. It found the officers “did not appear to re-evaluate the threat as circumstances changed, but instead continued to use force justified by circumstances that had since been addressed.”

The report also notes that Aurora police policy authorizes officers to use “only reasonable and appropriate force, and only when legally justified.”

“When practicable officers will attempt to de-escalate their use of force and/or the situation so that lesser force, or possibly no force, is required,” the department’s policy reads, according to the report.

The Aurora Police Department’s major crimes unit, which reviewed the officer’s use of force, conducted interviews that were “neither probing nor thorough as would be expected in the case of an in-custody death.” The report called the investigation “flawed.”

“The post-incident review of the death of Mr. McClain is of serious concern to the panel and revealed significant weaknesses in the department’s accountability systems,” the report found.

The investigation was commissioned by the Aurora City Council in July 2020 and was led by Jonathan Smith, executive director of the Washington Lawyers’ Committee for Civil Rights and Urban Affairs.

The three officers involved in McClain’s death were removed from patrol duty in June 2020. They have not been charged, but one, Jason Rosenblatt, was later fired when he texted “haha” in response to a photo of other officers mimicking the chokehold used on McClain.

The Colorado Attorney General’s Office has opened a grand jury investigation into McClain’s death and the the U.S. Department of Justice is reviewing whether McClain’s civil rights were violated.

Mon Feb 22 , 2021
President Biden’s nominee for attorney general, Judge Merrick Garland, says pursuing equal justice for all and “battling extremist attacks on our democratic institutions” will be among his priorities if confirmed for the job. Watch his opening statement from his Senate confirmation hearing. Free America Network Articles 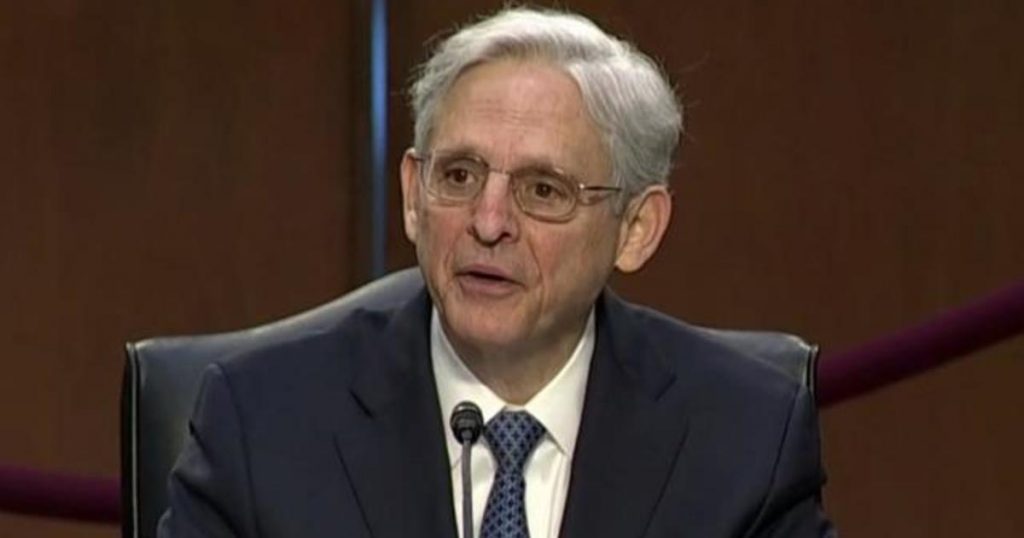