RALEIGH, N.C. – – The Boston Bruins didn’t have the offensive answers in Game 3 as they did in previous games of the Eastern Conference finals.

They still had Tuukka Rask in nets.

That proved to be the difference on Tuesday night as Rask stopped 35 shots in a 2-1 victory against the Carolina Hurricanes that gave the Bruins a commanding 3-0 lead in the best-of-seven series.

“He’s the backbone of the team,” Bruins center Patrice Bergeron said of Rask. “We can count on him. … Even when things aren’t great, he calms everybody down.”

Chris Wagner and Brad Marchand scored about five minutes apart in the second period for the Bruins.

The Hurricanes, who entered the night with a 5-0 home record in the postseason, must win Game 4 at home on Thursday night in order to extend the series.

Carolina did about everything except break through against Rask at times.

Boston posted 5-2 and 6-2 victories to begin the series. This game had a different tone.

There was so much chatter about the offensive sources after the first two games that there wasn’t a lot of talk about Rask. Now, he has stopped 85 of 90 shots in the series.

“That guy was pretty special down at the other end,” Hurricanes coach Rod Brind’Amour said.

The Bruins had the right mindset to withstand Carolina’s energy.

“We’re very fortunate to have those guys in the room,” Boston coach Bruce Cassidy said. “There’s a sense of calm there, yet urgency if that makes sense.”

Carolina turned to goalie Curtis McElhinney for his first action of the series. He had filled in for an injured Petr Mrazek for the final two-plus games of the second-round sweep of the New York Islanders.

McElhinny, who made 29 saves, was out of the net for the final two minutes, but the Hurricanes couldn’t deliver a tying goal.

“We’re not going away quietly,” he said.

While the Hurricanes lost the first two games in the first round to the Washington Capitals, this time the hole is deeper.

“We’ve been kind of the underdog so many times this year,” Carolina defenseman Brett Pesce said. “That doesn’t change, and we know what we’re capable of and we have a lot more to give.”

With 15:44 remaining the third period, Boston appeared to have increased the lead to 3-1 when the puck bounced off bodies and into the net. However, Boston’s Jake DeBrusk was called for goalie interference for making contact with McElhinney, wiping out the goal.

Wagner opened the scoring with a goal 1:21 into the second period, knocking in the puck from close to the crease.

Then Marchand produced his sixth goal of the postseason, this one coming on a power play at 6:28. The tally came with a fortunate redirection for the Bruins, with the puck hitting off the glove of de Haan and bouncing through McElhinney’s legs.

It was Boston’s third power-play chance of the game. The Bruins wound up 1-for-5 with the man advantage while the Hurricanes were 0-for-5.

De Haan got one back with his first career playoff goal at 13:48 of the middle period.

The Hurricanes came out with a flurry, peppering Rask with shots. He stopped 19 shots in the first 18 minutes of the scoreless first period.

The period ended with Carolina holding a 20-6 edge in shots. That was the most shots in a period for the Hurricanes in a playoff game this year.

The Bruins reversed that in the second period by registering an 18-6 advantage in shots.

Carolina forward Saku Maenalanen was back in the lineup after missing four games due to a hand injury. He replaced Jordan Martinook, who is considered one of the team leaders but has labored with injuries during the postseason.

Wed May 15 , 2019
“CBS This Morning” is starting a “new chapter” with new co-hosts Anthony Mason and Tony Dokoupil joining Gayle King at the table, but longtime viewers like Stephen Colbert don’t have to worry: “It’s still going to be the same show,” King said. The new co-hosts joined Colbert on “The Late […] 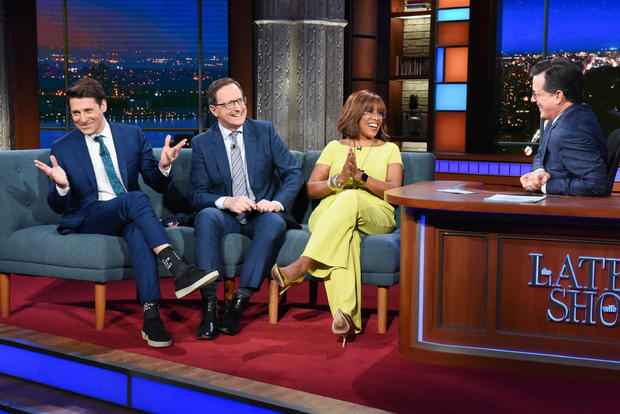