UMM AL HAWAYA, Qatar (Reuters) – Deep in the Qatari desert, a herd of cows stands in a vast shed, cooled by fans and jets of mist – each animal a key player in a plan to defy a trade boycott and make the kingdom self-sufficient in milk by next year.

The black and white Holstein cattle are among the first members of a 14,000-strong herd that farming company Baladna is expecting to build up in coming months, its chief executive John Dore told Reuters in an interview.

“We will make Qatar self-sufficient by June – that is the target,” Dore said.

But technology and the deep pockets of Baladna’s Qatari owners were compensating for the harsh environment, said Dore, an Irishman who previously worked for Saudi Arabian dairy giant Almarai.

Hundreds of cows were already hooked up to the automatic milking machines at Baladna’s farm in Umm al Hawaya, about 50 km (30 miles) north of Doha, and producing milk good enough to export, he said. More than 6,000 more cows from the United States are due to arrive by February.

Qatar’s drive to build a dairy industry in the desert illustrates how the tiny but wealthy country, the world’s biggest exporter of liquefied natural gas, is using money and technology to cope with its isolation.

Saudi Arabia, the United Arab Emirates, Bahrain and Egypt cut trade and transport ties with Qatar in June, accusing it of backing terrorism, a charge which Doha denies.

The boycott disrupted Qatar’s shipping routes through the Gulf. It also shut Qatar’s land border with Saudi Arabia, across which many perishable goods were imported, including almost 400 tonnes of fresh milk and yoghurt a day.

The boycott has forced Qatar to fly in dairy products from Turkey and Iran. But Dore said the country was determined to create its own dairy sector, largely relying on Baladna, a private company which is receiving logistical and other support from the government.

The firm, which raises sheep, was considering moving into milk production before the boycott, but knew it would find it hard to compete on price with imports from Almarai, he said.

The boycott removed that competition and in the initial weeks of the diplomatic crisis, the company flew in the first 3,400 cows on state-owned airline Qatar Airways.

“We were milking cows here on the 11th of July, which is barely a month after the blockade, and that by any method or means is some achievement,” Dore said.

Baladna is planning two more sea shipments from the United States – each holding 3,300 animals – by February. Another consignment of 3,000 cows has been planned, but not yet ordered.

By June, it says it is expecting to raise production of fresh milk and yoghurt to 500 tonnes a day, enough to meet domestic demand with 100 tonnes left over for export.

Baladna has not disclosed financial details of its project, and it is not yet clear whether Qatar can produce large volumes of milk economically, let alone export some at competitive prices.

But for now at least, the country’s drive to reduce its dependence on imports with domestic production appears to be stimulating the economy. The manufacturing sector grew 3.2 percent from a year earlier in September, official data released last week showed. Food manufacturing jumped 23.5 percent.

Wed Nov 29 , 2017
Bitcoin (virtual currency) coins placed on Dollar banknotes are seen in this illustration picture, November 6, 2017. REUTERS/Dado Ruvic/Illustration November 29, 2017 By Jemima Kelly and Gertrude Chavez-Dreyfuss LONDON/NEW YORK (Reuters) – Bitcoin zoomed past $11,000 to hit a record high for the sixth day in a row on Wednesday […] 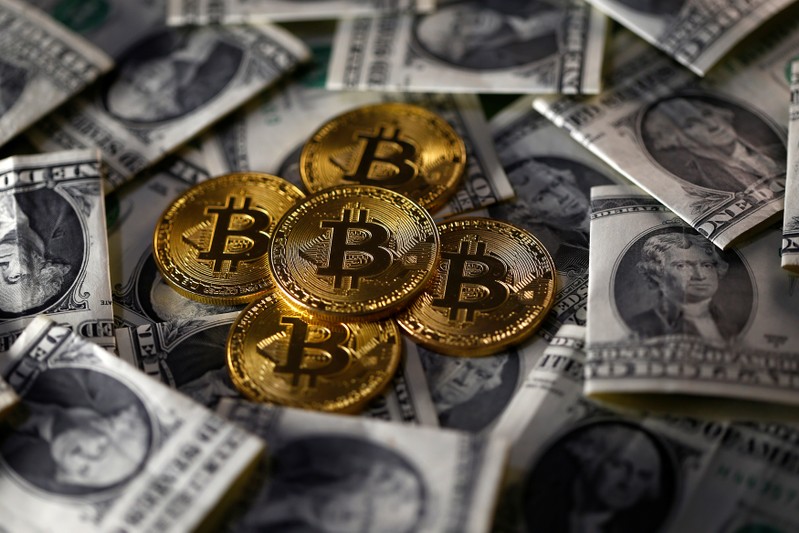