On Christmas Eve in Italy, church bells rang earlier than usual. The Italian government’s 10 p.m. curfew prompted pastors to move up services, with “Midnight” Mass starting Thursday evening in some churches as early as a couple hours after dark.

Pope Francis, who has said people “must obey” civil authorities’ measures to fight the spread of COVID-19, fell in line. This year, the Christmas vigil Mass in St. Peter’s Basilica was moved up from 9:30 p.m. to 7:30 p.m.

Normally, seats at the vigil Mass are quickly snapped up by Romans and tourists, but the pandemic has reduced tourists in Italy to a trickle. In keeping with social distancing measures, barely 200 faithful — instead of several thousand — spaced out in the basilica’s pews and wearing masks, attended Francis’ celebration of the Mass. A row of fiery red poinsettia plants warmly contrasted with the sumptuous cold marble of the basilica.

Francis in his homily offered reflections on Christmas’ significance. “We often hear it said that the greatest joy in life is the birth of a child. It is something extraordinary and it changes everything,” he said. A child “makes us feel loved but can also teach us how to love.”

“God was born a child in order to encourage us to care for others,” said Francis, who has made attention to the poor and unjustly treated a key theme of his papacy.

Celebrations elsewhere in Europe were canceled or greatly scaled back as coronavirus infections surge across the continent and a new variant that may be more contagious has been detected.

Meanwhile, Bethlehem on Thursday ushered in Christmas Eve with a stream of joyous marching bands and the triumphant arrival of the top Catholic clergyman in the Holy Land, but few people were there to greet them as the coronavirus pandemic and a strict lockdown dampened celebrations in the traditional birthplace of Jesus.

Similar subdued scenes were repeated across the world as the festive family gatherings and packed prayers that typically mark the holiday were scaled back or canceled altogether.

Italians lined up at bakeries, fish markets and grocery stores for items needed to prepare Christmas Eve dinners, even as government officials begged families to limit their “cenone” gatherings to no more than two people outside the main family unit. The government this week barred travel between regions, and police were out Thursday enforcing the restrictions.

In Athens, Christmas Eve was eerily silent. In normal times, voices of children singing carols while tinkling metal triangles can be heard all day. The decades-old custom, in which children go house to house and receive small gifts, was banned this year. Groups of children managed to honor the tradition by singing to Prime Minister Kyriakos Mitsotakis by video link.

Throughout the pandemic, one of the hardest-hit churches in New York City has been Saint Peter’s Lutheran Church in Manhattan. Church leaders say more than 60 members of the congregation — which numbered about 800 before the pandemic — have died of COVID-19, almost all of them part of the community of some 400 who attended services in Spanish.

Despite their own heartbreaks, congregation members — many of them immigrants — donated coats, scarves and other winter clothes for more than 100 migrant minors at a detention center in Manhattan.

While many other New York City churches have resumed in-person services, Saint Peter’s continues to offer its Masses only online. The schedule for Christmas Eve and Christmas day included Masses in English and Spanish, and a bilingual jazz vespers service.

In Bethlehem, officials tried to make the most out of a bad situation.

“Christmas is a holiday that renews hope in the souls,” said Mayor Anton Salman. “Despite all the obstacles and challenges due to corona and due to the lack of tourism, the city of Bethlehem is still looking forward to the future with optimism.”

“Despite the restrictions and limitations we want to celebrate as much as possible, with family, community and joy,” said Pizzaballa, who was to lead a small Midnight Mass gathering later in the evening. “We want to offer hope.”

Thousands of foreign pilgrims usually flock to Bethlehem for the celebrations. But the closure of Israel’s international airport to foreign tourists, along with Palestinian restrictions banning intercity travel in the areas they administer in the Israeli-occupied West Bank, kept visitors away.

The restrictions limited attendance to residents and a small entourage of religious officials. Evening celebrations, when pilgrims normally congregate around the Christmas tree, were canceled, and Midnight Mass was limited to clergy.

The coronavirus has dealt a heavy blow to Bethlehem’s tourism sector, the lifeblood of the local economy. Restaurants, hotels and gift shops have been shuttered.

It was not the usual raucous Christmas eve in Mexico City. The big celebration was a ceremony where the country’s first coronavirus vaccine shots were administered.

On Christmas Eve, parents usually take their kids to a downtown plaza where actors dress up as the Three Wise Men or Santa Claus and pose in front of elaborate backdrops resembling the sets of popular children’s movies.

But this year, the Wise Men and Santas were banned. Mexico’s other grand tradition, Midnight Mass, was canceled in many parishes.

Still, Zoé Robledo, director of Mexico’s social security system, said the start of the country’s COVID-19 vaccine program made it “an unforgettable Christmas.”

Thomas Azevedo and his 9-year-old son braved the bad weather to set up a small stand, selling beer and caipirinhas made from fresh fruit. By early afternoon, he hadn’t sold a thing.

“It’s not so much the rain; in previous years it was full of tourists at Christmas. This year there’s no one,” said Azevedo, 28.

Australians had until recently been looking forward to a relatively COVID-19-free Christmas after travel restrictions across state borders relaxed in recent weeks in the absence of any evidence of community transmission. But after new cases were detected over the past week, states again closed their borders.

While many places around the globe were keeping or increasing restrictions for Christmas, Lebanon was an exception. With its economy in tatters and parts of its capital destroyed by a massive August 4 port explosion, Lebanon has lifted most virus measures ahead of the holidays, hoping to encourage spending. Tens of thousands of Lebanese expatriates have arrived home for the holidays, leading to fears of an inevitable surge in cases during the festive season.

Lebanon has the largest percentage of Christians in the Middle East — about a third of its 5 million people — and traditionally celebrates Christmas with much fanfare.

“People around us were tired, depressed and depleted, so we said let’s just plant a drop of joy and love,” said Sevine Ariss, one of the organizers of a Christmas fair along the seaside road where the explosion caused the most damage.

Thu Dec 24 , 2020
body .breaking-news[target-url*=”/video/pope-francis-blesses-followers-at-christmas-eve-mass/”] { display: none; } Watch CBSN Live Due to the coronavirus pandemic, Christmas Eve Mass at the Vatican was held earlier than usual to comply with a curfew. Pope Francis offered a blessing to the socially-distanced congregants at St. Peter’s Basilica. Copyright © 2020 CBS Interactive Inc. All […] 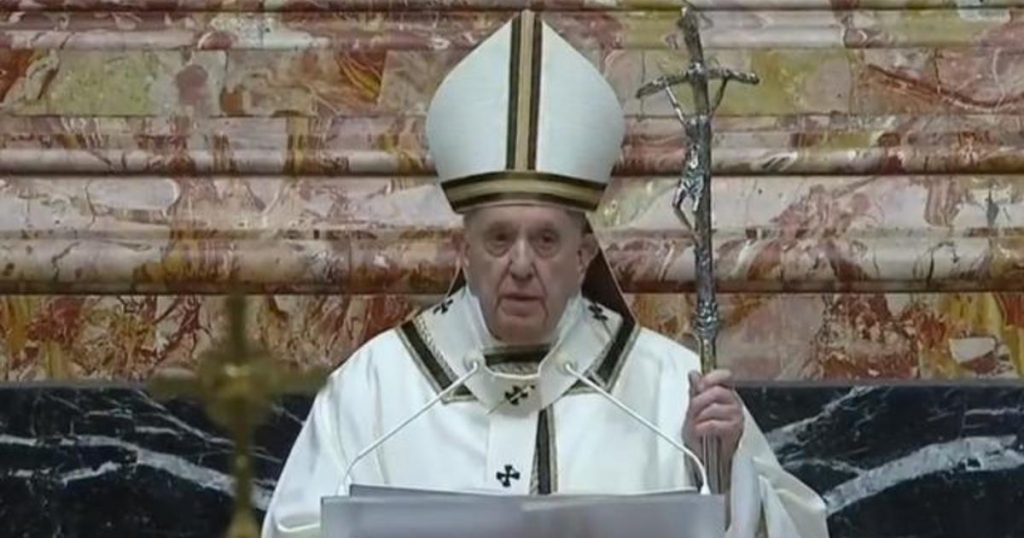