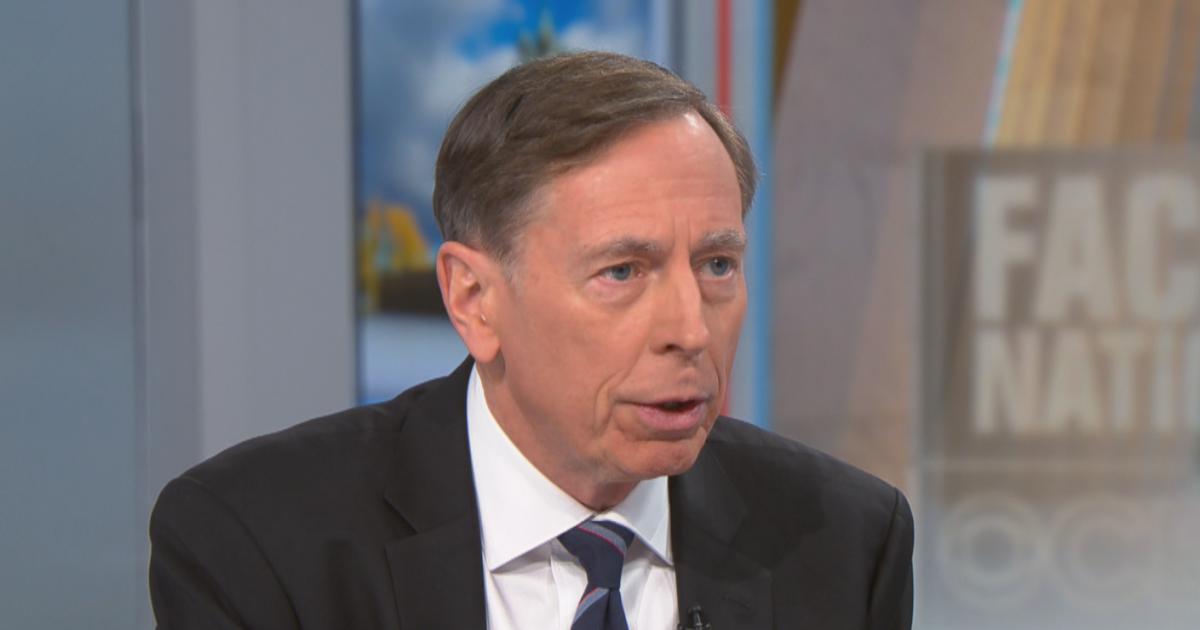 The way the U.S. handled its withdrawal from Afghanistan has done damage to the United States’ credibility and reputation abroad, said David Petraeus, former head of the CIA and former commander of U.S. Central Command.

Petraeus, who argued that the U.S. should keep a military presence in Afghanistan, pointed to criticism from the British government and other major European leaders in the wake of the collapse of the Afghan government and Taliban takeover of a country where the U.S. spent two decades.

“There is damage to our credibility and to our reputation,” he said in an interview with CBS News chief Washington correspondent Major Garrett for “The Takeout” podcast.

The Biden administration recognizes that, and will need to work very hard to craft a “whole-of-governments” approach to the world and to China as it so “skillfully” did in the first seven months of the administration, Petraeus said.

“And again, that was very very impressively carried out, but clearly now there will be some damage, in a way and they’ll have to work extra hard to do that,” he said. “And it will be done, as always, with deeds not just with words. Words will be needed but people will really be watching for the deeds.”

The wartime general didn’t have a yes or no response to whether the U.S. lost the war in Afghanistan after 20 years.

“Well we certainly didn’t achieve the outcome that many of us, if not most of us, perhaps, had hoped for,” he said.

Patraeus lamented the “heartbreaking development” of the Taliban takeover of a country from a government that, however imperfect, was democratically elected and enhanced freedoms. And while he praised the heroism of the thousands of service members who successfully airlifted thousands of Afghans, Americans and third-party nationals, he acknowledged the U.S. exit scene was chaotic.

“I don’t know how you can look at what transpired and say that that was a smooth, well planned operation,” Petraeus said.

Still, the missteps in Afghanistan stretched back years, he suggested. The U.S. too quickly shifted its focus from Afghanistan when it went into Iraq in 2003. He recalled being shocked after a tour in Iraq when he headed to Afghanistan and saw how little progress had been made there, comparatively.

But, in present day, in his mind, the better solution was to not withdraw from Afghanistan at all. The U.S. footprint was sustainable, and in recent years, the U.S. has lost more troops in training fields than battlefields, he said. Petraeus noted partner nations had more than twice as many troops in Afghanistan as did the U.S.

But once the president made the decision to withdraw, other decisions could have mitigated the impact, he said.

Petraeus said the U.S. pulled out of Afghanistan during the Taliban fighting season, when it could have done so in winter instead, when inclement weather would have slowed the Taliban down. He also faulted the painfully slow process for approving special immigrant visas.

Taking a step back and looking at the 20-year war in Afghanistan, did the U.S. win hearts and minds? “Well, it’s a mix,” Petraeus said.

The former CIA head said he’s asked often whether the U.S. is safer now than before the September 11, 2001, attacks, the anniversary of which will be Saturday.

“The answer to that, I’m pretty confident, is yes,” he said.

Petraeus also took questions on news of the day, including the Biden White House request that many Trump-era appointees to military service academies step down. There were some highly qualified appointees, like Lieutenant General H.R. McMaster, Petraeus said.

“But there were a number of individuals on those boards who really had no expertise in the institutions that they were reviewing,” he added.

Petraeus, a military man steeped in Civil War history, also opined on former President Trump’s lamentation over the removal of a statue of General Robert E. Lee. The ex-president said that, “if only we had Robert E. Lee to command our troops in Afghanistan, that disaster would have ended in a complete and total victory many years ago.” Lee’s army, of course, lost the Civil War.

Petraeus, who says the most influential book for him is Ulysses S. Grant biography “Grant Takes Command,” disagreed that Lee’s strategy was so superior. Lee, he said, pursued the wrong strategies.

“I think it’s occasionally important to remember that Robert E. Lee, for all of the qualities and attributes that he is celebrated, lost,” Petraeus said.

Fri Sep 10 , 2021
COPENHAGEN, Denmark — After 548 days with restrictions to limit the spread of COVID-19, Denmark’s high vaccination rate has enabled the Scandinavian country to become one of the first European Union nations to lift all domestic restrictions. The return to normality has been gradual, but as of Friday, the digital […]