A member of a forensic team walks in the area during the exhumation of the remains of victims of the 1989 U.S. invasion at the Monte Esperanza cemetery, in Colon, Panama October 14, 2021. REUTERS/Erick Marciscano

PANAMA CITY (Reuters) – Several bags with human remains have been exhumed from a mass grave in Panama amid searches for the victims of the U.S. invasion of Panama in 1989, officials said on Thursday.

The military operation took the lives of some 300 civilians and marked the end of the dictatorship of General Manuel Noriega. For years, families have called for a search for the remains of those who died, many of whom were buried in mass graves.

Attorney General Geomara Guerra said four bags of remains have been recovered so far at the Monte Esperanza cemetery in the city of Colon.

“We plan to keep doing the work to dig in the earth and see how many more bags could be there,” he told reporters.

The remains were discovered in the same bags that U.S. soldiers distributed for burials, he added.

Officials last year began exhuming corpses at another cemetery, called Jardin de Paz, https://www.reuters.com/article/uk-panama-usa-idUKKBN23S0HN and found the unidentified remains of about 30 people. They halted the effort due to coronavirus restrictions.

Human rights organizations have long estimated the true number of Panamanian victims could be higher than the official toll of 300, prompting former President Juan Carlos Varela to establish a commission to investigate the true number.

Only 23 American soldiers lost their lives in the assault.

The invasion is an open wound for many Panamanians who each year commemorate the event and have called for the anniversary, Dec. 20, to be declared a day of national mourning.

Fri Oct 15 , 2021
FILE PHOTO: U.S. Senator Kyrsten Sinema (D-AZ) is pursued by reporters after it was announced that the U.S. Senate reached a deal to pass a $480 billion increase in Treasury Department borrowing authority, at the U.S. Capitol in Washington, U.S., October 7, 2021. REUTERS/Leah Millis October 15, 2021 By Jarrett […] 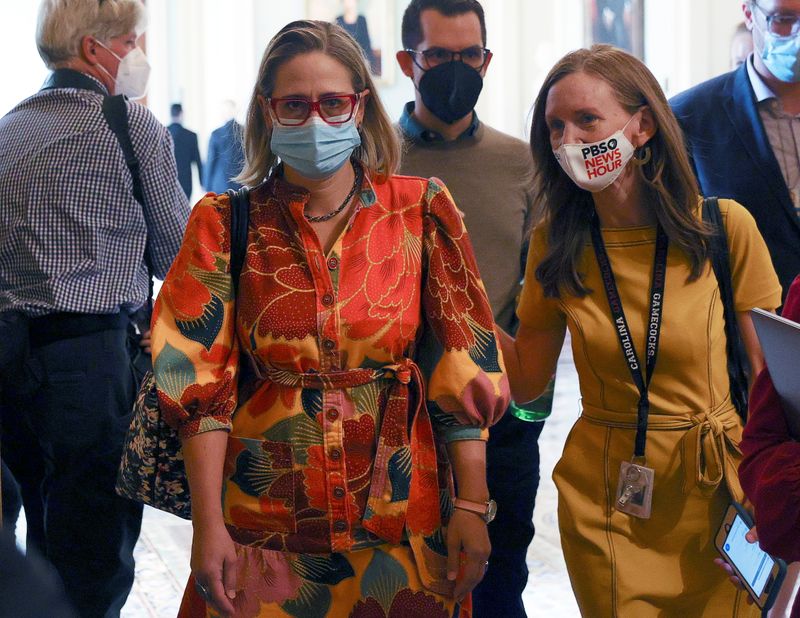