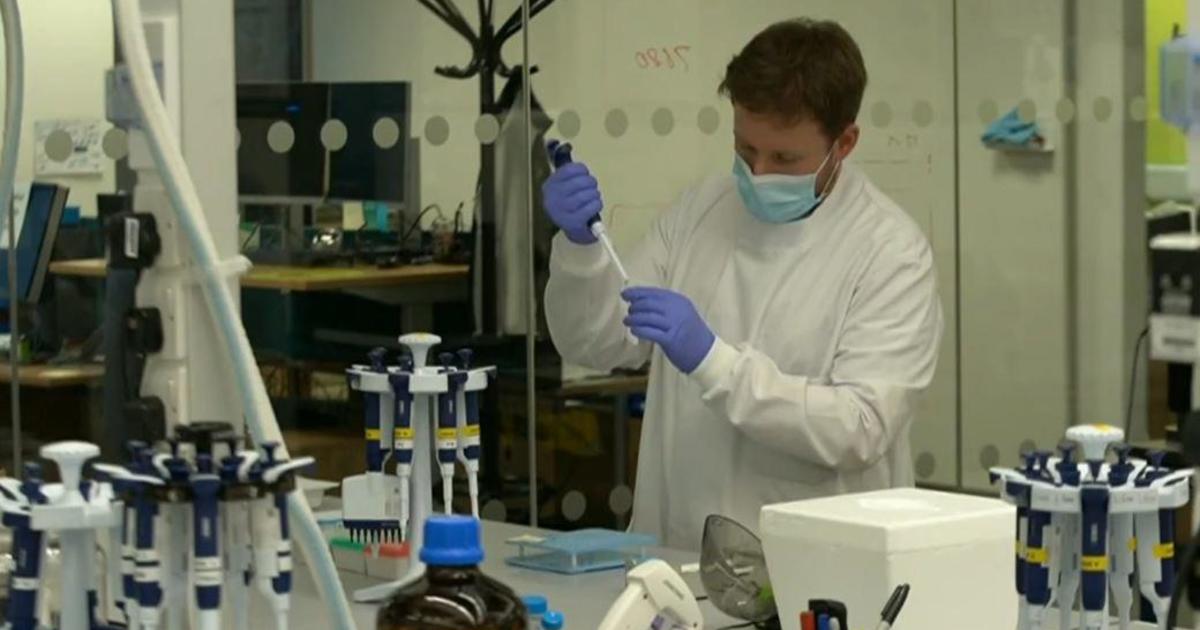 The Omicron variant of SARS-CoV-2 is the latest strain of the coronavirus to be designated a “variant of concern” by the World Health Organization: more and more countries are reporting cases, and it has an unusual combination of mutations that may enable it to spread faster. Scientists are also trying to determine whether the current vaccines are effective against it.

Has it reached the U.S.?

American health authorities say no cases have yet been reported here, but over the weekend, like several other countries, the Biden administration placed travel restrictions on several southern African countries where cases were first spotted.

On Monday, President Biden said U.S. health officials do not currently believe “that additional measures will be needed” but are working with drugmakers to speed “contingency plans for vaccines or boosters.” He plans to announce a new strategy soon to curb the virus this winter.

Mr. Biden told reporters Monday that the approach is “not with shutdowns or lockdowns, but with more widespread vaccinations, boosters, testing and more.”

Why are authorities worried about Omicron?

Health authorities say Omicron carries a unique set of mutations that might give the virus an advantage in driving new surges of infections compared with the fast-spreading Delta variant, which currently makes up virtually all U.S. cases. Omicron, which may spread even faster, appears to have evolved independently from the Delta variant, descending from another strain that appeared in mid-2020.

“The Omicron variant is the most divergent variant that has been detected in significant numbers during the pandemic so far which raises serious concerns that it may be associated with significant reduction in vaccine effectiveness and increased risk for reinfections,” European health officials said on Friday.

Named B.1.1.529 by scientists who track the evolution of the virus, Omicron also shares some distinctive changes seen in other variants of concern that have been able to evade the body’s defenses built up from surviving COVID-19 or from vaccination.

How long will it take to know whether Omicron is more dangerous than other variants?

Assessing Omicron’s cocktail of mutations could take weeks. Scientists will need to conduct experiments with the virus and dummies engineered to mimic Omicron’s characteristic mutations.

Dr. Anthony Fauci told Mr. Biden Sunday that “it will take approximately two more weeks to have more definitive information on transmissibility, severity and other characteristics of the variant,” according to a White House statement.

South Africa, which was among the first to identify an Omicron case, has been seeing climbing infections and hospitalizations in recent weeks. Its National Institute for Communicable Diseases observed that the new variant does not seem to be leading to worse or different symptoms, which would offer some reassurance if that continues to be the case.

“This variant is a concern, not a cause for panic. We have the best vaccines in the world and the best medicines, the best scientists, and we’re learning more every single day,” President Biden said on Monday.

Do current vaccines work against Omicron?

Moderna, Johnson & Johnson, and Pfizer and BioNTech all are still investigating the impact Omicron may have on the effectiveness of their vaccines. The companies say they are already preparing to potentially change their vaccines to target Omicron.

If Omicron is determined to be a “vaccine-escape variant,” Pfizer and its German partner BioNTech say they could produce “a tailor-made vaccine” in around 100 days, subject to regulatory approval. Moderna says its Omicron-specific booster could be advanced to testing within three months, in addition to other booster candidates they are already developing.

The vaccines currently used in the U.S. were designed to target the early strains of the virus, though health officials have said the shots could eventually be changed — like the annual flu shot — to respond to new variants.

“I actually think we’re in a really good place with the technologies we have, because if a new variant came along, it would probably be a matter of very few months before we would be mass-producing a vaccine against that variant,” Dr. Peter Marks, the FDA’s top vaccines official, told an American Medical Association webinar earlier this month.

On Monday, President Biden said he was directing the FDA and CDC “to use the fastest process available, without cutting any corners for safety” to get new vaccines greenlighted if necessary.

“The spike protein, if it changes, it can be easily then shifted back into the vaccine manufacturing process, not just for the mRNA, but for other vaccines as well. We won’t have to go back to square one and do large scale clinical trials,” said Marks.

Which countries have Omicron cases?

At the time the World Health Organization deemed Omicron a variant of concern, the agency said the “first known confirmed” sample of the virus had been collected on November 9 and was first reported to the WHO from South Africa on November 24.

Labs from at least 12 countries — Australia, Belgium, Botswana, Canada, China, Germany, Hong Kong, Israel, Italy, Netherlands, South Africa, United Kingdom — have since reported at least one case of Omicron, according to the GISAID database that tracks the virus.

A handful of other countries have also publicly announced cases of Omicron. Many reports outside Africa have been linked to recent travel, though health officials in Scotland said Monday that some individuals who tested positive for Omicron did not have a recent history of trips abroad.

While the president and top U.S. health officials acknowledge that travel restrictions imposed by the administration would ultimately not prevent Omicron from infecting Americans, they argue the bans may “slow the speed” of the virus.

“The reason you do a travel ban is not that you think naively that you’re going to keep it out, but it buys you a couple of weeks,” Dr. Anthony Fauci told “CBS Mornings” on Monday.

Will Omicron have an impact on the effectiveness of current COVID drugs?

A spokesperson for Merck and Ridgeback, whose antiviral molnupiravir is to be vetted by the FDA’s outside advisers on Tuesday, said the companies believe the drug “will likely be active” against Omicron but have yet to conduct specific studies to verify its effectiveness.

Pfizer’s CEO told CNBC on Monday that he believed its antiviral Paxlovid would work “for all known mutations including Omicron.”

Manufacturers of the monoclonal antibody treatments currently used to treat COVID-19 also say they are looking into Omicron’s impact on their drugs.

Eli Lilly, whose combination bamlanivimab and etesevimab has occasionally been paused by the Biden administration over variant concerns, said the company was “working quickly” to gather and analyze data on Omicron.

Regeneron, the developer of the REGEN-COV monoclonal antibody, says it is also working on a variety of “next gen” candidates against the new variant, as well as a potential new combination of its monoclonal antibody in a clinical trial.

Vir and GlaxoSmithKline say its monoclonal antibody sotrovimab “is likely to maintain activity and potency against this variant” citing their drug’s design targeting a part of the virus that “is less likely to mutate.” The companies are working to confirm this in their labs.

“Fortunately for us, the PCRs that we mostly use would pick up this very unusual variant that has a real large constellation of mutations,” Dr. Anthony Fauci, the president’s chief medical adviser, said Monday.

And some tests may even help accelerate the ability of health officials to track and investigate cases of Omicron. Unlike the Delta variant, cases of Omicron lead to the same “S-gene target failure” seen in positive tests for infections by the Alpha variant earlier in the pandemic.

“You can get a sense before you do the whole genome sequencing of what proportion of the samples that are testing positive might be this variant,” Richard Lessells, an infectious diseases specialist at the University of KwaZulu-Natal said at a press conference with South African health officials on Thursday.

South African scientists have been using this change to speed tracking of potential cases of the variant, before they can complete the process of sequencing samples to confirm which variant caused each positive test.

“It gives us concern that this variant may already be circulating quite widely in the country,” said Lessells.

Tue Nov 30 , 2021
Lifestyle tops the list as the most important factor when determining how long a person will live, according to a recent CBS News poll. A person’s lifestyle comes out far ahead of a person’s genes (19%), their emotional well-being (16%) and economic status (13%). Fewer Americans (4%) think that where […] 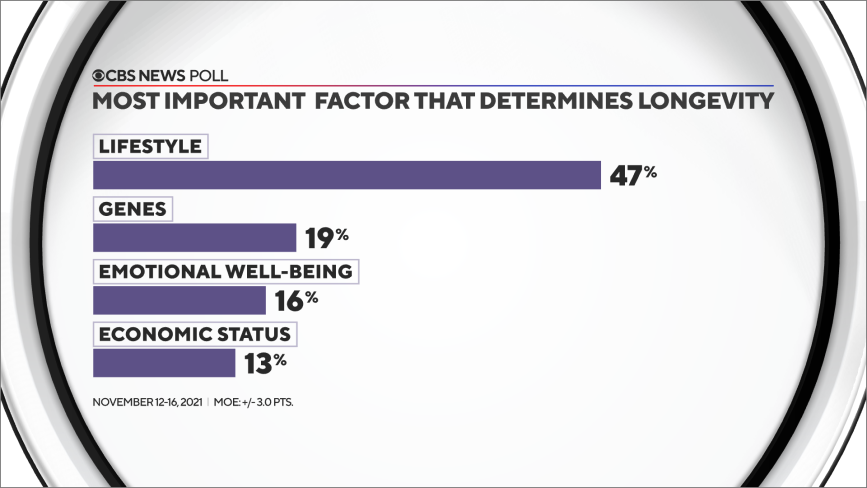