NEW YORK (Reuters) – Oil prices rose more than 3% on Wednesday after President Donald Trump falsely claimed victory in a tight U.S. election with millions of votes still to be counted and after data showed a large decline in U.S. crude inventories.

A victory by Trump is viewed as bullish for oil because of sanctions on Iran and his support for Saudi-led oil production cuts to support prices.

A contested result and prolonged uncertainty is seen as the most bearish outcome for oil and markets in general, while a win for Joe Biden would be seen as bearish to neutral because of his support for green policies and softer stance on Iran.

Trump falsely claimed to have won after his Democratic challenger Biden said he was confident of winning a contest that will not be resolved until a handful of states finish vote counts in the next hours or days.

“Perhaps the biggest conclusion to be drawn at this stage is that there is only a small likelihood that existing oil & gas tax incentives will be removed in the U.S. – even if Biden emerges as the winner – given the narrow margin of victory and a probable Republic majority in the U.S. Senate,” said Artem Abramov, head of shale Research at Rystad Energy.

Wall Street surged and U.S. dollar gained against a basket of currencies, as the too-close-to-call presidential election left traders betting on a divided Senate that would keep stimulus flowing but hold tax rises and regulation in check. [MKTS/GLOB]

Oil prices were also supported by the possibility that OPEC producers and Russia could consider deferring a planned increase in OPEC+ oil output from January as a second coronavirus wave stifles a recovery in fuel demand.

The Organization of the Petroleum Exporting Countries (OPEC)and allies led by Russia, a grouping known as OPEC+, earlier agreed to ease cuts by 2 million barrels per day from the current 7.7 million bpd from January.

More lockdowns could, however, cap oil price gains and weigh on demand. Italy, Norway and Hungary have tightened coronavirus curbs, following Britain, France and other countries.

Britain recorded 492 new COVID-19 deaths on Wednesday, the biggest toll since May 13 and up from 397 on Tuesday, government data showed.

Wed Nov 4 , 2020
U.S. stocks climbed on Wednesday, led by tech shares, even as the results of the presidential contest so far failed to yield a clear winner. The Dow Jones Industrial Average jumped 610 points, or 2.2%. The S&P 500 traded 2.8% higher. The tech-heavy Nasdaq Composite popped 3.8% as investors crowded […] 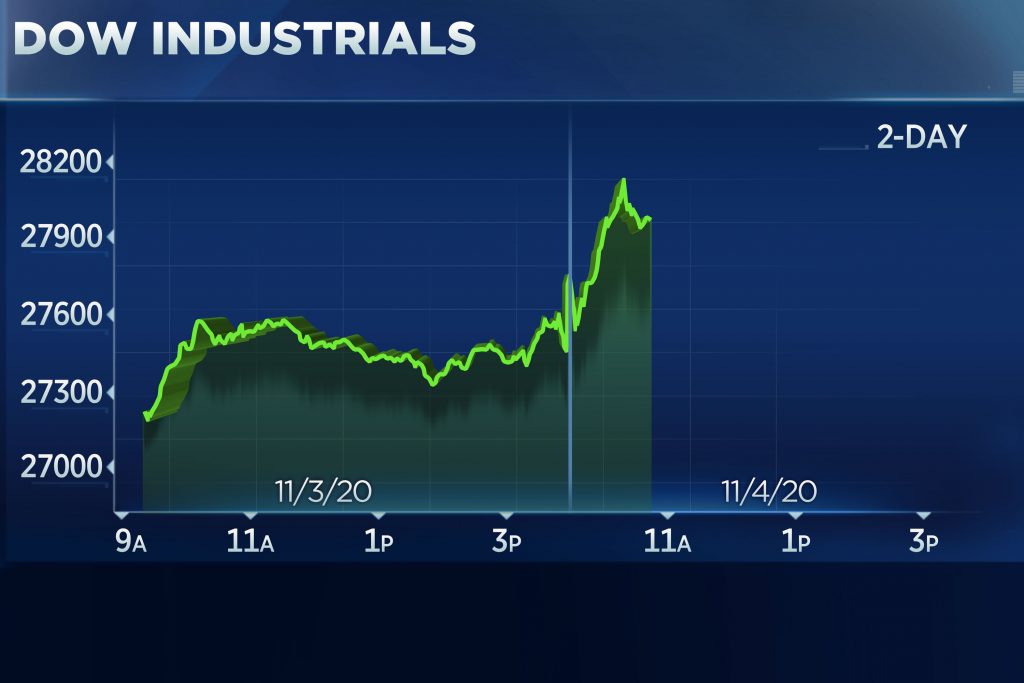