PARIS (Reuters) – Global economic growth is set to peak at an eight-year high next year as uninspiring investment and increasingly dangerous debt levels limit room for further improvement, the OECD said on Tuesday.

The global economy is on course to grow 3.6 percent this year before reaching 3.7 percent next year then ease back to 3.6 percent in 2019, the Organisation for Economic Cooperation and Development (OECD) said in its latest outlook.

The Paris-based policy forum nudged up its estimate for this year from 3.5 percent in its last forecasts dating from September, and left its 2018 projection unchanged.

“There is still work to be done, we’re still resting a bit comfortably on the incoming data, which have been supported by fiscal and monetary policy,” she added.

Mann said that in particular companies were not investing enough to make up for the depreciation of existing assets, and even less so in making additional investments for further growth.

Despite weak private investment, households and companies were bingeing on cheap debt in many countries, exposing themselves to trouble as central banks tighten monetary policy.

With its strongest growth in a decade, the euro area was seen outpacing other major developed economies this year with 2.4 percent growth before easing to 2.1 percent in 2018 and 1.9 percent in 2019.

In September, the OECD had foreseen growth of 2.1 percent this year for the euro area and 1.9 percent next year.

Marginally raising its estimates for the United States, the OECD forecast growth in the world’s biggest economy would pick up from 2.2 percent this year to 2.5 percent in 2018, boosted by an expected cut in corporate and income tax, before easing to 2.1 percent in 2019.

But it warned that government debt, the highest ever seen in an OECD member at 220 percent of GDP, posed a serious risk and required a broad-based plan to maintain confidence in Japan’s fiscal sustainability.

The OECD left its estimates for China unchanged, forecasting growth would slow from 6.8 percent this year to 6.6 percent in 2018 and 6.4 percent in 2019 as exports slow.

FIFA will not tolerate racism at 2018 World Cup: Infantino

Tue Nov 28 , 2017
November 28, 2017 (Reuters) – FIFA president Gianni Infantino has said racism will not be tolerated at next year’s World Cup in Russia, adding that referees will have the power to stop or even abandon matches if discriminatory incidents take place. Several players, including Brazil and former Zenit St Petersburg […] 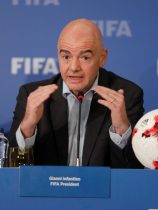