In the northwest suburbs of Dallas, Congressman Kenny Marchant has kept his Texas 24th Congressional district red since 2004. Only four Democratic candidates have ever filed to challenge him.

But even before announcing he would be retiring in 2020, at least six Democratic challengers filed to take his suburban district in 2020. Two Republicans have filed since his August announcement.

“All these signs now are duplicated, multiplied on the side of the street. You see not just red signs but blue signs and libertarian signs,” Republican Terri Green told CBS in an interview.

Green, who is the Chair of the Republican Women of Greater North Texas, said the 2018 midterms was a wake-up call for Republicans in North Texas.

“We just assumed everybody running for office is going to be a Republican and all of a sudden everybody gets a Democratic opponent,” Green said.

Texas has long been considered ruby red, but now Democrats have zeroed in on flipping the state — maybe even on a presidential scale. Two Texans, former Congressman Beto O’Rourke and former Obama Housing Secretary Julián Castro, are running for the Democratic nomination and have focused on winning the state’s 38 electoral votes, which have not gone to a Democrat since 1976.

The state has 36 Congressional seats, the most out of any state besides California. Republicans still hold a majority with 23 seats, but lost two suburban-area seats near Houston and Dallas in 2018 and six of the seats Republicans were able to keep in 2018 were won by 5 points or less. Additionally, six House Republicans have announced they would not seek re-election in 2020, which groups like the Democratic Congressional Campaign Committee (DCCC) have been calling “Texodus.”

The DCCC, which works to elect and re-elect Democrats to the U.S. House of Representatives, has made Texas a big focus of their 2020 efforts. Earlier this year they set up a field office near the state capital of Austin and are targeting six U.S. House seats in suburban areas. The state’s Democratic and Republican party groups have also already started their own voter registration and mobilization efforts.

Texas’ shift toward purple is at least partially rooted in the influx of new state residents, although O’Rourke narrowly won native Texans in 2018. According to a 2017 survey by the U.S. Census Bureau, Texas is second when it comes to the number of people moving in from another state. Additionally, 2018 population estimates also show close to a 400,000 increase since 2011 for minorities in Denton, Collin and Tarrant Counties combined.

“That demographic change has been taking place over time but Asian and Hispanic turnout is about 60 percent of Anglo turnout, so while that change is taking place, it shows itself a bit slower electorally than it appears in Democracy itself,” Cal Jillson, a professor of political science at SMU and an expert on Texas elections, told CBS News in an interview.

It’s an increased competitive nature for these historically red districts that has been a wakeup call for Texas republicans like Denton County Republican Party Precinct Chair Carmen Prince.

“There were people who were complacent, and they thought that because in previous elections, we are red so they said oh, you don’t have to worry about that, we will be red, and we’re not,” Prince said, “So we have to educate people and tell them that’s not the case.”

According to a GOP official, this is the third straight election cycle where the Republican National Committee has had paid staff on the ground in Texas, and the staff covers all 254 counties in Texas. The National Republican Campaign Committee (NRCC), which works to elect Republicans to Congress, are targeting the two seats they lost in 2018 and are encouraged by the profiles and fundraising numbers of two candidates there, Wesley Hunt and Genevieve Collins.

“Republicans are on offense in the Texas suburbs,” said NRCC Spokesman Bob Salera. “The suburban seats Democrats claim to be targeting are solid Trump districts, and the DCCC is delusional if they think they can turn them blue by running socialist candidates with the president at the top of the ticket.”

At a Trump Leadership Initiative training put on by the Trump campaign in Dallas on Wednesday, the trainer stressed the importance of getting involved earlier this cycle.

For Denton Democratic Party Chair Dr. Anjelita Cadena, this election cycle has given a more direct line of communication, staff and money, with the state and national party groups. Democratic Women of Denton County President Sandy Swan said 2018’s midterms was the first time they got money from the state to the county party.

“It’s a good resource. We would send money to the national party, and none of it would get back to Texas. They’d spend it in other places, and now they’re spending it here,” Cadena told CBS News. “They were doing something before, but there was no special interest in North Texas.”

The seven women CBS News spoke to from both parties emphasized that 2020 will center on which party engages the most voters to turn out not just in the general election but in the primary, the municipal, the potential primary run-off, and then the general.

Glynis Chester, the Vice President of the Texas Federation of Republican Women, told CBS News that “there has definitely been an uptick in the amount of politics.”

“It used to be a very quiet sort of thing up here, and now politics is everywhere,” Chester said, “So you definitely see more signs go up and you see more movement on both sides.”

Fri Oct 18 , 2019
Two NASA astronauts will take part in the first all-female spacewalk Friday, a critical outing to restore lost power in the wake of an equipment failure that cropped up after new batteries were installed in the International Space Station’s solar power system during two recent spacewalks. Astronauts Christina Koch, making […] 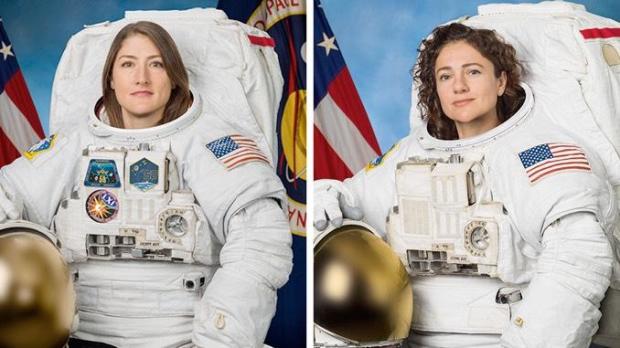