FILE PHOTO: A North Korean flag flutters on top of a 160-metre tower in North Korea’s propaganda village of Gijungdong, in this picture taken from the Tae Sung freedom village near the Military Demarcation Line (MDL), inside the demilitarised zone separating the two Koreas, in Paju, South Korea, April 24, 2018. REUTERS/Kim Hong-Ji

The North, criticizing the U.S.-South Korean drills and their use of high-tech weapons, has fired a series of missiles and rockets since its leader Kim Jong Un and U.S. President Donald Trump agreed at a June 30 meeting to revive stalled denuclearization talks.

Trump has played down the tests by saying they did not break any agreement he had with Kim but the talks have yet to resume. Analysts believe the tests are designed both to improve North Korean military capabilities and to pressure Washington to offer more concessions.

South Korea’s Joint Chiefs of Staff (JCS) said what appeared to be two short-range ballistic missiles were fired from near Kwail on North Korea’s west coast, about 125 km (80 miles) southwest of Pyongyang, in South Hwanghae province early on Tuesday. They were the fourth set of launches since July 25.

The missiles flew about 450 km (280 miles) and reached an altitude of 37 km (23 miles), the JCS said. U.S. and South Korean intelligence agencies deemed they had similar flight characteristics to the short-range ballistic missiles launched by North Korea on July 25, it said.

Kim Dong-yub, a military expert at South Korea’s Kyungnam University, said the latest launch area was significant because the flight path of 450 km meant that all of South Korea was in range of such missiles.

“It becomes difficult to detect the origin of the launch in advance because it is capable of launching a missile from most anywhere in North Korea, targeting all of South Korea,” he said.

South Korea’s defense ministry said on Tuesday the missile launch went against the spirit of easing tension on the Korean peninsula.

The launches on July 25 were the first since Trump and Kim met at the heavily armed Demilitarized Zone that separates the two Koreas on June 30. What was agreed at that meeting is now under scrutiny.

North Korea has repeatedly complained that the United States and South Korea’s joint military drills violate a pledge made by Trump to Kim.

A North Korean foreign ministry spokesman said in a statement released through state news agency KCNA that the North remained committed to resolving issues through dialogue.

However, Pyongyang “will be compelled to seek a new road as we have already indicated” if South Korea and the United States continue with hostile military moves, he said.

The arrival of new, U.S.-made F-35A stealth fighters in South Korea, the visit of a U.S. nuclear-powered submarine to a South Korean port, and U.S. tests of ballistic missiles are among the steps that have forced North Korea to continue its own weapons development, the spokesman said.

“The U.S. and South Korean authorities remain outwardly talkative about dialogue,” he said. “But when they sit back, they sharpen a sword to do us harm.”

A JCS spokesman told a regular news briefing on Monday the allies were preparing for a joint exercise in the second half of the year but would not confirm the name of the drill or whether it had already started.

A United Nations report said on Monday Pyongyang has continued to enhance its nuclear and missile programs and used cyberattacks to take in $2 billion to fund the development.

The testing of short-range missiles by North Korea is banned by a 2006 United Nations Security Council resolution demanding that North Korea suspend all activities related to its ballistic missile program.

Short-range missiles pose no threat to U.S. territory but do put at risk U.S. allies Japan and South Korea and the tens of thousands of U.S. troops stationed in both countries.

Japan’s defense ministry said it did not see any imminent threat to Japanese security from the latest projectile launch by North Korea.

After shootings, tech companies pressured to pull plug on 8chan

Tue Aug 6 , 2019
A woman places a rose on a cross as people gather to pay their respects at a growing memorial site two days after a mass shooting at a Walmart store in El Paso, Texas, U.S. August 5, 2019. REUTERS/Callaghan O’Hare August 6, 2019 By Katie Paul and Elizabeth Culliford SAN […] 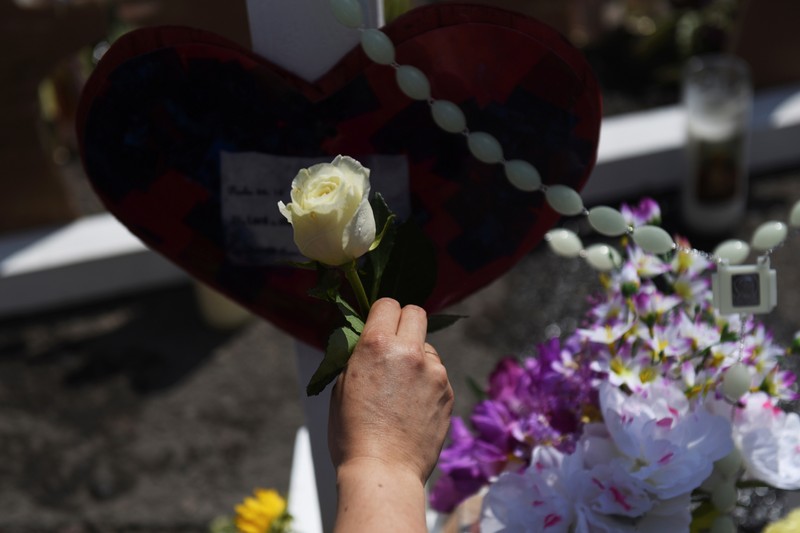