WASHINGTON — The collapse of talks between President Donald Trump and North Korean leader Kim Jong Un has temporarily stalled efforts to dismantle a nuclear program that has taken leaps forward in recent years.

North Korea, the only nation to have tested nuclear weapons this century, spent most of Trump’s first year in office perfecting its nuclear arsenal. The newest member of the world’s exclusive nuclear weapons club has stopped testing for now as the U.S. and international community offer the possibility of relief from crippling economic sanctions.

Still, it does not mean Pyongyang cannot find ways to advance its nuclear and missile programs while the Trump administration tries to forge a path to disarmament.

Trump and Kim’s second face-to-face summit ended abruptly early Thursday before they could reach a deal on nuclear disarmament of the Korean Peninsula. The U.S. president said he cut off talks when North Korea offered to shut down only part of its nuclear options in exchange for full sanctions relief. Pyongyang disputed his account, saying it wanted only some of its current economic penalties lifted.

While North Korea has paused the nuclear and missile tests that prompted Trump’s threat to bring “fire and fury” upon the reclusive nation, it had already made significant progress before the historic dialogue with the U.S. started.

“It’s a good thing that they aren’t testing right now but it doesn’t mean that they can’t advance their program in other ways or continue to add warheads to their arsenal or missiles to their delivery system stockpiles,” said Alexandra Bell, senior policy director at the Center for Arms Control and Non-Proliferation. “The lack of testing just means that they are comfortable with the designs they have,” Bell told CNBC.

Under the third-generation North Korean leader, the reclusive state has conducted its most powerful nuclear test, launched its first-ever intercontinental ballistic missile and threatened to send missiles into the waters near Guam.

Since 2011, Kim has fired more than 85 missiles and four nuclear weapons tests, which is more than what his father, Kim Jong Il, and grandfather, Kim Il Sung, launched over a period of 27 years.

Starting with the most recent, here is a look at North Korea’s defiant rocket launches in 2017, which often provoked angry responses from Trump:

The Hwasong-15, or KN-22, missile is believed to have a range capable of hitting the entire continental United States, according to estimates from the Missile Defense Project at the Center for Strategic and International Studies.

Following the launch, Pyongyang issues a statement saying that the Hwasong-15 is “capable of carrying a super-heavy nuclear warhead.”

The rocket flies for 53 minutes and lands within Japan’s exclusive economic zone.

Sept. 14, 2017: For the second time in under a month, the North fires a second Hwasong-12 missile over Japan, The Associated Press reports. The rocket travels 2,300 miles, which is further than the previous missile launched on Aug. 28.

The intermediate-range missile is launched from Sunan, the location of Pyongyang’s international airport and the origin of the earlier missile that flew over Japan.

Sept. 3, 2017: The rogue regime carries out its sixth and most powerful nuclear test, saying it detonated an advanced hydrogen bomb designed for a long-range missile.

And while the U.S. has yet to verify that the weapon was a hydrogen bomb, experts widely agree that the detonation created an explosion exceeding previous North Korean nuclear tests.

The bomb is estimated to have an explosive yield of 120 kilotons, which equates to a blast created from 265 million pounds worth of TNT, according to Norsar, a Norwegian geoscience research foundation.

The official says the missile flew for about 1,678 miles before it splashed down into the Sea of Japan.

Japanese Prime Minister Shinzo Abe says the missile test is a “serious and grave threat to Japan.” Abe adds that he would ask the United Nations to up the pressure on Pyongyang.

Aug. 26, 2017: Kim’s regime launches three short-range ballistic missiles into the sea between the Korean Peninsula and Japan, according to U.S. and South Korean military.

Two of the KN-21 missiles fly approximately 150 miles before falling into the sea while the other missile blows up almost immediately.

Nearly three weeks after the North’s first ICBM test, Kim launches a second Hwasong-14 rocket to prove once more that the U.S. mainland is within his reach.

The second ICBM flies farther and for longer than the missile tested July 4. The most recent Hwasong-14 missile took flight for 47 minutes and traveled a distance of about 620 miles, South Korean military officials told Reuters.

The latest test shows that the North’s missile capabilities and arsenal are much more developed than previously believed.

July 4, 2017: In a clear message to the Trump administration, North Korea conducts its first-ever intercontinental ballistic missile, or ICBM, test while the U.S. celebrated Independence Day.

The missile has an estimated range in excess of 6,200 miles, making it capable of reaching most of the continental U.S., according to estimates from the Missile Defense Project at the Center for Strategic and International Studies.

The North’s state-run news agency, the Korean Central News Agency, says that the “almighty ICBM rocket” was a Hwasong-14 missile. The South Korean military says the missile flew for approximately 40 minutes and traveled more than 578 miles.

June 7, 2017: Less than a week after the United Nations passed a fresh round of North Korean sanctions, Kim’s regime fires four land-to-ship missiles off its east coast.

And while the North has been reportedly developing anti-ship missiles since the 1990s, the Kumsong-3 missiles first appeared in a Democratic People’s Republic of Korea propaganda video in June 2014.

The existence of these rockets undoubtedly adds a new threat to maritime activity in the Sea of Japan.

May 28, 2017: Kim unveils a new short-range Scud-class ballistic missile ahead of North Korea’s ninth test of the year.

During its flight test, the KN-18 missile demonstrated a range of around 280 miles before it fell into the Sea of Japan.

May 21, 2017: The KN-15 (Pukkuksong-2) missile, which was first launched by the North earlier in the year, flies for 310 miles before landing outside of Japan’s exclusive economic zone.

The two nations remain at war despite a truce ending their 1950-53 conflict.

May 14, 2017: After several attempts, Pyongyang conducts a successful test of the Hwasong-12. The missile is launched from a location near the city of Kusong and flies for approximately 30 minutes.

Reacting to the test, the White House issues a statement saying that North Korea has been “a flagrant menace for far too long.”

April 29, 2017: U.S. and South Korean officials say a North Korean ballistic missile failed shortly after it was launched. The missile flies for 15 minutes before it breaks up during flight.

The missile explodes seconds after it was launched.

April 5, 2017: On the eve of a summit meeting between Trump and Chinese President Xi Jinping, North Korea fires a ballistic missile from its east coast.

The launch is believed to be the first test of the Hwasong-12, a liquid-fueled intermediate-range ballistic missile, with an expected range of 2,800 miles.

However, the missile flies for approximately nine minutes and 40 miles before it spins out of control, according to a U.S. Pacific Command statement.

“We confirm that North Korea has launched one missile from Wonsan airbase this morning and failed,” a South Korean military official tells NBC News. “We are in the process of analyzing the type of the missile.”

“The launches are clearly in violation of Security Council resolutions. It is an extremely dangerous action,” Japan’s Abe says after the North’s test.

Feb. 12, 2017: Not even a month after Trump’s inauguration, North Korea launches a new medium-range ballistic missile.

The KN-15 (Pukkuksong-2) is launched from the North Pyongan province and travels 310 miles before landing in the Sea of Japan.

The Pukkuksong-2 is believed to have a solid-fuel-propelled engine, which is capable of faster launches. The only other known solid-fuel missile in North Korea’s arsenal is the short-range KN-02, according to the Missile Defense Project.

Fri Mar 1 , 2019
Quick Take A viral meme distorts the facts about the Iran nuclear agreement. The deal, approved by six countries and the European Union, gave Iran access to its own frozen assets. Full Story As a candidate during the 2016 campaign, President Donald Trump criticized the international agreement to curb Iran’s […] 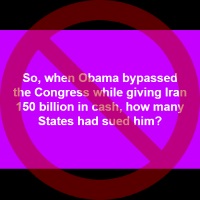