ISTANBUL (Reuters) – Northern Cyprus’s President Mustafa Akinci and Prime Minister Ersin Tatar will go to a run-off in a week’s time after each won about 30% support in Sunday’s presidential poll, official media said.

Career politician Akinci, 72, supports reuniting the Mediterranean island which split after a 1974 Turkish invasion in response to a brief Greek-inspired coup.

There were 11 candidates in total in Sunday’s vote where Turkish Cypriot voters cast ballots in masks and gloves to curb the risk of coronavirus infection. With a population of 326,000, Northern Cyprus has reported 807 infections and four deaths.

Northern Cyprus is recognised as an independent state only by Turkey. Other countries consider it part of Cyprus.

The latest United Nations-mediated peace negotiations failed in 2017 and there has been no progress in talks since.

On Thursday, Northern Cyprus reopened part of the beachfront of a resort abandoned for 46 years in a move that could hurt efforts to revive dispute settlement talks.

The president of Cyprus, Nicos Anastasiades, called the move “illegal”.

As well as having an impact on inter-island talks, the result of North Cyprus’ election may influence negotiations between Turkey and Greece over their contested maritime claims in the eastern Mediterranean.

(Reporting by Yesim Dikmen in Istanbul and Tuvan Gumrukcu in Ankara; Writing by Ezgi Erkoyun; Editing by Andrew Cawthorne)

Andrew Cuomo & daughters on life during the pandemic

Sun Oct 11 , 2020
At the Governor’s Mansion in Albany, N.Y., like so many other homes across America, Sundays mean dinner with the family. And in this family, like so many others, the adult kids have moved back home: Michaela, Mariah and Cara Kennedy-Cuomo, all quarantining together with Governor Andrew Cuomo, their dad. “I […] 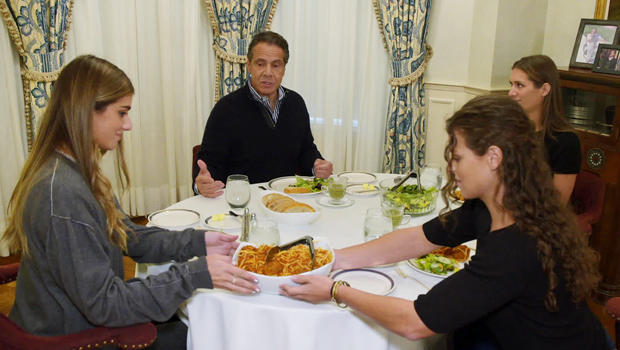