LONDON (Reuters) – British Prime Minister Boris Johnson will this week set out his plans to manage the COVID-19 pandemic in the winter months, announcing a decision to scrap the introduction of vaccine passports and steps to end some emergency powers.

Johnson, under fire from some in his governing Conservative Party for raising taxes to fix a health and social care crisis, looks set to try to soothe those critics by ditching plans to introduce passports despite an increasing number of coronavirus cases.

Speaking to broadcasters, Health Minister Sajid Javid said he did not anticipate more lockdowns and that the vaccine passports would not be introduced in England, as the government depends instead on vaccines and testing to defend the public.

“Now that we’re entering autumn and winter … the prime minister this week will be setting out our plans to manage COVID over the coming few months and in that we will be making it clear that our vaccine programme is working,” Sajid Javid told Sky News.

He told the BBC he was not “anticipating any more lockdowns” but would not take the measure off the table, that the government would not go ahead with vaccine passports to allow people to attend mass events and he wanted to “get rid of” PCR tests for travellers as soon as possible.

Javid added the government would remain “cautious”, but “the vaccine programme, our testing programme, our surveillance programme, the new treatments … this is all our wall of defence and whilst there’s a lot of virus around, it is working”.

Britain, which has one of the highest official COVID-19 death tolls in the world, has seen the number of cases climb over the last few months after easing restrictions in July, when the government first bet on vaccines to protect the public.

The government was handed sweeping emergency powers in March 2020 with the introduction of the Coronavirus Act, which included measures to allow the authorities to bar protests, shut down businesses and restrict travel.

The main opposition Labour Party said it agreed it was a “reasonable” approach to take some measures off the statute book but that lawmakers would study the detail of the proposals.

“Obviously we will want to study the detail when it comes to parliament, because there have been huge concerns about the way in which the Coronavirus Act has been misused by the authorities,” Labour’s health policy chief Jonathan Ashworth said.

In Hungary, pope says anti-Semitism ‘fuse’ must not be allowed to burn

Sun Sep 12 , 2021
Pope Francis leads a mass in Heroes’ Square, in Budapest, Hungary, September 12, 2021. REUTERS/Remo Casilli September 12, 2021 By Gergely Szakacs BUDAPEST (Reuters) – Pope Francis called on Sunday for vigilance against a rise in anti-Semitism, saying during a brief trip to Hungary this was a “fuse that must […] 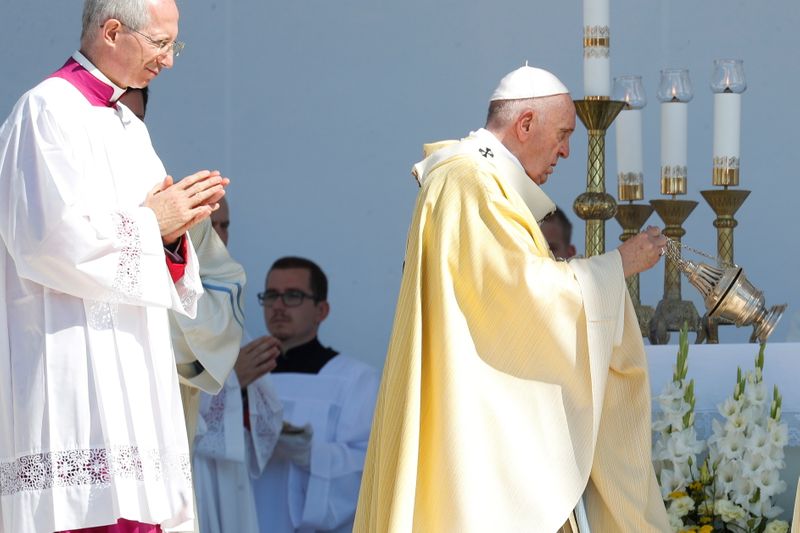