Anders Bjork had a goal and an assist, Charlie McAvoy and Sean Kuraly also scored goals and Brad Marchand, Brandon Carlo and David Krejci each had two assists for Boston, which has won four in a row since a season-opening 7-0 loss at defending Stanley Cup champion Washington. The Bruins have outscored their opponents 22-6 during the streak.

Tuukka Rask had 32 saves for the Bruins, who improved to 15-1-1 in their last 17 games against Detroit, including seven wins in a row.

Filip Hronek scored the first goal of his NHL career, and Dylan Larkin added a short-handed goal for Detroit. Jonathan Bernier had 31 saves for the winless Red Wings, who are off to their worst start since beginning 0-5 in the 1980-81 season.

Cody Eakin scored with 1:25 remaining in the third period, and Vegas ended a three-game losing streak with a win at Philadelphia.

Eakin fired a shot from the left circle for his second goal of the season on a pass from Ryan Carpenter.

The Golden Knights needed a spectacular save by goaltender Marc-Andre Fleury, who sprawled across the crease to get his glove on a shot by Philadelphia’s Claude Giroux with 38 seconds left.

Connor McDavid scored a power-play goal 6:23 into the third period and added an assist as Edmonton picked up its first win of the season at New York.

McDavid has either scored or assisted on all of Edmonton’s five goals this season. He recorded the secondary assist on Ryan Nugent-Hopkins’ first goal of the season in the opening period.

McDavid scored the tiebreaking goal when he put a backhander — after getting a cross-ice pass from Leon Draisaitl while positioned at the left side of the net — in the low slot off Henrik Lundqvist’s left leg.

Chris Wideman enjoyed his first career two-goal game, scoring in the first and third periods for host Ottawa in a rout of Los Angeles.

Wideman’s multi-goal effort came in his 161st career game and one day shy of the anniversary of his last goal.

Chris Tierney, Mark Stone and Colin White also scored for the Senators, who raced out to a 4-0 lead midway through the second period and were never threatened. Goalie Craig Anderson recorded 36 saves as Ottawa snapped a two-game losing streak.

Florida, Vanderbilt coaches get into verbal spat after hit 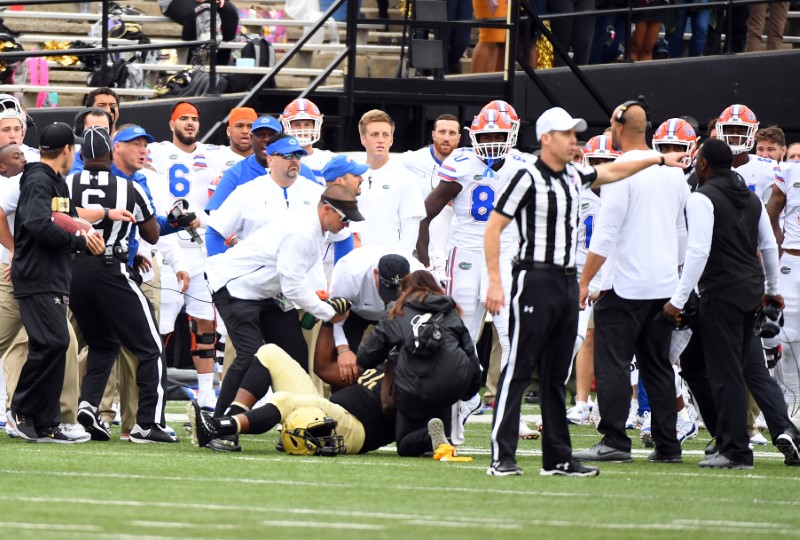