Aaron Rodgers threw five touchdown passes as the Green Bay Packers capped their fifth home game in seven weeks with a 42-24 dismantling of the Oakland Raiders on Sunday.

Green Bay improved to 6-1 under first-year coach Matt LaFleur behind the biggest game of the season from Rodgers. When he hit Marquez Valdes-Scantling for a 74-yard touchdown midway through the fourth quarter, Rodgers had six total touchdowns compared to six incompletions and a perfect 158.3 passer rating. He wound up completing 25 of 31 passes for 429 yards.

The game swung late in the first half.

With Green Bay having taken a 14-10 lead, the Raiders (3-3) motored into scoring position on a 48-yard catch by tight end Darren Waller to the 3. On second-and-goal at the 2, quarterback Derek Carr lunged head-first to the goal line with the ball extended. Before his knee hit the turf, Carr lost the ball, which bounced out of the end zone, resulting in a turnover and touchback for the Packers.

Todd Gurley caught a touchdown pass in his return and Los Angeles’ defense dominated in Atlanta. The Rams ended their three-game losing streak, while the Falcons lost their fifth in a row and saw quarterback Matt Ryan leave in the fourth quarter with an ankle injury.

Rams quarterback Jared Goff passed for 268 yards one week after he was held to 78 yards in the air as the Rams (4-3) won in their return to Atlanta, where they lost Super Bowl LIII to the New England Patriots to end last season.

Gurley caught a 13-yard TD pass from Goff in the second quarter after missing a game because of a quadriceps injury. Ryan was 16 of 27 for 159 yards for the Falcons (1-6). He was knocked out of the game with a right ankle injury after he was sacked by defensive tackle Aaron Donald.

Minshew, who completed 15 of 32 passes, found Keelan Cole for a 2-yard score with 12:41 left in the game and then converted a two-point pass to give Jacksonville a 17-10 lead. Yannick Ngakoue put the game away with a 23-yard interception return for a touchdown with 4:18 remaining.

Josh Lambo kicked four field goals as the Jaguars (3-4), and Leonard Fournette added 131 rushing yards on 29 attempts against the NFL’s worst running defense. Andy Dalton hit on 22 of 43 passes for 276 yards with a touchdown and three interceptions for the Bengals (0-7).

Josh Allen fired a 20-yard, fourth-quarter dart to John Brown for the go-ahead touchdown, leading host Buffalo to a victory over winless Miami.

Tre’Davious White had a goal-line interception in the third quarter and a forced fumble in the fourth to help hold off Miami. The interception was White’s third of the season, and the fumble was recovered by Jerry Hughes. Allen completed 16 of 26 passes for 202 yards and two touchdowns, with two sacks and no interceptions.

The Bills (5-1) are off to their best six-game start since 2008. The Dolphins (0-6) lost their ninth straight game dating to last season, despite getting 282 passing yards from Ryan Fitzpatrick, who threw for a touchdown and ran for another.

Jacoby Brissett completed 26 of 39 passes for a career-high 326 yards and four touchdowns to lead host Indianapolis past Houston in a battle for first in the AFC South.

With under three minutes left and forced to punt from its own end zone, Houston elected to take a safety, conceding two points when punter Bryan Anger ran out of the back of the end zone to make it 30-23 with 2:41 remaining. Houston got the ball back at its own 36-yard line with 1:41 left, but Deshaun Watson was intercepted by Darius Leonard with under a minute left.

Zach Pascal caught six passes for 106 yards and two touchdowns for the Colts (4-2). Watson completed 23 of 34 passes for 308 yards, with one touchdown and two interceptions for the Texans (4-3).

Running back Chase Edmonds had career highs with 126 rushing yards and three touchdowns, and quarterback Kyler Murray set an NFL record for most completions in the first seven games of a career as Arizona held off New York in rainy East Rutherford, N.J.

Edmonds scored on two 20-yard runs four minutes apart in the first quarter as the Cardinals took a 17-0 lead. His 22-yard run made it 24-14 with six minutes left in the third quarter. Arizona (3-3-1) won a third straight game for the first time since 2015.

Daniel Jones completed 22 of 35 passes for 223 yards and one touchdown with one interception, and Saquon Barkley rushed for 72 yards and a touchdown on 18 carries in his return from injury for the Giants (2-5), who have lost three in a row.

San Francisco (6-0) relied on its sturdy defense on a day featuring treacherous field conditions and allowed just 154 yards while starting 6-0 for the first time since the Joe Montana-led 49ers won their first 10 games in 1990. Julian Taylor recovered a fumble and made an important fourth-down stop for the Niners.

Jimmy Garoppolo completed 12 of 21 passes for 151 yards and one interception to improve to 12-2 as a starter during his tenure with the 49ers. Adrian Peterson rushed for 81 yards on 20 carries but lost a key fumble for Washington (1-6). Case Keenum completed 9 of 12 passes for 75 yards.

Minnesota star receiver Adam Thielen left the game in the first quarter due to a hamstring injury after catching a touchdown pass. Detroit’s top running back, Kerryon Johnson, exited in the first half with a knee injury.

Mon Oct 21 , 2019
Bolivia’s President and candidate Evo Morales of the Movement Toward Socialism (MAS) party greets supporters as arrives to vote during the presidential election at a polling station in a school in Villa 14 de Septiembre, in the Chapare region, Bolivia, October 20, 2019. REUTERS/Ueslei Marcelino October 21, 2019 By Daniel […] 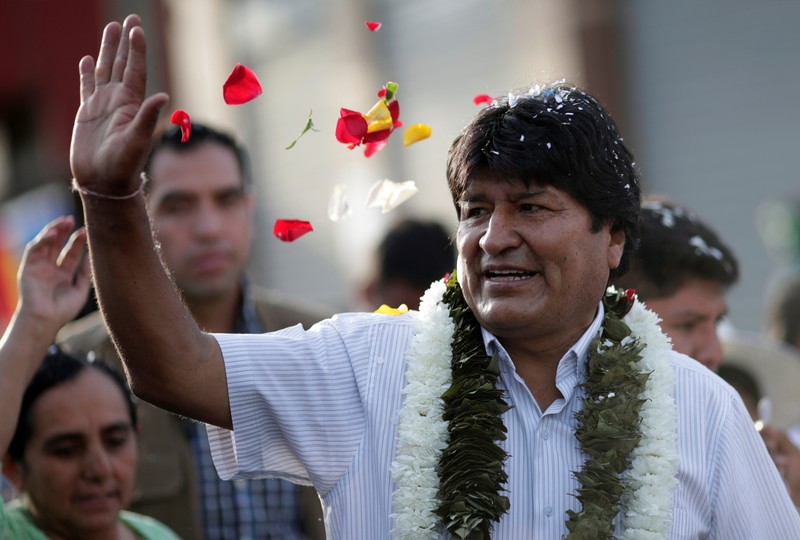