Launch of the next SpaceX Crew Dragon capsule, this one carrying four astronauts, is slipping a week or more, from October 31 to no earlier than “early to mid November,” the agency said Saturday, citing time needed to resolve a Falcon 9 engine problem that triggered a last-second launch abort last week.

The nine first-stage engines in the Falcon 9 that will launch the Crew Dragon are presumably healthy, but engineers want to make sure they fully understand what caused the Oct. 2 launch abort with a different rocket before pressing ahead with a piloted mission.

“We have a strong working relationship with our SpaceX partner,” Kathy Lueders, director of spaceflight operations at NASA Headquarters, said in a statement. “With the high cadence of missions SpaceX performs, it really gives us incredible insight into this commercial system and helps us make informed decisions about the status of our missions.

“The teams are actively working this finding on the engines, and we should be a lot smarter within the coming week.”

The Crew Dragon flight is the first operational mission by the commercially developed ferry ship, heralding the end of NASA’s sole reliance on Russian Soyuz spacecraft to carry U.S. and partner agency astronauts to and from the space station.

NASA astronaut Kate Rubins is using NASA’s last currently contracted Soyuz seat next week, joining two Russian cosmonauts for a flight to the International Space Station aboard the Soyuz MS-17/63S spacecraft. Liftoff from the Baikonur Cosmodrome in Kazakhstan is targeted for 1:45 a.m. October 14.

The SpaceX flight, known as “Crew-1,” will carry the next NASA-sponsored astronauts to the station for a six-month stay: Michael Hopkins, Victor Glover, Shannon Walker and Japanese astronaut Soichi Noguchi. That flight will be followed by downstream Crew Dragon and Boeing CST-100 Starliner flights next year.

SpaceX has launched 17 Falcon 9 rockets so far this year, the most recent on Oct. 6 when the company successfully fired 60 more Starlink internet satellites into orbit. Earlier this year, a Falcon 9 boosted a Crew Dragon into orbit on the program’s first piloted test flight, carrying NASA astronauts Douglas Hurley and Robert Behnken to and from the space station.

That set the stage for the first operational Crew Dragon flight with Hopkins and his crewmates. Originally targeted for October 23, the flight was moved early last week to October 31 to give SpaceX and NASA more time to resolve open issues and provide a breather of sorts between Rubins’ Soyuz launch, the October 21 return to Earth of the lab’s current three-man crew and the Crew-1 flight.

SpaceX provides few details about technical problems but in this case, founder Elon Musk tweeted the abort was triggered by an “unexpected pressure rise” in a first-stage engine turbopump mechanism.

It’s not known what data or other insights company engineers might have relied on to clear the Starlink rocket and payload, both owned by SpaceX, for launch.

Sat Oct 10 , 2020
After a short hiatus from meteor activity, the annual Orionids meteor shower is back to bring shooting stars to the night sky. It’s visible from about October 2 to November 7, as Earth passes through the debris from Halley’s Comet, but peaks on October 21. And it’s not the only […] 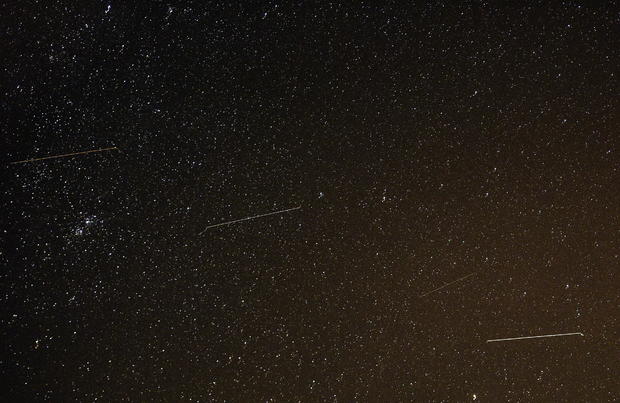