Hurricane season officially begins today, but thousands in Puerto Rico still haven’t recovered from last year’s. It could take another two months to fully restore power to more than 11,000 people who lost it during Hurricane Maria more than eight months ago, according to the latest estimate from the Puerto Rico Electric Power Authority.

The despair from Maria is still evident as residents try to rebuild. But progress is slow and the heartache runs deep. If you land in San Juan today you’ll find most people going about their lives. But just outside San Juan, it’s impossible to miss the misery, reports CBS News correspondent David Begnaud.

Jose Sepulveda is a bedridden cancer survivor whose wife hauls him onto the front porch every day because the heat is insufferable inside. They haven’t had electricity since last September.

“No power for eight months and hurricane season has now begun. Are you ready for another season?” Begnaud asked.

“Oh, no! No. How can we be ready. We have no light!” Sepulveda’s wife, Elogia, said. “It’s not easy and sometimes I start crying. But I got a Lord up there and he helps me.”

They live in Yabucoa where Hurricane Maria made landfall. Thirty-eight percent of people here still don’t have power. Across the island, 11,000 customers are still waiting. Carlos Reyes got so frustrated waiting, he restored his own power.

The Puerto Rico power grid is teetering, one government official said, despite $3.8 billion in repairs. Volunteers are stepping in where the government can’t, installing solar panels – including one at the home of Cecilia Burgos. The energy is being used to power a refrigerator. It’s one of the first things being asked: Can you help me keep my food cool? It’s also powering a fan that they leave off during the day to preserve the energy they have, and most importantly at night, they use the generator to power the fan over Burgos’ bed.

“Last year we had about 80 generators. We’re going to have 630 generators here on the island,” said Mike Byrne, who led FEMA’s response after Hurricane Maria. “We will do whatever it takes to take care whatever comes our way.”

In the meantime, they wait.

“We need your help and please never forget us,” Elogia said.

Hawaii warns residents in path of lava: Get out now or face arrest

Fri Jun 1 , 2018
Emergency officials in Hawaii have issued a dire warning to people still living in the Kilauea volcano lava zones. People who ignore mandatory evacuation orders do so at their own risk and are under threat of arrest. The notice comes as the most active volcanic fissure becomes even more explosive. […] 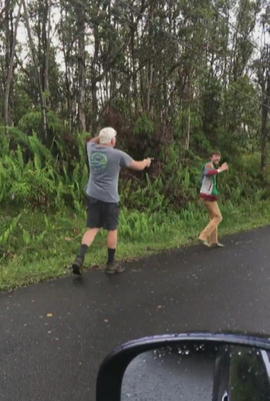