Mark, CEO of Mark Asset Management, said Netflix is forging its way in the entertainment industry and is becoming a staple in household video bundles, while still allowing room for other streaming services, such as Hulu or Amazon Prime.

Streaming incumbents have been facing threats this year as Disney, Apple and Comcast-owned NBCUniversal announced they are all entering the market.

“Look at the entertainment market much more broadly defined … Disney+ is a drop in the bucket,” Mark told CNBC’s “Squawk on the Street,” adding that the bundling of streaming services isn’t going to go away any time soon.

Disney announced last week the Nov. 12 release date of its highly anticipated streaming service, which will allow consumers to stream from the Disney vault and watch new content. It comes as a “bargain” at $6.99 per month, said Mark, who also owns shares of Disney.

“I can’t think of a family that has anybody under the age of 18 that wouldn’t seriously consider subscribing to it,” he said.

But that family-focused content may be what keeps Disney+ from beating Netflix, Mark and other analysts have said.

“We do not view Disney+ as a strong alternative to Netflix,” Suntrust tech analyst Matthew Thornton said in a note April 12. “Bottom-line, Disney+ features family content, while Netflix offers a much broader range of content with the majority of the most-searched content on the platform.”

Consumers can still bet on Netflix. Mark recently bought more shares of the company, calling it the “single best managed entertainment technology company in the world.”

Netflix has been looking toward advancement this past year to ward off threats. It’s in talks to purchase the historic Egyptian Theatre in Hollywood to allow the company to more easily put up its Netflix originals for the Academy Awards. And in mid-January, the company announced it was raising prices between 13% and 18% as a way to pay for the creation of more original content.

“Netflix is the future of film entertainment,” Mark said.

Tue Apr 16 , 2019
Veteran crawls across marathon finish line On Boston’s Marathon Monday, thousands of determined people ran across the finish line on Boylston Street. But one resilient man didn’t run across – he crawled. His name is Micah Herndon, and he is a Marine veteran who told himself he would do anything […] 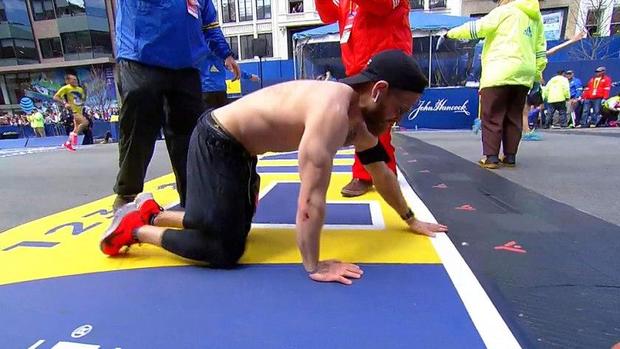