Fieldwood Energy CEO Matt McCarroll on the state of the oil market, Anadarko’s decision to go with Occidental’s buyout offer over Chevron and address environmental concerns over drilling in the Gulf of Mexico.

NEW ORLEANS — Federal agencies have approved nearly $226 million for 18 projects to restore open ocean and marine habitats that were decimated in the Gulf of Mexico by the 2010 BP oil spill.

The projects range from $52.6 million to study deep-sea habitats to $290,000 to find ways to keep sea turtles from swallowing or getting snagged on hooks or tangled in lines set out for miles along reefs.

They are described in a 490-page report released Tuesday.

The nonprofit Ocean Conservancy said it’s “the world’s first plan to restore the open ocean and deep-sea environment from a major oil disaster.”

The explosion April 20, 2010, on the Deepwater Horizon drilling rig killed 11 workers. There are varying estimates on how much oil was released. According to Ocean Conservancy, the well spewed 210 million gallons (795 million liters) of oil before it was capped 87 days later.

US CRUDE OIL 2019 OUTPUT EXPECTED TO RISE LESS THAN PREDICTED

The open ocean recovery plan was drawn up by the National Oceanic and Atmospheric Administration with help from the U.S. Fish and Wildlife Service, National Park Service, Bureau of Land Management, U.S. Department of Agriculture and U.S. Environmental Protection Agency.

The projects, expected to run two to 15 years, were chosen from about 1,600 submitted by the public, non-governmental organizations, as well as local, state and federal agencies.

The plan includes $126.2 million to study habitats in deep water and water between 100 feet (30 meters) and more than 490 feet (150 meters) deep. That includes $35.9 million for high-resolution mapping and analysis and $52.6 million to analyze damaged and undamaged habitats at those depths, learning more about the corals. Another $20.7 million would manage and protect corals and $16.9 million would develop techniques to grow and transplant them.

About $22.9 million is dedicated to four programs to protect whales and dolphins.

“We will develop and implement tools and techniques to reduce risks to marine mammals from vessel collisions, ocean noise, and human-caused and natural disasters,” Laurie Rounds, of NOAA’s Office of Habitat Conservation said during a news teleconference Tuesday.

Another $57.7 million would protect fish, including $30 million for a program to distribute and promote devices that let deep-sea fish released by anglers be returned gradually to the depths where they live.

When deepwater fish are brought rapidly to the surface, gases in their organs and tissues expand. That also makes it hard for them to swim back down, making them easy prey, the report said.

“Supplying fishermen with the tools and knowledge to minimize barotrauma-related mortality would result in increased survival of fish released during recreational fishing activities,” it said.

The Judiciary Committee voted to impeach. Here's what happens next

Sat Dec 14 , 2019
Congress is tasked with answering two questions: Did President Trump abuse his power, and did he obstruct Congress? If the full House decides that either answer is yes, he will be the third U.S. president to be impeached. The first charge relates to his dealings in Ukraine. He is accused […] 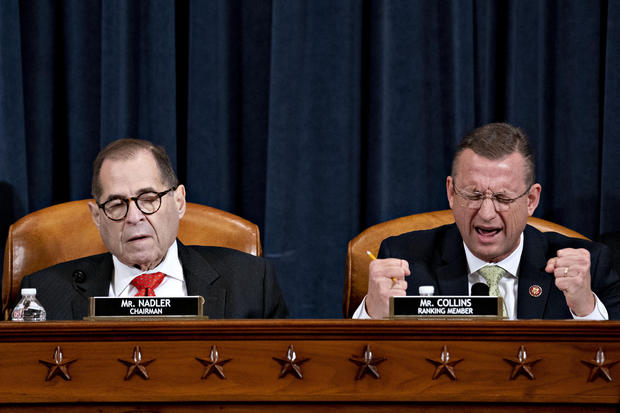